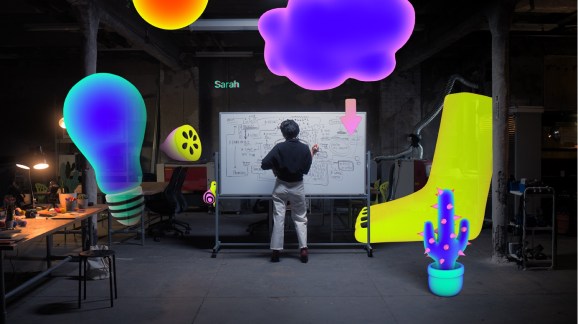 After having largely focused on convincing developers to create augmented reality apps for iOS devices, Apple today announced it’s bringing art-based AR into Apple Stores across the world. This effort will include city-specific [AR]T Walks, a globally available [AR]T installation, and educational sessions called [AR]T Lab. Developed in conjunction with New York City’s New Museum, all of the experiences will be free for visitors.

The [AR]T Walks bring participants through augmented parts of the cities of San Francisco, New York, London, Paris, Hong Kong, and Tokyo, where individual artists have used AR to bring their chosen past themes into public spaces. For instance, one artist has placed an experience in London’s Trafalgar Square, while another has done so in a specific plaza within New York’s Central Park. Each experience differs, with some offering light interactivity and others simply overlaying graphics atop the scenery.

The [AR]T installation, Nick Cave’s Amass, will be viewable in any Apple Store using a new [AR]T Viewer in the Apple Store app. Through the screen of an iPhone, iPad, or iPod touch, viewers will be asked to collect glowing, floating icons, described as “Ikon Elements,” to help create a “universe of positive energy right in the middle of an Apple Store.”

Last, but not least, [AR]T Lab is a 90-minute educational session codeveloped by New Museum’s Sarah Rothberg, enabling participants to learn about using the iPad app Swift Playgrounds to create AR experiences. [AR]T Lab lets attendees go hands-on with “whimsical objects and immersive sounds,” such as those in the image above.

In addition to adding AR software development kits to iOS, Apple has reportedly been working on its own AR headset, though the project was recently reported to have been cancelled. It’s still unclear whether that claim is accurate, but for the time being, Apple’s only way to experience AR is through iOS device screens.

The [AR]T experiences begin on August 10. If you’re interested in signing up for a session, you can do so from this Apple page.