Acute kidney injury, or AKI, is a condition in which the kidneys stop filtering waste products from the blood. It occurs quickly (in two days or less) and debilitates an estimated 1 in 5 hospitalized patients in the U.K. and 1 in 4 hospitalized patients in the U.S. Worse still, because it’s difficult to detect, AKI kills upwards of 400,000 people annually in both countries combined.

But there’s encouraging news on this front, courtesy Google parent firm Alphabet’s DeepMind. The U.K.-based AI research firm said it’s made progress toward automated systems addressing the 11% of failures to detect AKI deterioration in U.S. hospitals and the 30% of preventable cases globally.

Over the course of two separate joint studies conducted with the U.S. Department of Veterans Affairs and The Royal Free London NHS Foundation Trust (RFL), DeepMind’s health care division — DeepMind Health — investigated ways to flag AKI warning signs clinicians might otherwise fail to spot. The resulting pair of papers published in the Journal of Medical Internet Research (JMIR) and Nature Digital Medicine reveal the fruit of the organizations’ labor: an algorithm that can predict the presence of AKI up to 48 hours in advance and an app that cuts missed AKI cases from 12.4% to 3.3%.

“Over the last few years, our team at DeepMind has focused on finding an answer to the complex problem of avoidable patient harm, building digital tools that can spot serious conditions earlier and helping doctors and nurses deliver faster, better care to patients in need,” wrote DeepMind. “This is our team’s biggest healthcare research breakthrough to date, demonstrating the ability to not only spot deterioration more effectively, but actually predict it before it happens.”

The study DeepMind conducted with Royal Free involved Streams, a mobile assistant for kidney specialists that compiles a bedside review of medical information and taps an algorithm to flag AKI patient deterioration.

Although it doesn’t rely on AI, DeepMind reports Streams was saving clinicians an average of two hours a day shortly after its rollout two years ago. Efficiency only improved over time — specialists were eventually reviewing urgent cases within 15 minutes, a process that might normally have taken several hours — as did cost saving. Streams reduced the average cost of admission for a patient with AKI by roughly 17%, according to DeepMind. 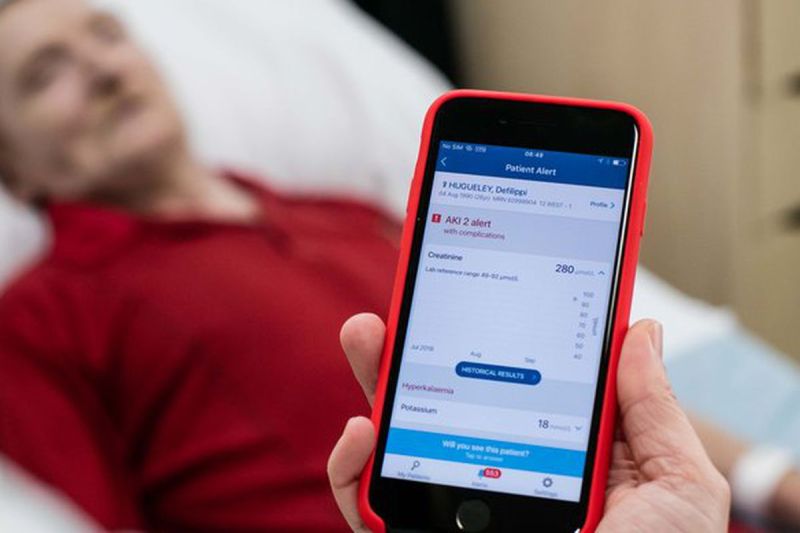 “Critically, these early findings from the Royal Free suggest that, in order to improve patient outcomes even further, clinicians need to be able to intervene before AKI can be detected by the current NHS algorithm — which is why our research on AKI is so promising,” wrote DeepMind. “These results comprise the building blocks for our long-term vision of preventative healthcare, helping doctors to intervene in a proactive, rather than reactive, manner.”

DeepMind reaffirmed that it’ll cede oversight of Streams to Google Health in the coming months, as previously announced, and that the development team will work alongside colleagues at Google to create tools designed to support health care practitioners. “The combined experience, infrastructure, and expertise of DeepMind Health … [with] Google’s will help us address critical patient safety issues and … [potentially] save thousands of lives globally,” wrote the company.

But brewing controversy still clouds Streams, despite the promising preliminary results. The more than 1.6 million patients whose records were analyzed in the app’s creation weren’t asked for their consent, leading the U.K.’s Information Commissioner’s Office (ICO) to conclude last year that the Trust had breached U.K. law. And critics maintain that Stream’s move to Google constitutes a breach of trust on DeepMind’s part, which had previously said it would operate the project autonomously from its sister company.

In an update on its investigation today, following the Trust’s completion of a data protection impact assessment, the ICO said that it has “no further outstanding concerns regarding the current processing of personal data within Streams.”

In the study published in partnership with the U.S. Department of Veterans Affairs, DeepMind attempted to predict AKI using a machine learning system trained on de-identified electronic health record data sets. They claim that the model not only accurately forecasted AKI in patients up two days ahead, but that it managed to identify 90.2% of the most severe cases that later required dialysis.

While making its predictions of deteriorating kidney function, the model highlighted the clinical information it considered most important and provided forecasted results for relevant blood tests. DeepMind characterizes this explainability as an important step toward addressing the “black box” problem of implementing AI in clinical practice.

“This information may help clinicians understand the reasoning behind the AI-enabled alert and anticipate future patient deterioration,” wrote the company. “This could provide a window in the future for earlier preventative treatment and avoid the need for more invasive procedures like kidney dialysis.”

DeepMind says the model was designed such that it might generalize to other causes of diseases like sepsis, and it says that it’s in discussions with the Department of Veterans Affairs about the next phases of the project.

Beyond AKI, DeepMind is involved in numerous health-related AI projects, including a trial at the NHS to develop an algorithm that can search for early signs of blindness. It’s working with the Cancer Research UK Imperial Center at Imperial College London to refine AI breast cancer detection models, an effort that recently expanded to Jikei University Hospital in Tokyo. And in a paper presented at the Medical Image Computing and Computer Assisted Intervention conference in September, DeepMind researchers revealed they’d developed a model capable of segmenting CT scans with “near-human performance.”

For its part, Alphabet has broadly invested in AI health care applications. Google’s Medical Brain team announced last spring that they’d created a mortality-predicting algorithm with 90% accuracy. Google AI researchers working with Northwestern Medicine demonstrated in May a system that can detect lung cancer from screenings better than human radiologists with an average of eight years experience. And last February, scientists from Google and Verily Life Sciences, Alphabet’s health-tech subsidiary, created a model that could accurately deduce basic information about a person, including their age and blood pressure, and whether they were at risk of suffering a major cardiac event like a heart attack.