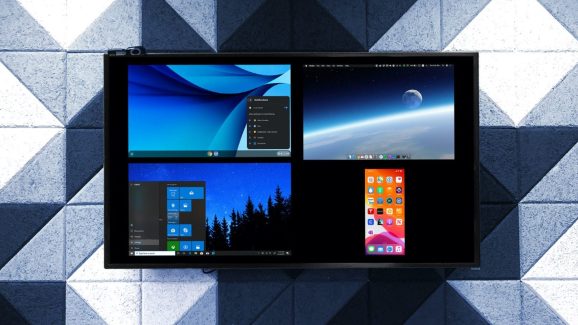 Apple’s AirPlay technology has long enabled Apple TV users to wirelessly mirror the screen of one iOS or macOS device at a time, but non-Apple devices and multi-screen mirroring were another story. Third-party developer Squirrel today announced a new version of its Ditto Receiver app that adds both capabilities to the Apple TV, including support for six different operating systems, though the features come at a fairly steep price that will only appeal to certain business and educational customers.

Ditto includes support for Android, Chrome OS, iOS, iPadOS, macOS, and Windows, and can simultaneously display four screens at once, such that an Apple TV could mirror four Chromebooks or a combination of Android, iPhone, iPad, and Windows screens at the same time. Squirrel’s user experience is intentionally simple by design: No wires are required, and each device relies solely on a Ditto Connect app, which needs nothing more than a specific room code to begin mirroring to the display.

On macOS and Windows machines, Ditto is able to share either the entire screen or a specific application; on the other platforms, full-screen sharing is allowed. Apple TV HD and Apple TV 4K models running tvOS 11 or later are fully supported for multi-platform and four-screen simultaneous streaming, while older devices — including the second- and third-generation Apple TVs running software version 4.4 or later — can stream your choice of iOS, iPadOS, macOS, and Windows at once, but not simultaneously, and without Android or Chrome support.

Splitting the screen into four quadrants obviously introduces some questions regarding resolution and mirroring lag, though Squirrel suggests that its performance is solid: 1080p mirroring at up to 60 frames per second, with a 30 millisecond latency, though that 1,920 by 1,080 resolution will be divided up across four displays, while lag and frame rate hits will likely be obvious, depending on networking and other factors.

Ditto is available solely by subscription — at $16 per month or $150 per year, it’s not the sort of app most users would buy for use at home. The Ditto Receiver and Ditto Connect apps are available to download on tvOS, iOS/iPadOS, and other platforms for a free 30-day trial before the subscription requirement kicks in.