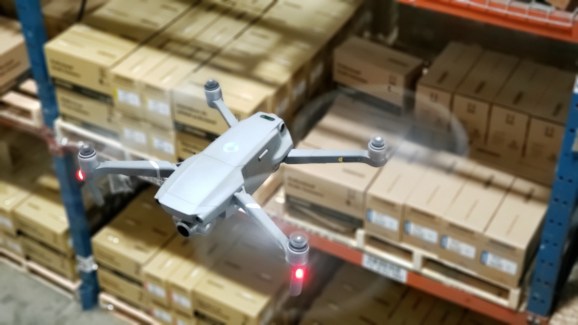 Gather, a company that uses autonomous drones for warehouse inventory, launched out of stealth today. Founded in 2017, the company of about 10 employees is based in Pittsburgh.

Gather’s founding team is made up of Robotics Institute at Carnegie Mellon University graduates, including cofounder and chief robotics officer Sankalp Arora, whose work together with a team at the Office of Naval Research on autonomous helicopters won the 2018 Howard Hughes Award.

Earlier this year, Gather closed a $2.5 million funding round to bring its products to market and grow its computer vision and software offerings.

Gather supplies software for the autonomous operation of drones that can connect with existing warehouse management systems and IoT devices such as motion sensors. Computer vision is then used to scan and count inventory.

The solution is about 60% cheaper than traditional methods that rely on people alone, Gather said. Gather software is currently used in an undisclosed number of warehouses, but an air cargo company was able to reduce inventory time from 8 hours to 15 minutes, and take inventory 10x more quickly than two employees with a forklift in another warehouse.

“People never have to leave their desk to go out and do an inventory,” Arora told VentureBeat in a phone interview. “We’re not outfitting these things with any specific hardware. It’s a drone that you can go buy at Best Buy.”

Gather was founded in January 2017 by Arora, Daniel Maturana, Geetesh Dubey, and Robb Myer, an entrepreneur-in-residence at CMU.

Since Gather can connect with IoT devices, drones can deploy anytime a motion sensor is triggered. Arora argues a team of drones can multiply savings for warehouses by eliminating the need to install cameras for security or surveillance.

While drones using Gather’s computer vision can read barcodes and count boxes, an added bonus is providing hourly inventory image sets that warehouse managers can use to assess inventory reports or look back through records.

Cameras are also used to help the drones avoid running into objects.

“Our semantic mapping enables a single camera to map identified objects up to a range of 150 meters,” Arora said. “So what that means is we can follow rules of engagement in these facilities. For example, if a manager tells us ‘I don’t want this drone  within 15 meters of a forklift,’ we can make a map these using semantic cues from known objects and map these objects by following rules of engagement.”

Computer vision by companies like Autodesk and Indus.ai are being applied in industrial environments to improve safety and compliance with regulations. Such systems may also play a role in the future to orchestrate the movement of people and machines as more robots enter warehouses. A number of challenges stand in the way of fully autonomous warehouses, Arora said.

“I think a good way to put it is you have to deal with unpredictable decision makers, as well as flexibility of the environment as you are making these things automated. And that is where I guess the final hill for robotics is,” he said. “You’ve got amazing robots making our cars, doing manufacturing on manufacturing lines, but as as soon as the environment becomes dynamic, it changes and you have to interact with humans or you have to be flexible given the environment, then the perception challenges associated with it. And the planning challenge associated with it becomes several orders of magnitude more difficult.”

Recent robotics ramp-ups include Brain Corp’s initiative to bring robots to warehouses and a $46 million funding round for Fetch Robotics in June, while DHL introduced a $300 million investment last year to quadruple robots in its facilities in North America.

Amazon, who rolled out its new Pegasus sorting robot in June, predicted earlier this year that fully autonomous Amazon warehouses are at least 10 years away.