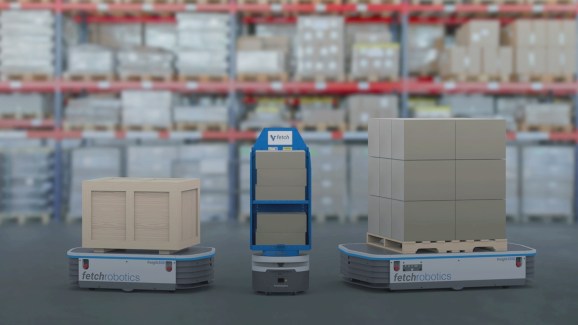 Founded in 2014, Fetch Robotics creates autonomous robots, powered by cloud-based software systems, that operate in locations such as warehouses, factories, and distribution centers. The robots can be used to transport goods and materials around warehouses, gather data automatically — including inventory cycle counting — and even carry out research.

Underpinning all of this is a cloud-based platform that bypasses the need for an on-premises server installation. Companies can centrally access data from their robots, systems, and devices — across all their facilities — to garner insights.

Robotics has emerged as a major driving force across industries, with the likes of Amazon using automated warehousing systems to cut costs and expedite deliveries and U.K grocery giant Ocado dabbling in all manner of futuristic picking and packing technology, such as robotic arms that can handle delicate items.

A recent report released by Deloitte and the Manufacturing Institute suggested there is a growing gap in the manufacturing industry “between the jobs that need to be filled and the skilled talent pool capable of filling them.” The study indicated that there may be up to 2.4 million unfilled positions by 2028, with a negative economic impact of more than $2 trillion.

A number of companies are working toward supporting the “fourth industrial revolution,” which is often defined by the proliferation of transformative technologies such as AI, automation, robotics, quantum computing, and the internet of things (IoT). Coursera, for example, recently raised $103 million to develop new courses to support workers for this future.

Elsewhere, startups are working toward making robotics accessible to companies of all sizes. Los Angeles-based InVia Robotics, for example, is a subscription-based “robotics-as-a-service platform” for ecommerce distribution hubs and warehouses. And London-based Automata is setting out to democratize industrial automation with a more affordable desktop robotic arm.

Fetch Robotics had previously raised around $48 million in equity funding, including its $25 million series B round from 2017, and with its fresh cash injection the San Jose-based company plans to grow its platform globally into new markets and invest in R&D.

“The competitive pressures for excellence in logistics have never been greater,” added Fetch Robotics CEO Melonee Wise. “Our Autonomous Mobile Robots and cloud platform enables our customers to meet their customers’ demands while meeting their own financial objectives.”