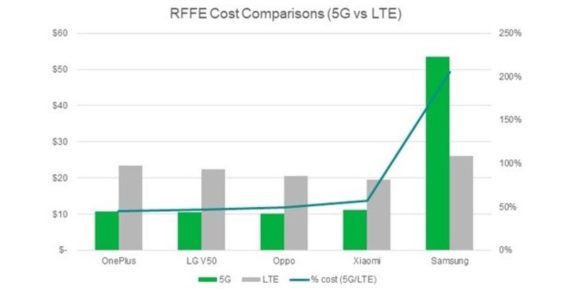 A chart compares the costs of five 5G phones' RF front end solutions, only the last of which uses millimeter wave antennas.

If you’ve wondered why many 5G smartphones have launched with $1,000 U.S. price tags while similar devices start at only $700 elsewhere in the world, a new IHS Markit teardown report provides an explanation: Early millimeter wave (mmWave) components are adding considerable expense to the fastest U.S. 5G phones, while non-mmWave 5G devices are substantially less expensive to produce and sell.

Three of the four top U.S. carriers began by launching mmWave-based 5G networks, relying on “small cell” towers that can deliver upwards of 2Gbps speeds when located at relatively short distances from phones. Though some mmWave-compatible devices are now available, the challenge of deploying enough mmWave small cells to cover entire cities has led all of the carriers to embrace slower but longer-distance 5G service using non-mmWave, “sub-6GHz” towers to blanket larger areas.

IHS’s new report builds on its previous 5G teardown findings, in which the firm found that Qualcomm’s early 5G chips were dramatically more space-, power-, and resource-efficient than rival Huawei’s — and similar to Samsung’s — after tearing down a collection of Huawei, Qualcomm OEM, and Samsung devices. This report focuses solely on five 5G phones built with Qualcomm modems and radio front ends, looking at the comparative costs of their radio transceivers and antennas.

As between mmWave and non-mmWave 5G devices, the component cost differences are stark. The four non-mmWave phones needed $12 or less of 5G parts, versus nearly $55 of 5G parts in a Samsung Galaxy S10 5G with millimeter wave hardware. IHS describes the price difference as coming at “a staggering twice the cost” of existing LTE radio front end components, which already contribute around $25 to the bill of materials for that phone. OEMs individually decide how much of these costs to absorb or pass along to consumers, though retail and distributor markups multiply each new dollar when choosing the latter option.

Multiple mmWave antennas are partially responsible for the expense. Samsung uses three separate QTM052 antennas to connect to U.S. mmWave 5G towers, an engineering decision that enables its S10 5G to avoid “you’re holding it wrong” attenuation by switching to whichever antenna is exposed at a given moment. The antennas are placed at the top, left, and right edges of the phone, with none at the bottom where a hand is most likely to grip the device in portrait orientation.

While attenuation won’t disappear in second-generation 5G devices, IHS says, smaller and cheaper mmWave components are certainly coming. Qualcomm currently leads all global OEMs in millimeter wave technology, and is preparing a new generation of parts that will be easier to integrate into phones. IHS notes that other vendors such as Samsung, Huawei, and Apple (through its Intel acquisition) are all trailing Qualcomm to market with viable mmWave solutions, a situation that may well continue as Qualcomm continues to build on its early lead and expertise.

One alternative for smartphone vendors and carriers would be to solely support non-mmWave 5G, using devices that can connect only to sub-6GHz towers. Early 5G rollouts outside of the United States have focused almost exclusively on sub-6GHz frequencies with plans to support mmWave 5G later, while U.S. carriers mostly focused on mmWave 5G with second-stage plans for sub-6GHz support. It presently appears unlikely that most U.S. carriers will omit millimeter wave support simply to cut phone costs.

A notable exception is Sprint, which now has a nine-city 5G network in the U.S. based entirely on sub-6GHz towers, and just launched the OnePlus 7 Pro 5G — an $840 smartphone with no millimeter wave hardware, but the ability to achieve 500+Mbps speeds at a lower price than recent flagship 4G smartphones. Sprint’s network is likely to be absorbed into T-Mobile’s, however, and their future devices are expected to include support for both mmWave and non-mmWave 5G frequencies.