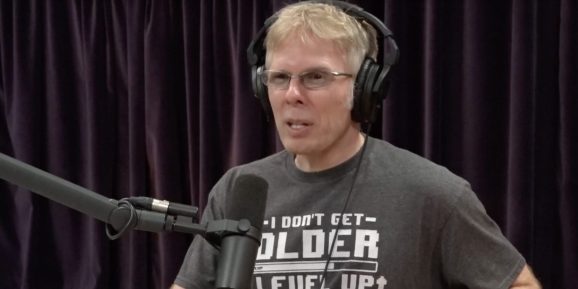 In the world of mixed reality hardware and software, few people have the expert-level credibility of Oculus CTO John Carmack, whose pioneering 3D work at id Software broke new ground on personal computers years before he turned his attention to bringing VR hardware to life. While Oculus’ owner, Facebook, recently suggested that the future of its Insight and Guardian motion-tracking technologies is in all-day wearable augmented reality glasses, Carmack is underscoring that this future isn’t immediately on the horizon, and that other companies in the space — particularly Magic Leap — have been underdelivering on their early hype.

The core issue, Carmack said on the Joe Rogan Experience podcast (via Next Reality News), is that technology still hasn’t advanced to the point where AR glasses can be made small enough for people to wear around all day. Right now, he says, Oculus could make a “sort of a shoebox-sized thing” that people could wear into the world, but it wouldn’t be socially acceptable in most places. Even if Oculus could cut the size down by three quarters into a swim goggle-sized wearable, he doesn’t believe that people would want to wear it for long periods, and “we haven’t built it,” he notes.

Carmack also struggled to define realistic consumer applications for the technology, noting that he was “skeptical of the broad utility” of a lot of the “little demos” that initially seem interesting. While Microsoft has found enterprise uses for its HoloLens AR technology, including training and collaborative engineering work, he said that Magic Leap oversold “what the actual capabilities are,” and suggested that average people aren’t going to spend thousands of dollars for AR headsets with limited fields of view and not-great gaming experiences.

Even companies that have recently come up with AR sunglasses aren’t quite there yet, Carmack insists. “There are a few companies that have made things that are sunglasses form factor that can do some little things with the display,” he said, “but they run out of battery very quickly.” The end goal, he suggests, is that “I grab my augmented reality glasses and then they do something useful for me for 16 hours.”

Given Carmack’s deep ties to the mixed reality community and work at one of the industry’s largest AR/VR engineering companies, his skepticism as to the current state of AR technology is noteworthy: The comments confirm that Facebook isn’t ready yet despite all of its efforts, and if a rival such as Apple is closer than Facebook to unveiling a viable consumer AR product, he seems as likely to be surprised as anyone. Check out the full video to hear his thoughts on AR and related technologies in greater detail.