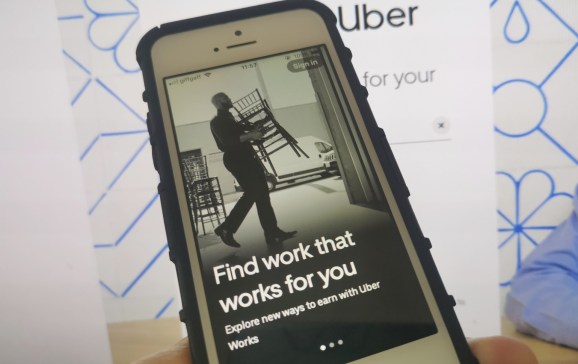 It had been rumored for a while, but Uber officially confirmed today that it is expanding beyond on-demand transport and into on-demand staffing for the recruitment industry.

The move represents a natural evolution both for Uber and the modern day workforce, which has pushed steadily toward temporary, part-time, and shift-based employment.

The Financial Times first reported last year that Uber was gearing up to expand its horizons with a new service called Uber Works, connecting recruiters with workers for short-term assignments — or “gigs,” to use today’s more popular parlance. Now, having tested the service for the past year, Uber has revealed what it has in store for recruiters and gig economy workers starting in Chicago, its inaugural launch market.

Similar to its core ride-hail service, Uber is quick to point out, Uber Works merely provides a platform for recruiters to find workers. Uber doesn’t want to be seen as the recruiter itself. Indeed, the company has partnered with staffing agencies such as TrueBlue, which take care of all the recruitment side of things — this includes managing pay and benefits. Similarly, Uber is also partnering with a number of education and training companies to “deliver services that support skill up-leveling and promote work re-entry,” according to the company, similar to what some of the Uber drivers receive.

TrueBlue is best known as an agency focused on the on-demand, temporary “blue collar” workforce, and as such that is exactly who Uber is targeting through its new app: laborers, warehouse workers, cooks, cleaners, customer service staff, waiters, bartenders, and more. Shift-workers, in other words.

Through the app, which is available for iOS and Android, workers can view shift information such as pay, location, skills required, and attire. The Uber Works app can also be used as a tool for tracking time, logging breaks, and for clocking in and out from their phones.

“We believe that finding work shouldn’t have to be a job in itself,” the company said. “For positions as diverse as being a prep cook, warehouse worker, a commercial cleaner or event staff, Uber Works aims to make it easier to find and claim a shift.”

This move by Uber should not come as a big surprise. The company had already delved beyond its core ride-hail service and reappropriated its technology for food delivery, with Uber Eats now representing a significant part of Uber’s business globally. Uber is also lending its technology to the trucking and freight realm to help match cargo with truck drivers.

But Uber Works feels like a seismic shift for the ride-hail giant, representing a far greater tangent than any of its previous deviations. Furthermore, Uber Works serves as evidence, if any was needed, that Uber is having to rethink its entire business in the chase to become profitable — the staffing and recruitment industry in the U.S. alone is a $153 billion industry, significantly more than the ride-hail industry.

Beyond the big-name incumbents permeating the recruitment realm, a slew of tech-infused upstarts have arrived on the scene in recent years to disrupt the billion-dollar industry. Job Today, for example, has raised north of $80 million for a similar proposition to Uber Works — it’s a mobile-first marketplace for matching workforce supply with demand at short notice. There are others, too, but what Uber has in its corner is unbridled scale, engineering talent, and brand recognition. Uber already claims around 4 million drivers globally, and it doesn’t take a great deal of imagination to see how Uber could leverage its existing shift-working user base in the future. “Finished your shift moonlighting as a driver? Get a few hours sleep, and then begin your day shift as a waiter!,” is one possible scenario here.

Uber’s evolution also follows a time-honored tradition that has seen all the major tech companies start out in one niche before branching into other areas. Amazon began as an online bookstore before expanding into a digital hypermarket, cloud platform, courier service, and video-streaming heavyweight. Similarly, Google has long evolved beyond its roots as a search engine, with all manner of related (and unrelated) verticals now under its auspices, including digital maps, email, shopping, productivity tools, autonomous vehicles, and much more.

For Uber, it was only a matter of time before it shook off its shackles and stretched beyond its bread-and-butter business that has so many inherent limitations. Not everybody wants to drive a car around all day, and not everybody wants to be driven around — but everyone needs a job, and every company needs people working for them. By expanding into the wider workforce, Uber has a much bigger pool of people to monetize, which can only work wonders for its bottom line.

But perhaps more than that, Uber is following a major trend. The global workforce has been shifting away from “permanence” toward short-term, temporary positions. This has led venture capitalists to back countless platforms that are catering to this new mobile, smartphone-toting workforce, such as Deputy, which helps companies manage their hourly paid workers; Shiftgig, which connect employers with short-term workers; and Jitjatjo, which matches service and hospitality businesses with temps.

In short, Uber Works is not only a natural progression for Uber, but the entire gig economy.