The Kindle Kids Edition and expanded parental controls weren’t the only things Amazon announced this morning. Also on tap was a new Fire HD 10, coming on the heels of the revamped Fire HD 7. Among the highlights are a speedier processor and improved battery life, alongside a picture-in-picture mode.

“We’ve made our best tablet even better with a faster processor, longer battery life, and faster charging,” said Amazon’s VP of devices Kevin Keith. “The all-new Fire HD 10 has everything you need for entertainment with plenty of storage for your favorite videos, games, music, and books at home or on the go — and still under $150.”

The new Fire HD 10 — the first refresh of the Fire HD 10 lineup in just over two years — shares its predecessor’s aesthetic, save a white colorway and a reinforced frame Amazon claims is up to four times as durable as Apple’s latest iPad Pro. The screen size and resolution remain unchanged at 10.1 inches and 1080p (2 million pixels, 224 pixels per inch), respectively, and there’s a familiar microSD card reader included.

But notably, the newly announced Fire HD 10 is the first in the Fire-branded tablet with a USB-C port (USB 2.0), which Amazon says delivers faster charging than before. It’s also packing a system-on-chip with eight cores clocked up to 2.0 GHz, which is double the core count and 0.2 GHz higher in clock speed compared with the old HD 10’s chipset. 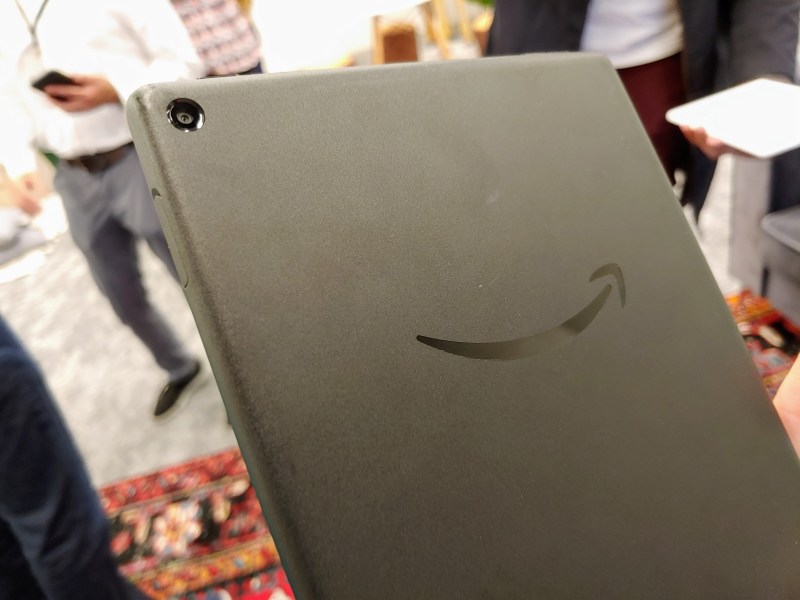 Among other nice-to-haves are a battery that lasts a claimed 12 hours on a charge (up from the previous-gen Fire HD 10 battery’s 10 hours), plus a SKU with 32GB of internal storage versus the old low-end model’s 16GB. There’s a custom-tuned pair of stereo speakers certified for Dolby Atmos content as well, and enhanced 802.11ac dual-band Wi-Fi.

The Fire HD 10 packs a mic and 720p front-facing camera complemented by a 2-megapixel rear-facing camera, the first two of which support Alexa Communications. (Alexa Communications encompasses Alexa Messaging, which lets you text or voice message friends and family with compatible Echo devices or the Alexa mobile app, as well as video calling.) Lastly, there’s a range of protective cases in new colors like plum, blue, black, and sage.

On the software side, the Fire HD 10 is running Android Pie 9.0 underneath Amazon’s proprietary Fire OS skin. Longtime series staples like screen sharing (which connects owners with a customer service rep who guides them through features step-by-step) are present and accounted for, as is ASAP, For You, Second Screen, Family Library, Blue Shade, and On Deck. But there’s a new thing or two on offer.

The Fire HD 10 also features a hands-free Alexa experience — that is, one in which invoking Alexa doesn’t require switching on the screen or connecting to a power outlet. It additionally sports Show Mode, a full-screen UI that displays visual elements (like album art, movie showtimes, and weather forecasts) accompanying Alexa’s audible answers, approximating an Echo Show.

Above: Picture-in-picture on the Fire HD 10.

Perhaps the other highlight is picture-in-picture mode, which minimizes videos to a draggable window that defaults to the screen’s lower right corner. Handily, invoking Alexa automatically minimizes movies and shows.

As with all tablets in the Fire lineup, the Fire HD 10 gives Amazon Prime subscribers access to Prime Video, Amazon Music, and more than 1,000 books and magazines with Prime Reading (as well as one free pre-released book a month with Amazon First Reads). They’re also afforded unlimited cloud photo storage in Amazon Photos and 5G for videos, documents, and other files, not to mention a Twitch Prime subscription that throws in free games, in-game content, and a Twitch channel subscription each month.

The new Fire HD 10 comes in plum, blue, and black in addition to white, and it starts at $149.99 with an expected ship date of October 30. Cases come in plum, blue, black, white, and sage for $39.99. Customers who preorder the tablet prior to October 30 get Minecraft at no extra charge.

For the uninitiated, FreeTime provides screen time controls that give parents the ability to set educational goals and more remotely. From the web or apps for iOS and Android, they’re able to define bedtimes past which kids can’t use their devices, as well as per-activity screen times and granular age filters for books, movies, and other content. Furthermore, they get usage stats indicating the amount of time their kids spend reading versus, say, playing games.

As for FreeTime Unlimited, it’s a curated selection of kid-friendly content that currently offers access to over 20,000 TV shows, movies, games, apps, books, and audiobooks aimed at children between the ages of 3 and 12. Depending on the subscription you choose, either one or up to four users can access the content library at once, including everything from Lego, Sesame Street, and National Geographic Kids videos to popular titles like My Little Pony Rainbow Runners, Sonic Dash, Clifford at the Circus, and Toca Life: After School. Importantly, all apps within FreeTime Unlimited’s library have been scrubbed of in-app purchases, ads, and links to social media. 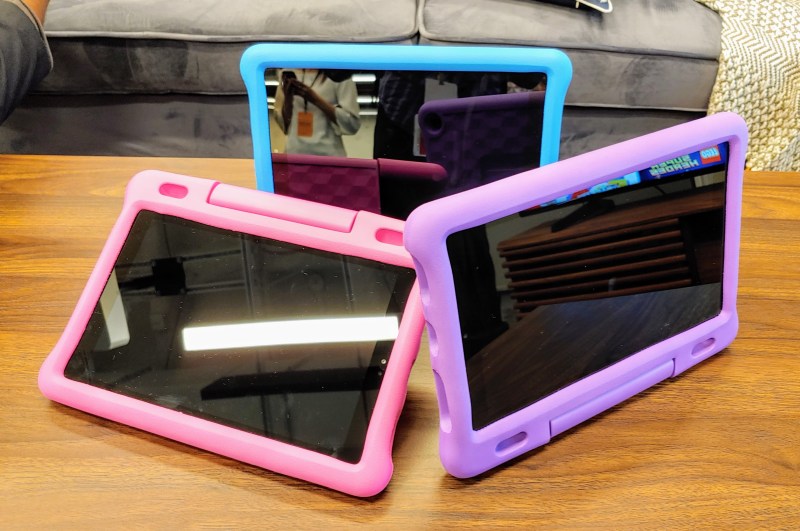 Amazon’s website offers Prime members an $83 annual family plan — under $7 per month — as well as a single-child option for only $3 per month. Those who don’t subscribe to Prime pay $4 per month for one child. FreeTime Unlimited content is available across Fire tablets, Fire TV devices, and Echo smart speakers and smart displays.