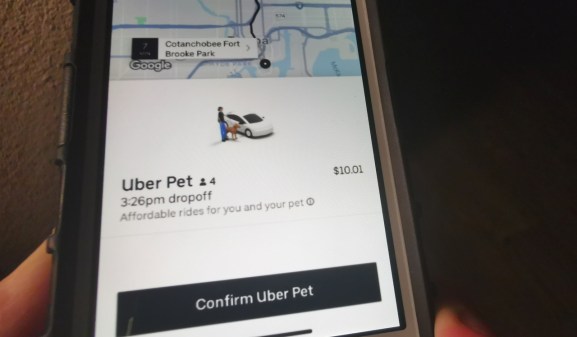 Uber is piloting a new service in the U.S. called Uber Pet, one that allows riders to request a driver that has pre-agreed to accept pets.

Compared to other expansions Uber has made of late, such as the Uber Works on-demand recruitment platform introduced last week, Uber Pet may seem like an incremental update. But when you consider the size of the pet industry, it really does make sense — 36% of households in the U.S. own a dog, meaning that Uber Pet could remove a fair bit of travel friction for a lot of people.

Uber’s existing pet policy requires drivers to accept service dogs only — that is, dogs trained to help someone with a disability, such as visual impairment. Aside from that, it’s left to the driver’s discretion whether they accept a rider’s pet inside their car, which is why Uber has so far recommended that riders contact their driver in advance to let them know they’d like to bring an animal with them.

With Uber Pet, the ride-hailing giant is now looking to smooth the communications process between riders and drivers regarding pet transport.

Uber Pet has actually been made available previously in a number of Latin American countries, including Brazil and Mexico, as well as a handful of Asian markets. The service was launched in Singapore back in 2017, but when local ride-hailing company Grab took over Uber’s Southeast Asia operations the following year, Uber’s pet-focused offering seemed a casualty of the merger.

Now Uber is preparing to bring the service to its biggest market — the U.S.

Starting on October 16, riders in Austin, Denver, Nashville, Minneapolis-St. Paul, Philadelphia, Phoenix, and Tampa Bay will see a new Uber Pet option inside the ride-hailing app. By hitting this button, the rider agrees to pay a surcharge — between $3 and $5, depending on the city.

According to Uber, most of this surcharge will go directly to the driver, which should give them sufficient incentive to accept rides that include pets. Drivers are opted into accepting Uber Pet rides by default, but they can opt out from within the preferences menu of their driver app.