Google has launched a handful of experimental apps designed to showcase how mental well-being can be built into digital products. The launch comes amid growing concerns over the ways smartphone and social media addiction may contribute to depression and loneliness, particularly in young people.

Google is touting its new Digital Wellbeing Experiments as a platform — less a way to tackle digital addiction directly and more a set of tools to “encourage designers and developers to build digital well-being into their products,” wrote Google Creative Lab’s Emma Turpin in a blog post.

Indeed, Google has compiled a “hack pack” PDF guide to getting started building digital well-being tools, in addition to an open source Digital Wellbeing Experiments toolkit, which is available on GitHub now.

To help developers think about building digital well-being into their apps, Google has created five of its own for Android. Here’s a quick peek at what each one does.

Post Box enables users to choose when notifications are sent to their phone so they are not constantly bombarded with Gmail, WhatsApp, and Facebook alerts.

We Flip is kind of like a group “do not disturb” app, so in social settings everyone who activates the app can effectively decommission (or lock) their phone. Anyone can unlock their device at any time, but doing so will end the session for everyone — it’s designed to discourage users from staring at their phones while having dinner.

Desert Island challenges users to go a whole day accessing only “essential” apps. The user chooses which apps they really can’t go without — such as camera, Uber, and Spotify — and then aims to stick to those for the day.

Morph promises to help users stay focused by letting them create different “modes,” keeping only apps relevant to that mode active. For example, during “work” mode a user may want to only access Slack, Gmail, and Dropbox, while in “holiday” mode on weekends they may only wish to interact with Spotify, Uber, and Google Maps. Modes can also be activated based on a user’s location. 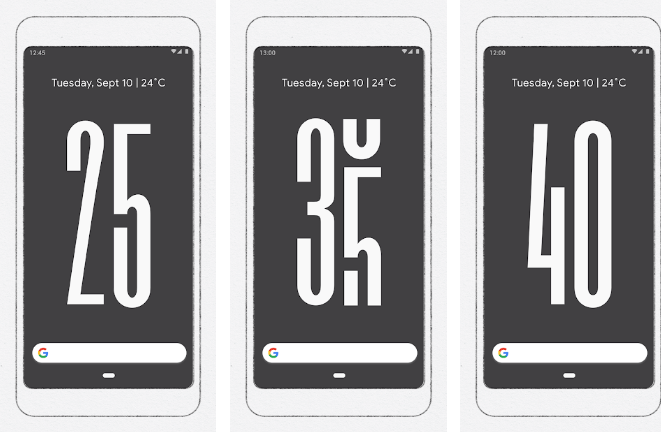 Unlock Clock is a pretty simple app — it’s basically a homescreen wallpaper that counts and displays the number of times a user unlocks their phone in a day.

As one of the “big two” in the smartphone operating system world, Google holds a great deal of sway in terms of how digital services are delivered and presented on its platform. In response to growing concerns over the impact technology is having on people’s mental well-being, Google has in recent times rolled out a bunch of new features to Android — including app-limit timers and a wind-down mode. It is also now requiring Android handset makers to include digital well-being tools in their devices by default, which may simply involve using Google’s own services.

Elsewhere, Samsung, the biggest Android phone maker in terms of shipments, has included mental well-being features for a while already, including an integration with Calm’s mindfulness and meditation programs. And both Facebook and Instagram introduced trackers to help users limit their time on social media. Separately, Apple offers a bunch of tools to help its users manage their screen time on iPhones and iPads.

Throw into the mix the myriad “stripped-down” lightweight phones that are now coming to market, and it’s clear there is a growing demand for “switching off” and focusing on the real world.

This is why Google is now looking to target the development community. These experimental apps may prove useful in their own right, but ultimately Google wants to achieve buy-in from the design and developer community to ensure more people are tackling the overarching problem.

“Anyone can use the platform to share their ideas and experimental tools to help people find a better balance with technology,” Turpin said.

In fact, a third-party experimental app is already available through the program. London-based design studio Special Projects has launched an app called Paper Phone that lets users create and print a personal booklet of the key information they’ll need that day — maps, contacts, appointments, and so on, and take it with them as a sheet of paper.

Anyone else interested in presenting their own digital well-being experiment to Google is encouraged to submit their ideas here.