Google launched five experimental mobile apps this week in an effort to encourage third-party app developers to build digital well-being tools into their own products. The general message to the development community was this: Here are some functional prototypes of what we would like to see more of on Android, now go and build your own.

Among the experimental apps were some genuinely interesting propositions, including Post Box, which enables users to choose when notifications are sent to their phone so they are not constantly bombarded with alerts from Facebook, Instagram, Gmail, and the rest. But one of the apps that really stood out, even in its admittedly embryonic form, teases a feature that holds a great deal of potential in a world where the boundaries between “work” and “leisure” are increasingly blurred. And there could be a strong case for building some of its functionality directly into Android.

The app in question is called Morph, and it promises to help users focus by only showing apps that are relevant to what they are doing at a specific moment. In effect, the user creates different modes based around times or locations and then selects which apps they want to see when the phone switches to that mode.

Morph is actually a Launcher that you can use to customize how your default homescreen looks. To use Morph post-configuration, you will need to set the app as your default Launcher.

When you first launch the app to set things up, you will be asked to create new modes. In these examples, I’ve created one for “vacation” and selected specific days and times it should be active, and one for “exercise,” which I chose to activate automatically when I enter a local gym. 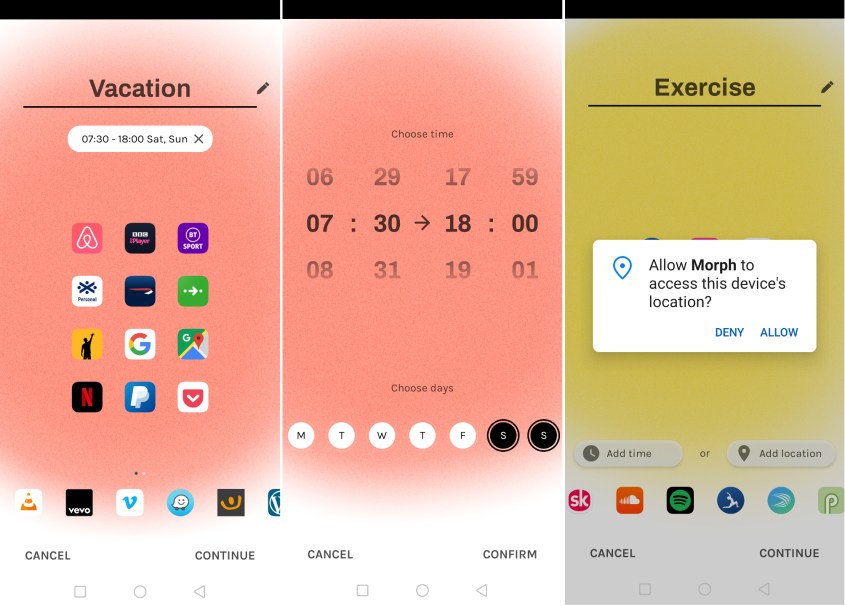 Morph asks the user to select which apps will be visible when each mode is active — so on vacation I might want access to Google Maps, Pocket, a ride-hailing app, Airbnb, and Netflix. While working out, I might only want to see Strava, Spotify, and a few others.

The crucial thing about Morph is that it automatically switches to these modes when it encounters the preset times or locations. You can quit these modes at any time, but there’s perhaps just enough friction to encourage you to stay the course. 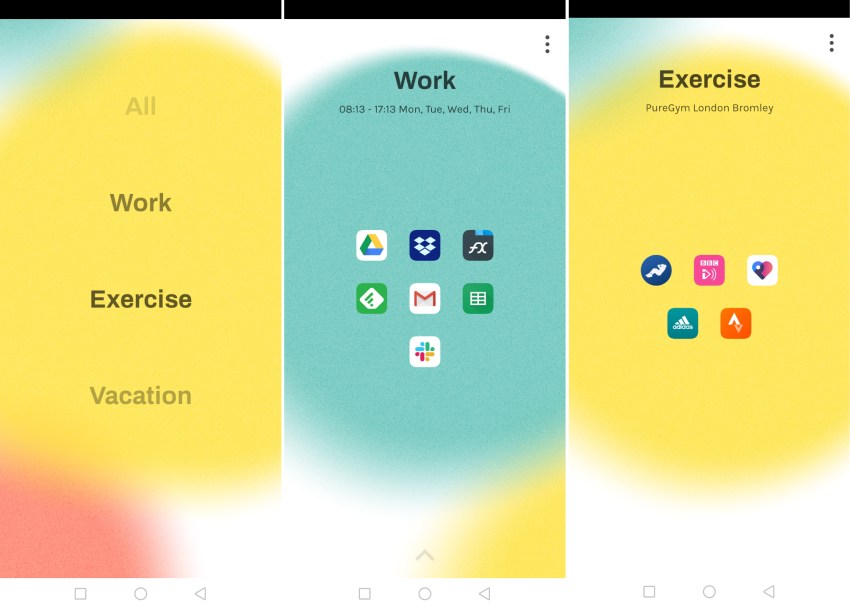 Without getting much deeper into the nuts and bolts of Morph, I should note that it is still a little buggy and far from perfect — the design and layout leave a lot to be desired. For example, to add apps to one of your modes, you have to scroll endlessly through your own apps — this will take a while if you have hundreds on your device. Moreover, most people probably don’t recognize an app by its icon alone, with a few notable exceptions — Morph doesn’t tell you the name of the app.

Above: Morph: Adding apps to a new mode

Even more noticeable, activating a mode doesn’t actually stop alerts coming through from other services. Certainly, based on my tests, WhatsApp messages still came through in modes that didn’t have the app selected.

Throw into the mix the fact that all the modes I created seemed to vanish overnight, and it’s clear that Morph is more a proof of concept than anything else. But it doesn’t really promise more than that for the moment — Morph is just an early-stage experiment, so we can forgive all of the above. What Morph does highlight, though, is the appeal of compartmentalizing our smartphone use based on personally determined criteria, and using automation to enable it.

Over the past year or so, we’ve seen a plethora of lightweight, stripped-down mobile phones designed to help people engage in a little digital detox, but none of these stands much of a chance because it’s difficult for people to live their lives without full smartphone functionality. We can’t seem to do without a good camera and access to work emails, ride-hailing services, music, podcasts, messaging, maps, and all the rest. Google’s Morph app demonstrates how smartphones could be designed with built-in features that help people “switch off” when they can.

While it’s true that Apple and Google have in recent times brought a bunch of new features to Android to encourage people to use their phones less, these don’t go far enough. Companies are increasingly embracing bring-your-own-device (BYOD) policies in the workplace, allowing workers to use personal smartphones for work purposes. But this can make it difficult for individuals to switch off, so all those work emails keep coming through in the evenings, on weekends, and on vacation. Of course it’s possible to manually deactivate alerts for services such as Gmail, Slack, or Twitter, but there’s just enough friction that many people don’t bother doing it.

With Android 10, which started rolling out to Pixel phones last month, Google introduced a new feature called Focus Mode that pretty much lives up to its name — it allows you to choose the most distracting apps on your device and “silence” them with one toggle of a switch.

But it would be great if users could automate some of this process, allowing them to automatically turn off all their work apps (Gmail, Slack, Twitter, etc) as soon as they leave the office using geofencing smarts, or by setting times and days in advance.

There is room for iteration here in terms of how Google might implement the basic functionality of Morph directly into Android — being able to create different profiles for different situations (driving, exercising, vacation, etc) could be a good addition.

Google could even combine the best features of Morph with Post Box, one of the other experimental apps launched this week, so that users could receive alerts for specific apps at specific times.

With these experimental apps, and the other well-being features Google has built into Android lately, the company is clearly trying to address a general wave of anti-smartphone sentiment. But there’s still a lot of work needed to give users greater granular control over the barrage of alerts and notifications they’re subjected to around the clock.