Microsoft’s Power Platform is a business tool that lets anyone analyze, act, and automate across their organization. In 2019, that means more AI features, analytics, and data visualization. Microsoft’s pitch for the Power Platform is that anyone at your company can be a developer.

Before we dive into the features, a quick note on the rebranding. Microsoft has to rebrand one of its products every quarter or it’s not allowed to keep calling itself Microsoft. Microsoft Flow launched out of preview in October 2016. The IFTTT competitor was always more about automation than workflows — it just took Microsoft three years to realize it.

Oh, and the new RPA capability in Power Automate is called UI flows, so that would have been confusing. UI flows in Power Automate is now in public preview. Creating a UI flow is a point-and-click experience, though it does require some coding experience. The RPA feature turns manual tasks into automated workflows by recording and playing back human-driven interaction with software systems that don’t support API automation. Since Power Automate has prebuilt connectors for more than 275 apps and services that do support API automation, Microsoft claims it now has an end-to-end automation platform “capable of reinventing business processes for a wide range of workloads across industries.”

“You’ll actually be able to use Power Automate to not only automate and orchestrate tasks across APIs, SAS providers, and databases, but also to actually do a UI-based recording on Windows desktop and have that run as part of your normal automation,” Charles Lamanna, CVP at Microsoft, told VentureBeat. “This is really interesting for our customers and is the number one request from them. It allows them to go integrate with legacy systems that don’t have APIs. In the past, the only way to get an API to a legacy system [was] by asking IT or developers to build it. But they will actually be able to go record what they do as part of their day-to-day job in that Win32 application, in the browser, or on their PC. So that new RPA capability is a really transformative element — we’re expanding what can be automated with Power Automate.”

Microsoft offers an example of an insurance claims processing company with clients filling out digital and paper forms and communicating through email. The claim is processed on the cloud while staff also maintain paper records and legacy applications. Power Automate could theoretically automate the whole thing: digitized data from scanned paper forms processed with AI, and legacy systems processed with RPA.

If the requirement of needing some code experience for UI flows scared you, you’ll be happy to hear about Power Virtual Agents, also in public preview starting today. Power Virtual Agents let “subject matter experts” in your company (customer service, sales, marketing, finance, HR, and so on) create bots with a guided, no-code graphical interface. Think of it as democratizing bot creation. No data scientists, developers, coding, or AI expertise is needed. Because Power Virtual Agents are part of the Power Platform, you can use the prebuilt connectors to have your bot talk to your backend systems or call an API. 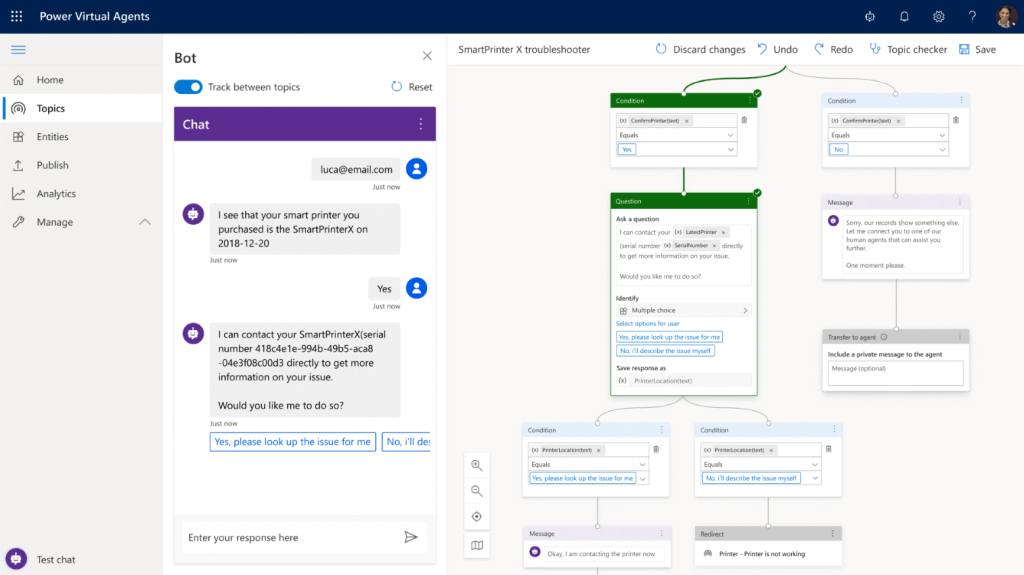 “You’ll be able to create a chatbot that can work inside of Teams, in a Facebook Group, [and] text message, as well as in a little control that you can embed in your application,” Lamanna told VentureBeat. “You’ll be able to build entire experiences by clicking and dragging and dropping, without having to write any code.”

If this sounds familiar, it’s because Power Virtual Agents rely on Microsoft’s Bot Framework, which lets developers build chatbots. So if you do want to add some code or more complex capabilities, Azure Cognitive Services and Bot Framework are just a few clicks away.

Separately, Microsoft is bringing its workplace collaboration tool Teams closer to its Power Platform. Power Platform dashboards, apps, and automations are available within Teams — adaptive cards and bots can be accessed directly through conversation. Power Apps creators can now publish their apps directly to their company’s app library in Teams. By the end of 2019, Microsoft will let users pin Power Apps to their Teams’ left rail. Furthermore, new Power Automate triggers and actions are now available within Teams for common team and personal tasks.

In 2020, Microsoft promises Power BI will get the ability to create rich adaptive cards in Teams conversations and an improved tab experience.