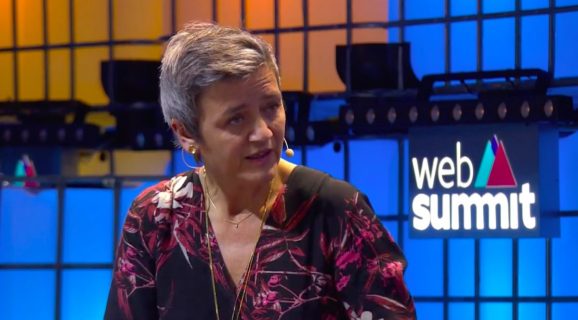 Margrethe Vestager, executive vice president-designate of the European Commission for a Europe fit for the Digital Age, speaking at Web Summit.

Europe’s competition commissioner said that while she remained optimistic about technology’s role in society, tech giants must do more to curb their abusive behavior or face greater regulation. However, she was reluctant to back calls for breaking these titans up, arguing that such a move would be unlikely to solve the big issues.

“From a competition point of view, you would have to do something where breaking up the company was the only solution to [their] illegal behavior,” said Margrethe Vestager, who will be getting an expanded role under the new European Commission. “We don’t have that kind of case right now. I will never exclude that that could happen. But so far, we don’t have a problem that big, where breaking up a company would be the solution.”

Vestager appeared at the Web Summit in Lisbon, where she was interviewed on stage by Laurie Segall, who was a CNN technology correspondent for a decade before leaving this year to launch media startup Dot Dot Dot Media. Segall introduced Vestager as one of the people most feared by Silicon Valley.

Indeed, over the past five years, Vestager has become one of the toughest critics of big tech, leading a crusade that has included the investigation into Apple’s Irish tax breaks that found the company had dodged more than $14.5 billion in taxes. She also accused Facebook of lying to regulators to get approval for its WhatsApp acquisition.

And she has so far levied three antitrust fines against Google: $2.72 billion for abusing its dominance in search to boost its comparison shopping service, a $5 billion penalty for abusing the dominant position of its Android mobile operating system, and $1.69 billion for abusing its dominant position in search to force third-party sites to favor its own ad network while freezing out rivals. And there are indications that Google’s AI-powered job platforms are now under scrutiny.

During a press conference earlier in the day, Vestager also confirmed that she’s been getting lots of antitrust complaints about Apple Pay and has begun scrutinizing the service, according to Reuters.

Just when the big tech companies thought they were going to get a fresh start, the new European Commission reappointed Vestager to a new five-year term and expanded her portfolio to more broadly include technology policy, in addition to antitrust.

Considering she’s emerged as a kind of tech giant slayer in recent years, it was somewhat surprising that she wasn’t ready to join the chorus of voices calling on governments to break these companies up. In the U.S., presidential candidates such as Elizabeth Warren have been vocal about the need to break up companies like Apple, Google, Facebook, and Amazon to put a limit on their power.

On the one hand, Vestager applauded the U.S. for finally waking up to the need for regulation and enforcement.

“What I sense is a very renewed — not only interest, but also engagements by U.S. authorities to start asking questions, to start engaging, to start investigating, to say, ‘Well maybe there’s an enforcer role for us here as well.’ And that is very, very welcome.”

But while Vestager is adamant that there are many big issues to address, she’s not yet convinced that downsizing tech giants is a viable solution.

“The problem in that debate is that the people advocating for it don’t have a model as to how to do this,” she said. “And if you know the story about an [ancient] kind of creature, when you chopped off one head … I think one, two, or seven came out. So there is a risk that you do not solve the problem. You just have many more problems … I am much more in the line of thinking that when you become that big, you get a special responsibility.”

She also explained that her willingness to confront these companies was not out of an anti-American bias, as President Trump and others have claimed. Rather, she sees the power amassed by these companies as limiting smaller rivals’ ability to compete and drive new innovations.

“There’s a risk that the many interesting [smaller] companies … have no chance of competing,” she said. “If tech sort of gets to be something that is only embedded in giant companies, then it is beyond our democracies. Then I think we lose trust in technology. And part of my mission is that we build trust in technology by making sure that we can reach the potential.”

What she would like to see is companies taking more actions that match their words. In the case of political advertising, she praised Twitter for its recent announcement that it would end such ads and wondered why Facebook was having difficulty doing the same. Beyond that, she asked why many platforms seem willing to tolerate so much abusive behavior.

“The bottom line of all of this is that we may have new technology, but we do not have new values,” Vestager said. “We have discussed in depth, at length, in the real world what we want to accept and what we will not accept. I simply do not understand why that is not the same thing in the digital world … Maybe we should do even more [online] because the risk is that we completely undermine our democracy.”

Specifically, she called on Facebook CEO Mark Zuckerberg to do more to address abuses: “If he himself put action behind his words, we would see change rapidly. And that would be very welcome … And I’m not the CEO of Facebook … but I think the time has come where they should also put action behind their words.”

Under her new role, she will be responsible for making regulations around artificial intelligence. She said this is an area where she believes there is immense potential to solve big problems, like healthcare and climate change. But regulating AI will be “very tricky,” she said, because of the risk that rules can quickly become outdated.

“AI is developing, and that is wonderful because I see no limits as to how artificial intelligence can support what we want to do as humans,” Vestager said. “But we need to get in control of the cornerstones so that we can trust it … Because if we accept bias and we basically just take the world we have right now and [transfer it to artificial intelligence], we set [those problems] in stone.”

Despite growing pessimism about the role of technology and the influence of big tech companies, Vestager said she retains hope that problems can be managed and regulators can help ensure trust between citizens and the products that are changing their lives.

“Well, if I’m an optimist, this is because I think that it’s a moral obligation,” she said. “[P]essimists really never get anything done, because you think it’s going to be worse tomorrow, so why bother?”