Whoop, a company that meshes wearables with machine learning and number-crunching analytics to help athletes optimize their performance, has raised $55 million in a round of funding led by Foundry Group, with participation from Two Sigma Ventures, Accomplice, Thursday Ventures, Promus Ventures, Silicon Valley Bank, and a host of notable angel investors, including Netflix cofounder and former CEO Marc Randolf.

The series D round constitutes a mix of equity and debt, though the company isn’t revealing the specific breakdown.

Founded in 2011, Boston-based Whoop operates in a similar field to the likes of Fitbit and Apple, insofar as it offers a wearable (called a “strap”) designed to help athletes — professional and recreational — track their performance. However, Whoop is striving to set itself apart by helping teams or individuals drill down into their numbers and unlock meaningful insights they can take action on. Indeed, a criticism often levied at health-tracking devices is that while they’re good at giving you numbers relating to steps walked, miles run, hours slept, or calories burned, it’s often not obvious what you’re supposed to do with that data. This lack of follow-through can lead users to abandon their wearables altogether.

The Whoop is a wrist-worn device with no alerts or display — it’s also not capable of counting your steps, and it doesn’t have built-in GPS to measure your runs. Users will need to sync their Whoop strap with their mobile phone or web app to access their vital stats. 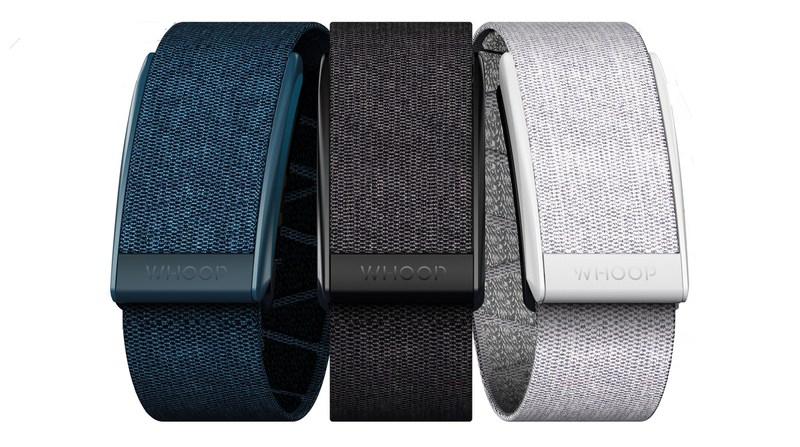 Whoop has been built purely to track physiological metrics, such as heart-rate variability (HRV), resting heart rate (RHR), and sleep performance. It crunches this data to calculate levels of fatigue and stress on the body, allowing the athlete to optimize their training schedule and sleep and to track how their body is evolving and improving over time time. HRV, for example, measures the variation in time between each heart beat, and mapped against physical performance it can help determine optimal training loads.

Underpinning all of this is machine learning smarts that power its physiological algorithms. “We’ve collected data on tens of millions of sleeps and workouts using machine learning together with physiologically-inspired models, enabling us to provide personalized predictions and insights,” Whoop cofounder and chief technology officer (CTO) John Capodilupo told VentureBeat.

While Whoop’s wearable and analysis software is used by professional athletes such as sports teams in the National Basketball Association (NBA) and Major League Baseball (MLB), the company also offers a consumer-focused product. Rather than selling the hardware outright, however, Whoop packages it as a membership service starting at $30 per month, with a minimum six-month commitment.

After the 6-months is up, the customer is free to cancel their membership and keep their Whoop wearable alongside access to all the data leading up to the membership’s end date. However, the device won’t deliver any fresh insights or analytics.

Whoop’s consumer membership offers a built-in “strain coach” that metes out exertion level recommendations based on the body’s recovery, and when a training session begins users will be told whether they need to push harder or pull back.

Above: Whoop in operation

Whoop had previously raised around $50 million, including its $25 million series C round last year that included such big-name investors as Twitter CEO and cofounder Jack Dorsey. With another $55 million in the bank, Whoop said it plans to further develop its product and membership offering for the consumer market.

“We will continue to grow our membership globally and make Whoop the best experience for our members,” added Whoop founder and CEO Will Ahmed. “Human performance is a new category and Whoop has emerged as both the pioneer and the market leader.”

Whoop’s investment comes hot on the heels of Google’s chunky $2.1 billion Fitbit acquisition, a deal that’s expected to close next year pending regulatory approval. Fitbit is one of the biggest brands in the fitness wearables space, but it has struggled to maintain revenue growth amid increasing competition from the likes of China’s Huawei and Xiaomi, which have brought more affordable trackers to market.

Whoop’s core differentiator is that it’s not targeting the general fitness enthusiast and helping them obsess over their daily step count. With a subscription model and a focus on heart rate and sleep, it’s evidently targeting performance geeks — those looking to improve their 5K or marathon times by optimizing the way they train and rest.