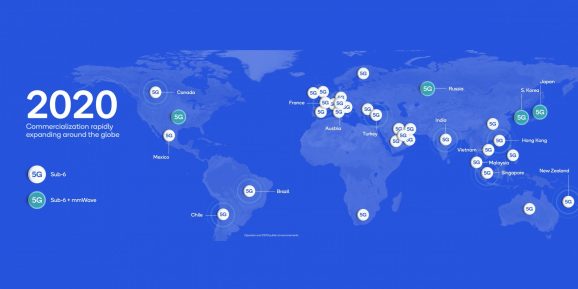 According to maps shown by Amon, the mid-band (sub-6GHz) flavor of 5G is going to spread far and wide during 2020, including initial rollouts in Canada, Mexico, Brazil, Chile, Austria, France, Turkey, India, Vietnam, Hong Kong, Singapore, and South Africa. Additionally, faster but shorter-distance millimeter wave 5G will be deployed in Japan, South Korea, and Russia during the year.

U.S. carriers are in the process of rolling out 5G across both millimeter wave and sub-6GHz bands. Verizon, AT&T, and T-Mobile have all released millimeter wave 5G networks and devices, while Sprint is exclusively using sub-6GHz spectrum. The top three carriers are all committed to offering 5G at some point using both sets of frequencies.

Qualcomm’s network roadmaps are particularly significant because of the company’s outsized role in providing 5G chips and IP to both carriers and OEMs across the world. However, the projections are subject to change based on unexpected regulatory developments.

Over the past 24 hours, for instance, France’s government reportedly delayed the auction of 5G wireless spectrum until at least March 2020 due to continued squabbling over both pricing and the spectrum to be sold. Similar questions over 5G spectrum availability and government readiness have clouded countries such as India and Belgium, delaying their launches while other nations have moved forward. But there’s been plenty of forward momentum as well. In May, the EU required member nations to support 26GHZ millimeter wave by the end of 2020, paving the way for high-speed 5G in 2021.

On the device availability side, Amon noted that 5G will become available in 2020 across its entire portfolio of products — its Snapdragon 6-, 7-, and 8-series chips “and beyond.” Premium-tier smartphones will include 5G support “regardless of coverage” in a given market, with numerous OEMs helping to bring 5G technology to mid-tier devices as an increasing number of carriers across the United States, South Korea, and Europe move to unlimited data plans.

Beyond phones, PCs with integrated 5G will also be an area of growth, Amon suggested, building on existing Snapdragon PC chip development deals with Microsoft and Lenovo for thin and light laptops, as will be 5G cloud/edge computing. He also noted that the company has placed two major future-focused bets: vehicular autonomy, which he’s not discussing at this point in detail, and bringing 5G and AI technologies to the network’s edge. On the latter point, Amon said that Qualcomm’s AI network cards are delivering dramatically better performance than incumbent solutions, including chips that deliver twice the performance of rivals — between 10 times the power of FPGA chips and 100 times the AI performance of general-purpose CPUs.