The company didn’t reveal a valuation.

Founded in 2011, Vayyar started with 3D radar imaging technology targeted at the medical industry as an alternative to mammograms in the detection of breast cancer. Since the company’s global launch in 2015, it has expanded to apply its technology to other sectors, including retail, robotics, automotive, and the smart home, with the ability to see through objects, map environments, and track movements. Today, Vayyar refers to its technology as “4D” radar imaging, with the additional dimension reflecting its ability to capture motion.

Vayyar’s sensors can be used in all manner of scenarios: to track and count people in a room, detect if someone is lying unconscious on a factory floor, find pipes hidden inside walls, track consumers as they traverse supermarkets, help carmakers map the internal and external environment, and even enhance smart home applications. 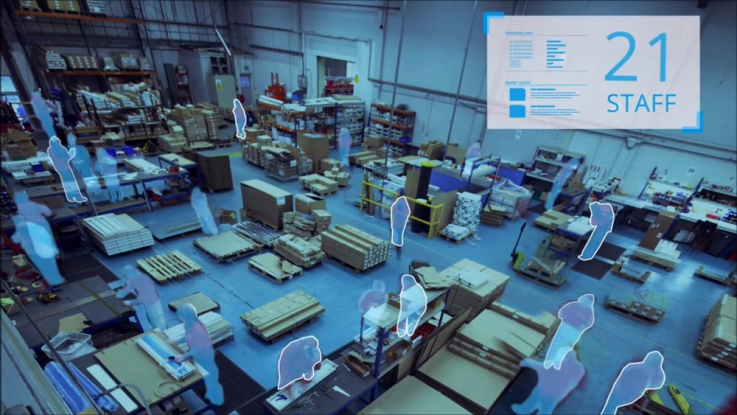 Above: Vayyar’s sensors used in a “smart office”

Although Vayyar mostly works through industrial partnerships, it has its own line of consumer products that it sells under the Walabot brand, including a fall detection device designed to help family members or caregivers keep tabs on elderly people.

Vayyar’s sensors offer a number of advantages over comparable technologies on the market. For example, the technology is more concerned with shape and form than identifying people, making privacy protection among its core selling points. It can also work in any lighting conditions and see through solid objects, meaning it isn’t hampered by poor weather conditions or line-of-sight restrictions.

Nabbing Koch as a strategic investor is also a major deal, given that Koch and its various subsidiaries operate across sectors spanning energy, manufacturing, pulp and paper, finance, and more.

“Advancements in imaging sensors are vital as technology continues to disrupt all aspects of society,” said KDT president Chase Koch. “We see incredible potential in combining Vayyar’s innovative technology and principled leadership team with Koch’s global reach and capabilities to create breakthroughs in a wide range of industries.”

Vayyar had previously raised $79 million, and with another $109 million in the bank it plans to grow its global footprint and expand its existing offerings in key industries.

“With this new funding round, we will continue to create the next generation of sensing technology that is miniature, affordable, and versatile enough to impact everyone’s lives,” added Vayyar cofounder and CEO Raviv Melamed. “Koch’s entrepreneurial culture and market leadership in multiple industries can help accelerate Vayyar’s growth much faster than we did before.”