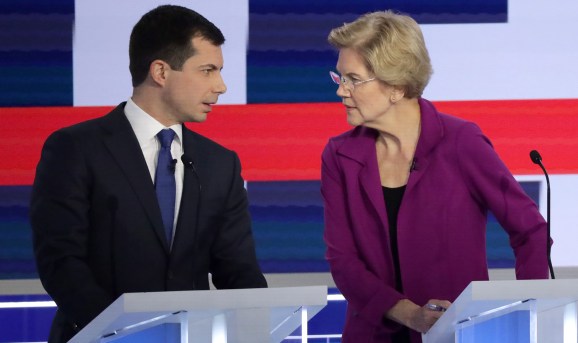 Buttigieg said the U.S. is spending a fraction of the attention and resources on AI research that China is. “If we fall behind on artificial intelligence, the most expensive ships that the United States is building just turned into bigger targets,” he said.

Alongside climate change, loose nuclear material, military drones, and non-state actors, Andrew Yang named AI among five essential threats the U.S. faces in the 21st century. Several presidential candidates labeled China the biggest external threat to the United States in a Democratic debate held in June. “[W]e’re in the process of potentially losing the AI arms race to China right now because they have more access to more data than we do and their government is putting billions of dollars to work subsidizing the development of AI in a way that we are not,” Yang said.

And Yang repeated his assertion that the U.S. government is 24 years behind on tech, something he previously discussed in an interview with VentureBeat. He also suggested the creation of a global organization for data as part of a national security plan to build international consensus against China and Russia. Last week, Yang released a data and tech regulation plan and continued his assertion that personal data be treated as a property right.

“I want to propose a new world data organization, like a WTO for data, because right now, unfortunately, we’re living in a world where data is the new oil and we don’t have our arms around it,” he said.

Both Buttigieg and Yang have repeatedly returned to the subjects of automation, AI, and the future of work on the presidential debate stage this year. In the June debate, Buttigieg criticized Trump for fighting a trade war when the focus should instead be on ensuring China does not surpass the U.S. in AI. In September, Yang began the debate by pledging to give $1,000 per month to 100 Americans to test-drive his universal basic income plan for one year, money Yang suggests the government dole out in part to address the impact of automation.

The Trump administration has been criticized by Democratic candidates for its lack of AI investment or national strategy. Their comments echo a draft report by the National Security Commission on AI (NSCAI) delivered to Congress earlier this month. The report says the U.S. has a robust startup and research ecosystem, but it also mentions China more than 50 times, says China is outpacing the U.S. in AI spending, highlights underspending by the Department of Defense, and outlines a potential future of algorithmic warfare.

Following the report’s release, former Google CEO Eric Schmidt, who acts as chair of the group, called for more investment in AI. Former Google Cloud chief scientist and Stanford professor Dr. Fei-Fei Li also called on the federal government to ramp up AI investment with a suggested $120 billion commitment over the next 10 years. Failure to do so could lead to economic or military consequences, she said.

Senate minority leader Chuck Schumer (D-NY) earlier this month said he wants the U.S. government to create a new agency to invest $100 billion in AI research over the next five years.

This summer, the White House revised the U.S. AI research and development plan for federal agencies by adding the need to collaborate with business and international allies. An update was issued Wednesday.

Other tech-related references during the debate came from Sen. Cory Booker (D-NJ). He talked about the lack of venture capital investment in startups with black and brown founders and the need for startup investment outside of hubs like Silicon Valley, New York, and Boston.