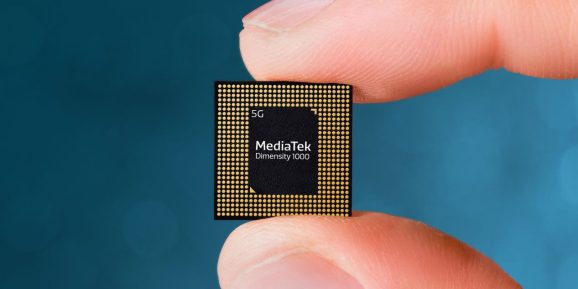 MediaTek's Dimensity 1000 is its first 5G SoC in a planned family of 5G chips.

It’s no surprise that MediaTek has been working on a 5G system-on-chip (SoC) for some time, with plans to offer a Qualcomm Snapdragon 855 alternative for higher-end 5G devices. Today, MediaTek officially named the chip Dimensity 1000 and provided specs for what it says will be the first in a family of 5G SoCs.

The upshot is that Dimensity 1000 will deliver “extreme energy efficiency” because all of its components are inside one chip, enabling phone makers to preserve internal space for bigger batteries or larger camera sensors. Moreover, the chip’s various cores are all high performers, with a new AI chip standing out most from the pack.

On the processing side, the 7-nanometer, octa-core CPU will include four ARM Cortex-A77 cores with up to 2.6GHz speeds, plus four Cortex-A55 cores running at up to 2GHz. It will be coupled with an ARM Mali-G77 GPU, supporting 120Hz FullHD+ screens, or 90Hz 2K+ displays, as well as AV1 streaming media format support, and either one 80MP/24fps camera or lower resolution multi-camera options.

Dimensity 1000 will also include a new AI processing unit called APU 3.0, which the company says will reach an ETH Zurich AI Benchmark score of 55,828, more than doubling the performance of its prior-generation APU. The chip will aid with camera focus, exposure, white balance, noise reduction, HDR, and face detection, plus “the world’s first multi-frame video HDR capability.”

In terms of wireless capabilities, the company claims that Dimensity 1000 will deliver the fastest throughput of a sub-6GHz SoC, with 4.7Gbps downlink and 2.5Gbps uplink speeds, while also being the first to support dual 5G SIM technology. The chip promises to aggregate two 5G connections to achieve its download speeds, as well as offering 2G to 5G network compatibility.

That said, it won’t include millimeter wave support, which means it’s intended solely for “global sub-6GHz 5G networks that are launching in Asia, North America, and Europe.” But it will be capable of handling 1Gbps Wi-Fi 6 downloads and uploads, as well as rapidly toggling between cellular and Wi-Fi to deliver the best, lowest-latency connection for gaming. MediaTek also says the SoC will support “Bluetooth 5.1+,” suggesting the potential of a firmware upgrade beyond the current standard.

Dimensity 1000 will be found in unspecified devices “later in 2019 and in early 2020.” The company says that future Dimensity family chips will be intended for “premium and flagship smartphones.”