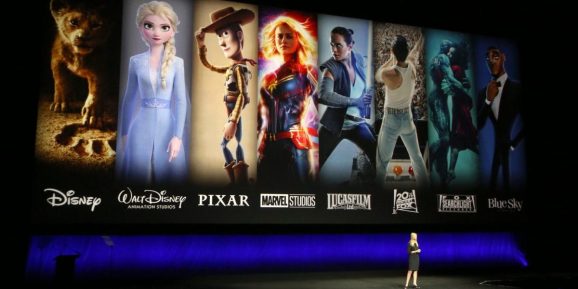 This week Disney’s stock popped above $152 per share, reaching an all-time high and driving total valuation for the House of the Mouse beyond a quarter trillion dollars. The market has warmed to Disney in recent months, buoyed by strong box office numbers from hit franchises like Marvel and Pixar and a strong back half book-ended by Frozen 2, which opened this week to record numbers. And there are high expectations for the final installment of the Star Wars saga, which opens next month.

While this week’s Frozen numbers no doubt sent a chill down the spine of every other studio, Disney has put up strong receipts all year that have not managed to move the stock to the highs seen this week. While the big screen has played well for Disney, it is recent news from the smaller screens – millions of them — that has captured the market’s attention.

Earlier this month Disney’s much anticipated streaming service debuted in the United States to what were by all accounts stunning initial results. Disney+ racked up more than 10 million subscriptions in its initial week, showcasing the power of the Disney content universe. New numbers from Apptopia this week confirm the initial launch numbers were just the beginning of the platform’s growth; the Disney+ app saw 15 million downloads in the past two weeks, averaging about a million new users per day. Keep in mind: These downloads are in addition to the millions of subscribers that are watching via their Apple TV and Roku devices.

These impressive numbers have led some analysts to predict Disney will reach its goal of 60 to 90 million subscribers two years ahead of schedule. To be sure, there are fair questions to be answered about churn as many of the new subscriptions likely flow from the free one-year trial deal Disney struck with Verizon, and many more took advantage of the free 7-day trial period Disney extended as part of its mega-marketing blitz.

What is undeniable, however, is the unrivaled fan base Disney+ has built into its service that will make its beloved content library and its new original programs aligned with Star Wars, Marvel, and Pixar a must-have service for the 30+ million US households with children. And, while impressive on its own, with more 500 movies and 7,000 episodes of television, the real Disney+ magic lies in the network effects it can draw upon to deepen penetration into the broader streaming market.

With so much initial attention focused on the Disney+ launch, it’s understandable that the Disney+ / Hulu / ESPN bundle that was also launched this month received less attention. The Apptopia report also provides a closer look at the longer-term streaming horse race shaping up and shows the positive add-on effects Disney+ is having for ESPN and Hulu.  According to the data, both have experienced 50% increases in app downloads since the launch of the bundle service.

The bundled implications are significant as they will accelerate market adoption of streaming as a whole and hasten the already fast moving audience migration from traditional television to streaming platforms that will benefit many players. Roku, for example, has also benefited from the Disney magic, seeing downloads of its app increase by more than 25% in the past two weeks as millions of new subscribers (and likely first-time streamers) clamor for the Disney content.

While Disney+ will have no ads (as of now), it’s clear Disney also sees an opportunity with its bundling strategy with Hulu to tap into the $70 billion US television advertising market that is just beginning to move to streaming platforms. The Disney / ESPN / Hulu bundle is only available with the ad-supported Hulu subscription.  The brilliance of Disney’s plan is it gets to have its cake and eat it too, as it plays to both the segment of the population that wants no ads (via Disney+) and those that want to tip their toe into the streaming waters but are not ready to shell out large sums for all ad-free content.

The bundle strategy also serves to accelerate adoption of Hulu’s live television platform for millions of new subscribers. Last week Hulu’s live TV offering surpassed Dish’s Sling TV to become the biggest streaming pay-TV service in the US. The eventual goal is likely a world where all of Disney’s content, from Disney+ to ESPN to ABC, lives within the Hulu ecosystem, thus addressing the number one pain point consumers have today with the multitude of streaming services: fragmentation.

The net takeaway for those handicapping the streaming wars is that consumers want more than one streaming content channel and are willing to pay for it. A recent survey found consumers are willing to shell out $100 per month for all of their streaming subscriptions. What they don’t want is a complicated, fragmented and duplicative ecosystem that is as impossible to navigate as their current 400 channel cable package.

Disney’s strategy to leverage its content advantage to bolster both its platform and advertising play with Hulu and ESPN offers a hulk-sized market advantage that will be hard for many competitors to replicate.