Podcasting’s surging popularity can be attributed to a number of factors, including support from the two big mobile platform owners — Google and Apple — which are investing in the medium through apps and content. And the mighty Spotify has shelled out some $400 million in acquisitions this year alone as part of its podcasting push. All of this activity is creating a landscape fertile for ad-based monetization. A report from the Interactive Advertising Bureau (IAB) and PwC in June estimated that the podcasting industry generated $479.1 million in advertising revenue last year, up 53% on the previous year, and predicts that this number will rise to more than $1 billion by 2021.

A cornerstone of podcast advertising since its inception has been the humble host-read ad, whereby the show’s main presenter reads a script touting the advantage of a specific razor or health supplement. However, matching brands with the most suitable podcaster isn’t always easy — especially given the sheer number of podcasts out there (700,000, and counting) — which is where Podcorn comes in.

Podcorn, which officially launches today, is a marketplace that promises to deliver what it calls the “next generation of native podcast advertising,” using machine learning to match podcasters with the most relevant brands. Its algorithms analyze brands’ campaign data, such as budget, types of ad creatives, and the kinds of podcasters they want to work with.

Podcorn is the brainchild of Agnes Kozera and David Kierzkowski, a duo perhaps best known for having sold their previous startup, FameBit, to Google back in 2016. FameBit is similar to Podcorn in many ways, insofar as it’s a marketplace that connects YouTube creators with brands — and the service is still available today under the FameBit by YouTube branding.

Kozera and Kierzkowski led the FameBit product team at Google for a little over a year before leaving in early 2018 and starting work on Podcorn a year later. They also managed to raise $2.2 million in seed funding from Global Founders Capital, Bessemer, 500 Startups, and Alumni Ventures Group, among others, a round that was announced back in August alongside Podcorn’s original proof of concept.

The Podcorn platform uses what it calls a “sponsorship graph” to match campaigns with podcasters, though both sides have to negotiate the project specifics before commencing. To kick things off, Podcorn analyzes the RSS feed metadata for each podcast, including the show description notes, titles, niche, past guests, and so on, and it then deploys a weighting system to match each podcast with the most suitable brand. Podcorn learns from subsequent interactions on its platform, such as how podcasters are pricing themselves, what kinds of native ad formats work best (e.g. interviews, prerolls, etc.), and specific feedback from the advertiser.

“What is exciting to us is that we are building sponsorship profiles based on all that information, which will result in very robust filtration and matching systems,” Kozera told VentureBeat. “So over time, if a brand gets 100 proposals, we can provide a very intelligent ranking filter based on the relevancy of what they need — if an interview is their core ask, we can rank by who is the best suited for them from all the proposals submitted.” 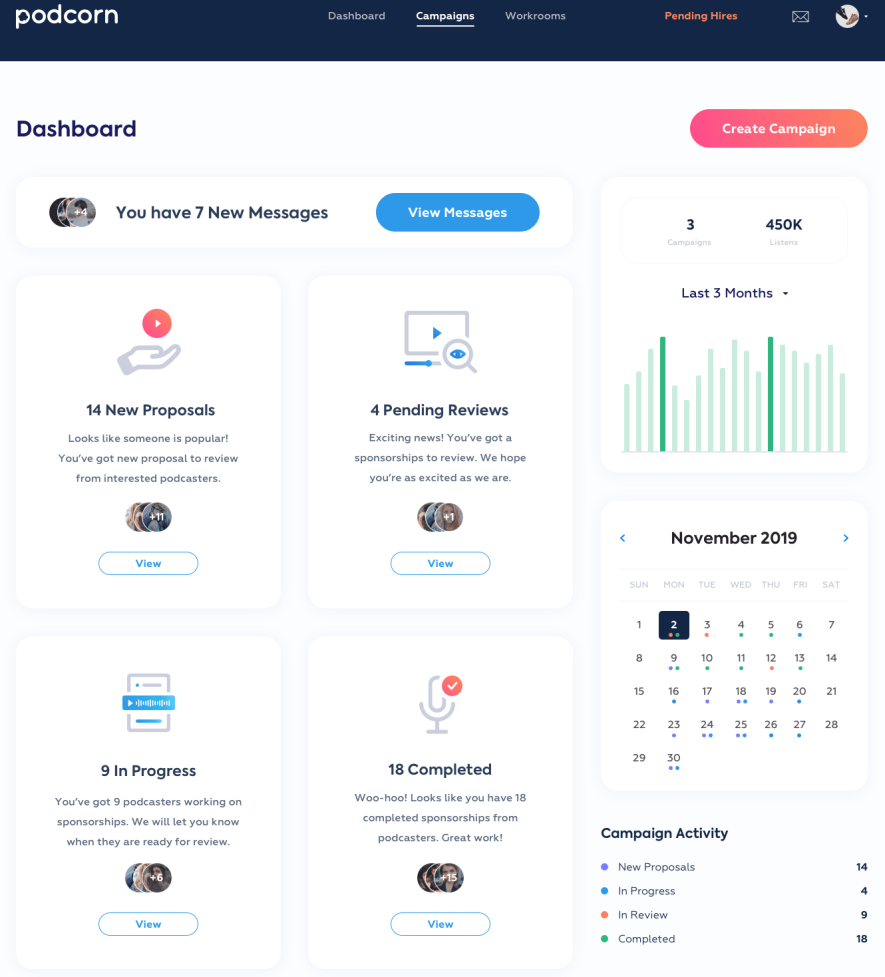 Once a brand has been matched with a podcaster, Podcorn automatically sets up a “virtual workroom” for the duration of the project, with the funds stored in escrow until the project is finished to both parties’ satisfaction. Podcorn takes a 10% fee from each party. 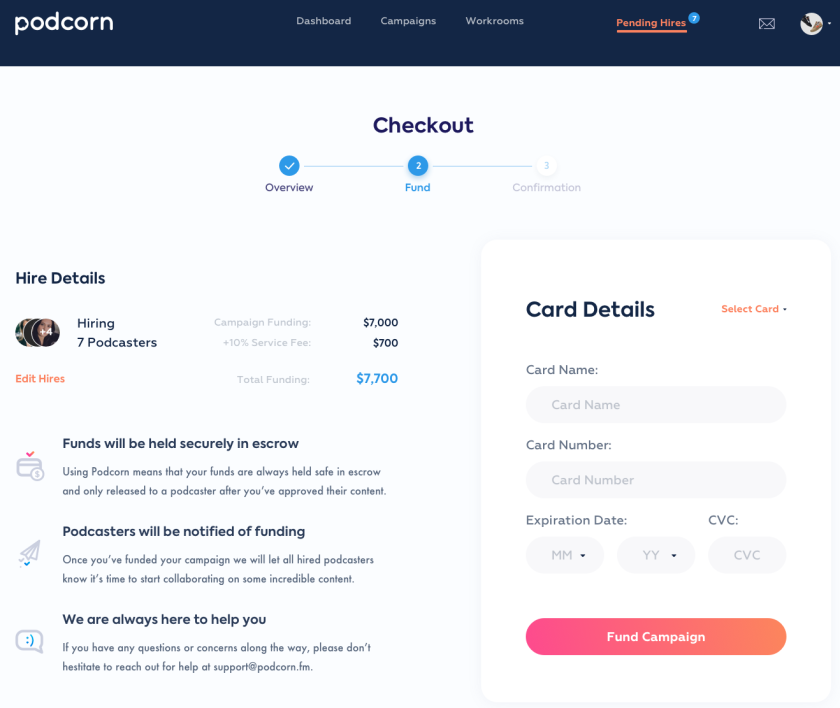 Above: Podcorn: On checkout, funds are kept in escrow

One of Podcorn’s selling points is that it can help podcasters who aren’t earning much through advertising by pairing them with the right brand for their audience niche. This helps level the playing field, as smaller podcasters may be able to command higher fees because of their focus on a target market.

For example, a general technology podcast with millions of listeners may seem attractive to a mobile cybersecurity brand due to their potential reach. But in reality, a podcast with 80,000 listeners could be better if it focuses purely on Android vulnerabilities, especially if the podcast host is a renowned expert on the subject.

“Through our work with YouTube creators, we learned that size of creators doesn’t equate to conversions for brands — it’s all about working with the right creators at scale,” Kozera said. “We also saw how important it is to lean on the creator’s creativity and relationship with their audiences to succeed.”

Podcorn’s algorithms are there to ensure a good fit.

“Every podcaster has a unique sponsorship graph,” Kierzkowski added. “We built the infrastructure to connect the dots to gain more context about each podcaster’s identity, their content, and what our brands are looking for. Our goal is to encode relationships and surface the most relevant matches to truly scale native branded content, drive higher ROI for brands, and increase the rate at which podcasters monetize their content.”

Podcorn soft-launched two weeks ago and has been preboarding users and allowing them to create profiles. Today, podcasters and brands will be matched for the first time.

“From our conversations with our brand partners and podcasters, we can see that we have built something that the industry really needs,” Kozera said.

While there are clear synergies between FameBit and Podcorn, podcasting arguably presents a much greater opportunity because it’s a far more expansive and “easy to reach” medium than video, which relies on the viewer being actively engaged with a screen. One of the reasons podcasting is as big as it is today is because it can be consumed pretty much anywhere — while traveling to work or on the job, on road trips, in bed at night, or when doing chores at home.

“The excitement we’re seeing is much bigger than even the early days of video influencers,” Kozera continued. “Brands now understand the value of partnering with relevant personalities, and with podcasts the vertical scope and content diversity [is] much wider. [The medium] supports longer, more intimate ad formats for more authentic integrations, and brands don’t have to wait for audiences to be glued to a screen in order to reach them.”

As noted, native advertising will be a big focus for Podcorn, and the company will be pushing more extensive campaigns, from cohosted interviews with senior figures from a brand to longer-form programming that blends into the show. The latter may include topic-driven content, panel shows, vodcasts, product unboxings and explainers, sketches, and more. “With podcasting, we’re taking a fresh approach to branded content and focusing more on conversational storytelling,” Kierzkowski said.

This is similar to the way YouTube evolved to embrace native advertising, with countless brands now paying influencers to promote their products in videos. In effect, the advertisement is the content. And Kozera and Kierzkowski’s time at FameBit means they bring a lot of knowledge and experience to the table.

“Right now in the podcasting industry, just like in the early days of YouTube influencers, the majority of podcasters aren’t able to monetize sufficiently,” Kozera continued. “And through our experience with YouTube creators, we saw that traditional ad formats like preroll ads weren’t enough to sustain the creator ecosystem — they mostly benefited the really large creators. If you talk to a lot of the smaller and mid-size YouTubers, a lot of them make most of their money through native sponsorships because it allows for a more flexible pricing model that is not just based on impressions, but rather expertise, topic relevance, the type of content they are creating, length of integration, and so on.”

This isn’t to say that Podcorn won’t be encouraging host-read sponsorships like those we have all become accustomed to, but the company is clear that it wants to modernize the approach and foster an organic, tight-knit alignment between the podcast and the brand.

“If the company focuses on nutrition, we try to match it to podcasters that are experts in that field and who have listeners that come to learn about nutrition-related content — [this is] versus traditional randomly inserted host-read ads,” Kozera said. “We also encourage brands to provide guidelines and talking points, versus scripted ads to read, and to give podcasters flexibility to convey the message in their own voice.”

Podcorn is officially open for business from today.