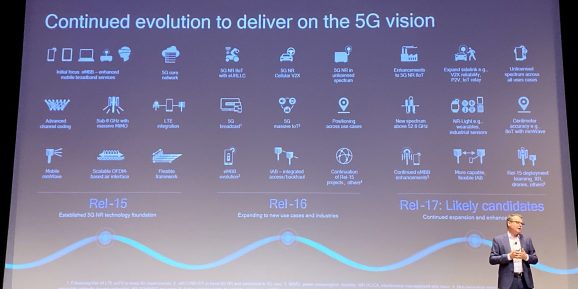 As the chief organization responsible for 5G and its 4G/3G predecessors, the 3rd Generation Partnership Project (3GPP) is responsible for global standardization of cellular technologies, turning multiple companies’ innovations into features that work across different phones and networks. This week, the 3GPP approved a collection of 24 new projects designed to advance the 5G standard in the second half of 2021, with official work scheduled to commence early next year. If they come to fruition, they’ll collectively expand 5G well beyond its current capabilities.

If you haven’t been following the 3GPP’s work, here’s a quick summary: Release 15 was formally approved in mid-2018, setting the stage for early 5G that used 4G networks as a backbone. Release 16 — “5G Phase 2” — is currently underway, with a freeze on changes scheduled for March 2020 and standard completion slated for June. Due to industry demands, the organization is pursuing a faster timetable for Release 17, with plans to wrap up work before the end of 2021, but the date could change.

While Release 16 focuses on creating a complete end-to-end 5G system and setting the stage for cellular vehicle-to-everything (C-V2X) communications, Release 17 will address a number of third-phase expansions of the standard. Some are fairly obvious, such as improvements to boost speeds and power efficiency, including enhanced dynamic spectrum sharing (DSS), dual 5G and 4G-5G simultaneous connectivity, millimeter wave beamforming, and delivery of service from multiple transmission points. The standard will also increase location accuracy down to centimeter level and address multi-SIM support for the first time.

One of Release 17’s most interesting projects is NR-Light, a version of 5G that will work on next-generation wearable and internet of things (IoT) devices that need access to high cellular bandwidth without the power drain of full 5G implementations. NR-Light will be able to deliver 100Mbps downloads and 50Mbps uploads using just 10-20MHz of bandwidth — small quantities commonly used in low band 5G networks — which will be enough for video cameras, many wearables, and industrial IoT sensors. The 3GPP is also working on a parallel project, 5G Massive IoT, to enable existing IoT sensor platforms to support satellite transmissions.

Release 17 is also expected to broaden the use of cellular spectrum in some interesting ways. Until now, most millimeter wave 5G deployments have been in the 24GHz to 39GHz range, but the new release will increase supported 5G spectrum into the 60GHz band — frequencies that have previously been used, lightly, by 802.11ad and 802.11ay Wi-Fi devices such as virtual reality headsets. Supporting 5G using the same frequencies could enable future 60GHZ Wi-Fi XR headsets to easily transition between streaming local and network content.

The new release is also expected to add support for public safety multicasting and venue-casting, enabling large numbers of users in specific geographies to simultaneously receive warnings or other notifications. Planners are also working on extending C-V2X to enable “sidelink” — direct vehicle-to-vehicle/device communications — to pedestrians, bicyclists, and users of other small vehicles, both for direct-from-vehicle and relayed communications.

Additional details on Release 17 can be found on 3GPP’s site, as well as the sites of participating companies such as Qualcomm. 3GPP currently expects to complete major physical aspects of its work in the second quarter of 2021 and finalize Release 17 by September 2021.