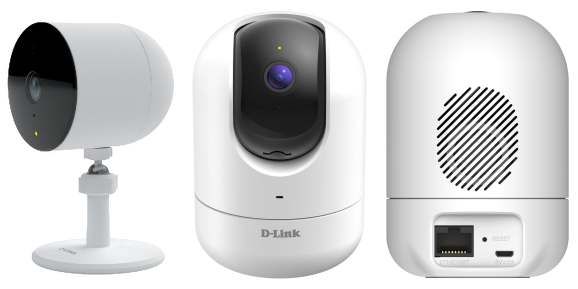 AI advances are going to underpin many of this year’s major camera developments, as increasingly powerful local processing combines with machine learning to enable on-device recognition of people and objects. Today, D-Link is introducing two new home security cameras that are leveraging edge-based AI to detect both people and breaking glass, enabling users to get quick notifications if either is detected.

While D-Link isn’t the first company to use AI to detect breaking glass — Amazon introduced a similar feature in Alexa Guard, and ID R&D offers sonic-based technology for non-Amazon devices — having a device that can monitor for this common sign of home intrusion without help from cloud servers could be beneficial. Getting a notification immediately could give police an extra minute or more to foil a burglary.

D-Link says that its goal is to eliminate the expense, data demands, and speed penalties of sending video over the internet to be processed, instead handling the analysis directly on the devices, which share most of their features. Between new AI software and hardware, the company says the cameras’ alerts will be both faster and more accurate than before.

While users will have the option to store videos via free and paid cloud services, the cameras will now have built-in microSD capacity of 256GB, as well as the option to store or stream using ONVIF Profile S and personal NAS devices. They’ll also benefit from wired Ethernet abilities for increased connection stability.

The company’s $100 indoor model, DCS-8302LH, includes a motorized panning feature that can provide a 360-degree view of any room and automatically track a subject’s motion. It’s scheduled to hit the market in the second quarter of this year. A $120 outdoor model, DCS-8526LH, is a stationary design with a spotlight and siren that can be used to deter intruders; it will be available in the third quarter of 2020.