When the Bluetooth SIG announced the power-efficient Bluetooth LE/Bluetooth Smart standard nearly a decade ago, users expected that long-lasting wireless headphones and speakers would quickly follow — but that didn’t happen, as LE’s dramatic power reductions were actually designed for lower-bandwidth accessories such as intermittently used digital scales and in-home sensors. Today, the Bluetooth group announced LE Audio, which will finally leverage the standard’s energy efficiency improvements to improve the performance of wireless listening accessories.

It’s worth mentioning up front that LE Audio will coexist with “Classic Audio,” the regular and enhanced data rate Bluetooth radio mode that is currently used in billions of devices worldwide. Developers will be able to choose between modes as appropriate to support their devices, including ones that rely upon the new standard to achieve smaller form factors than before.

Perhaps the most significant component of LE Audio is LC3, a new low-complexity communication codec that promises to outperform classic Bluetooth audio at lower bitrates. Whereas the older sub-band codec (SBC) compressed a 1.5MBps, 48KHz stream to 345Kbps, the Bluetooth SIG says, LC3 can compress the same 1.5Mbps data into perceptibly better-sounding audio at only 192Kbps.

“Extensive listening tests have shown that LC3 will provide improvements in audio quality over the SBC codec included with Classic Audio, even at a 50% lower bit rate,” said Fraunhofer communications audio head Manfred Lutzky. As a result, the same-sized accessory battery will be able to last longer, or a reduced-size battery will work at today’s longevity levels, assuming a developer supports the new standard. This is expected to improve the viability of Bluetooth hearing aids. 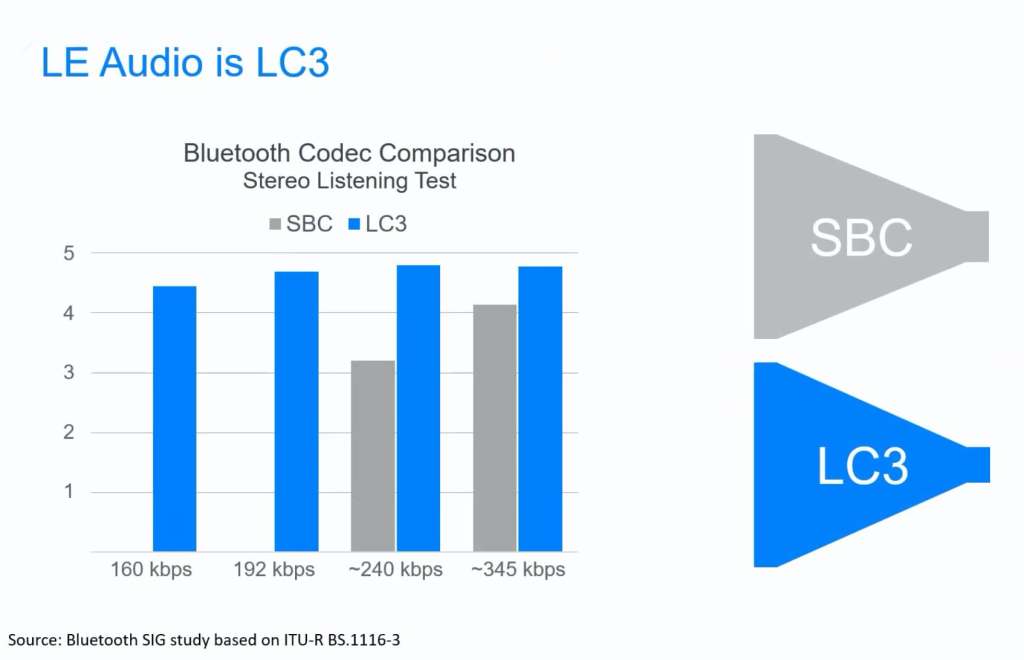 The Bluetooth SIG is also catching up with the independent engineering efforts of some of its member companies by adding support for multi-stream audio, enabling the synchronized broadcast of multiple independent audio streams from one source device to one or more receivers, including separate left and right earbuds. Multi-stream audio, it says, will improve the quality of stereo imaging, which depends on ultra low latency to sound correct but may have previously suffered from lag when separate left and right earbuds or speakers had to communicate with each other.

On a related but separate note, a feature called Broadcast Audio will allow a single source device to share its audio streams to an unlimited number of receivers. This will enable Bluetooth-based audio sharing that can be “closed” and kept personal with a passcode — one smartphone to several friends — or “open” and location-based, with a theater or gym sending audio to multiple listeners. A new pairing experience will be included to support Broadcast Audio.

“Location-based Audio Sharing holds the potential to change the way we experience the world around us,” Bluetooth SIG director Peter Liu said. “People will be able to select the audio being broadcast by silent TVs in public venues, and places like theaters and lecture halls will be able to share audio to assist visitors with hearing loss as well as provide audio in multiple languages.”

As is always the case with new Bluetooth standards, these changes won’t immediately become available to existing device users, and based on past history, it’s unlikely that existing Bluetooth 5 or 5.1 accessories will receive firmware updates — but it’s possible, the SIG says. The organization isn’t saying what the minimum core Bluetooth standard number will be for LE Audio, so it’s not yet clear whether users will need to look for Bluetooth 5.2, 6.0, or just “LE Audio” badged devices.

LE Audio’s rollout process will begin with the release of updated specifications throughout the first half of this year and continue with shipment of new LE Audio-capable products thereafter. Since nearly 4 billion Bluetooth products ship each year, roughly one-quarter of which are audio accessories, it’s likely that the new standard will see at least some support by the end of 2020; venues supporting the Broadcast Audio feature are expected to debut over the next several years.