I’m 100% sure you have a bunch of great ideas. Unfortunately, if they’re stuck in your head, they’re effectively worthless.

An idea in your head is like gold still in the ground. If it’s stuck in the walls of the mine, its only value is potential value. You have to dig it up, get it out, bring it to the surface. You get it above ground, and even at that point, it’s only just a commodity. Because it’s what you do with it next that determines its true value. Shaped into a necklace, gilded on a statue, drawn into wire, its value is how you use it.

So why do we do this to ourselves? We have these nuggets in our brains that we hold on to and protect because maybe someday they’ll be fully formed and ready to share with the world? Good luck.

Or maybe because truly revolutionary ideas are hard to explain, even to yourself perhaps. Can you even capture it in words? Is it a picture in your head that you’re struggling to describe? To communicate to others? Is it fear? Fear that you’ll be judged by the rough ore of an idea you pull out because it’s not one of these shiny, polished ideas that others claim came to them complete?

I’ve thought about this tremendously over the last ten years. What is this friction that keeps good ideas just sitting in our brains, left to die? The more I looked at it, and reflected on my own experiences, the more important it became to me. I realized that, with no exaggeration, the most powerful ideas to change our world are likely sitting in our collective minds right now — unexpressed, unexplored, and unappreciated.

How much more could we achieve collectively if we could erase this friction? If we could more easily share those ideas, they would add to the “compound ideation” that drives us forward so much more than any individual’s imagination.

So I left Google and set out to reduce the difficulty of expressing and improving ideas. Teaming up with two partners from Samsung and Naver, we started ProtoPie. ProtoPie is our vision of a prototyping tool to help individuals and companies understand, communicate and realize their best ideas. It’s funny. We built a robust and powerful prototyping tool, even though we don’t ultimately care about prototypes. We care about realizing ideas, and we see prototyping as an integral part of that.

ProtoPie was particularly challenging to explain early on (like many good ideas seem to be). When we first pitched the alpha version of the software to investors and the tech community, they assumed ProtoPie was a visualization tool — something to translate UX design concepts into more tangible visual aids. They saw it as a wireframing app or a piece of animation software. And while it could, and can, certainly do those things, we always saw it as something more.

We believed that if it were easier to get those ideas out and into a sharable format, then ProtoPie would be a very effective communication tool. So instead of exploring just how the software could be better for the UX design process in showing animations and interactions, we asked deeper questions about linguistics and cognition.

We wondered if language itself was a barrier to sharing our ideas as we imagine them. We thought “are our words failing to capture our ideas?” So we developed a new language. One that’s universal. With ProtoPie, you create prototypes not with a manufactured coding language, but with a simple, intuitive workflow that feels more human than machine. No matter what language or languages you speak, your prototypes become a universally understandable window into your head. It allows those ideas to be more easily expressed, explored, improved upon, appreciated, and realized.

And today, the tech community doesn’t need any convincing. Thousands of the world’s top designers and thinkers, working on cutting-edge teams at Microsoft, Google, OnePlus, HBO, BMW, and so many more, are using our software not just for interaction design and building prototypes, but to communicate their ideas and bring their best ideas to life.

Eduardo Sonnino, a senior designer at Microsoft, told us that ProtoPie has changed the way his team thinks and works. He said that just a few years ago, they would put together 100-slide presentations to try to explain an idea. Now, he told us, they just hand over a single prototype built in ProtoPie. That means they spend more time evaluating and improving the ideas instead of wasting time just trying to explain them.

Many of the first major companies to embrace ProtoPie have been tech firms in Silicon Valley. They were already familiar with UX design, and it was easy to demonstrate the value of ProtoPie to them. But now, we’re seeing the next wave of adoption, and it looks completely different.

In the last couple of years, companies big and small all over the world have realized that user experience design isn’t a tech term. It’s more of a mindset of allowing your ideas to be changed and improved by engaging the audience to touch them, respond to them, and co-create them. And the community is showing us just what’s possible with ProtoPie.

We’re seeing new applications in automotive, in manufacturing, in health, and more. Industries that are so diverse in their needs, but are all finding common ground in understanding the value of collaborative ideation. ProtoPie is helping them express their ideas faster and more effectively. We believe that there’s truly no limit to the positive impact that can, and will, create globally.

ProtoPie itself is still very much a prototype. We are working every day to improve the software. Our focus today, as it has always been, is on making, expressing, and improving ideas more fluidly. Recently, we’ve launched a new suite of tools in ProtoPie that make it the only prototyping tool suitable for enterprise-level collaborative prototyping. We have our ideas about how impactful the update is going to be. But if we’ve learned anything since starting this journey, it’s that the community will always take your ideas further than you could have imagined.

Is our job done? No, definitely not. There are still some ideas trapped in my own mind I’m trying to express. But what I’m certain of is that the tools we’re developing aren’t just going to unlock my own ideas, but to help you unlock and express yours as well. Like I said, I know you have a bunch of world-changing ideas stuck in your head. Now that you can express them, let’s see what they become. 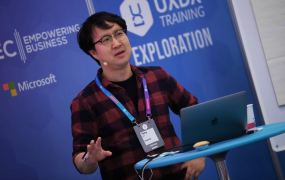 Tony Kim is co-founder and CEO of ProtoPie.