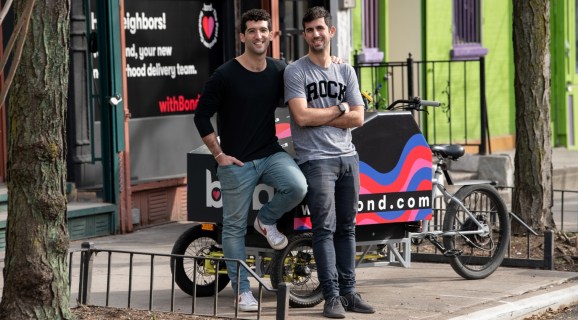 Bond, a New York-based startup that offers ecommerce companies delivery and distribution center services, has raised $15 million in a round of funding from Lightspeed Venture Partners, MizMaa Ventures, and TLV Partners.

Founded in 2019, Bond has developed the technology and infrastructure to let direct-to-consumer (D2C) brands quickly deliver their products and more easily accept returns. This helps smaller companies keep apace with the likes of Amazon, as it gives them access to an on-demand delivery network and Bond’s “nano distribution centers” (NDCs) in neighborhoods near where the products are to be delivered.

On the software side, Bond is an application programming interface (API) that companies integrate into their own ecommerce apps and websites to offer deliveries. Bond also enables integrations with popular ecommerce platforms such as Shopify, Shippo, Magento, and WooCommerce.

Through these various integrations, retailers can give their customers access to “last-mile” delivery services. Available slots cover three-hour same-day delivery windows if the order is placed before 1p.m., or slots for the next day if the order comes in later. Deliveries can be tracked in real time, and customers can communicate with the courier through the app, as well as scheduling someone to collect an item if they want to send it back. 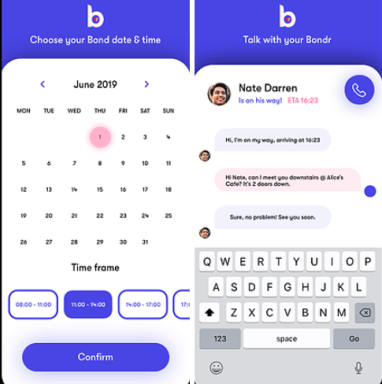 Above: The name’s Bond…

Underpinning all this are the physical distribution centers Bond has opened in strategic locations in neighborhoods across New York City. The company plans to start targeting other U.S. markets in the coming years.

For now, Bond manages delivery and storage for more than 30 brands in the Big Apple from six distribution centers in Manhattan and Brooklyn, and it has also partnered with third-party distribution centers to offer deliveries to some locales in Queens and New Jersey. Bond said that by March it plans to open another six NDCs in the New York metro area, with dozens more to follow as it targets new neighborhoods and cities throughout 2020 and beyond. 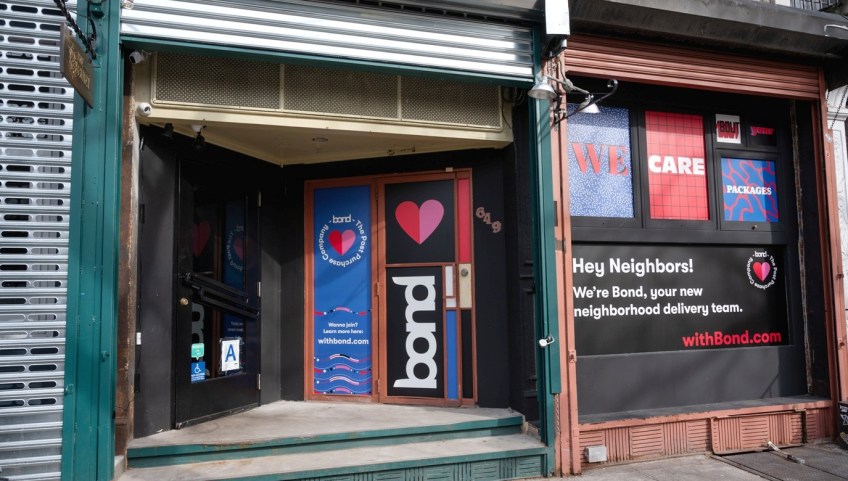 Above: A Bond nano distribution center (NDC) in NYC

This represents part of a broader trend in which retailers, including grocery giants like Walmart and Safeway owner Albertsons, are building smaller urban fulfillment centers near their existing stores to cater to the growing number of orders placed online. Emerging startups such as Israel’s Fabric, which recently secured $110 million in funding, and Canada’s Attabotics are also building businesses around “microfulfillment centers” designed to expedite shipping in space-limited city centers.

Bond said it currently manages 15,000 deliveries each month and covers everything from mattresses to groceries. It charges for each service required, including delivery, storage, and other “post-purchase experiences,” such as fulfillment (picking and packing), according to specific brand guidelines.

Pricing varies, but the company said deliveries in Manhattan and Brooklyn should cost between $8 and $12 per item, depending on the weight and number of delivery windows. Storage prices depend on the number of pallets and frequency of use. 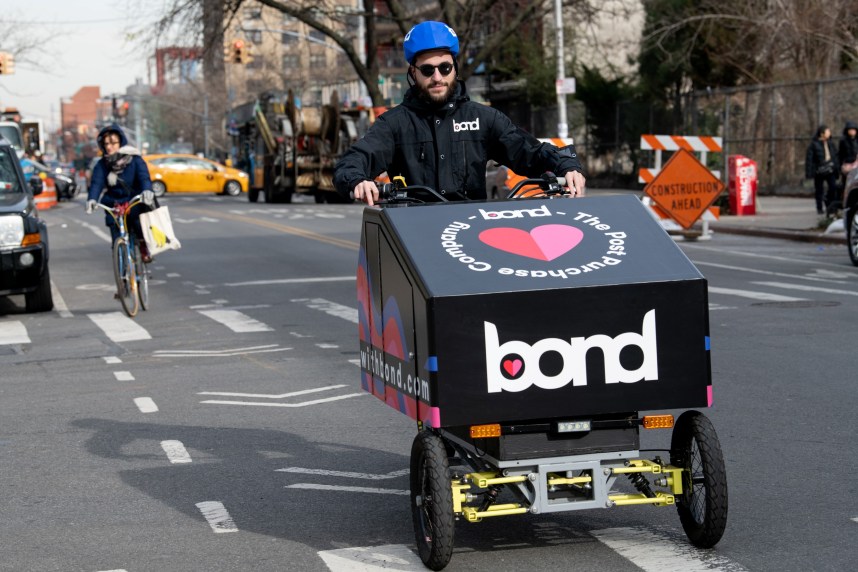 Above: A Bond delivery vehicle

Bond was born out of an Israeli online grocery startup called Shookit, which was also backed by Lightspeed Venture Partners and has developed much of the technology behind Bond over the past three years. Shookit’s cofounders elected to spin out the technology as its own New York-based company and offer it to other online retailers — a new management team is now leading Shookit out of Tel Aviv.

At its core, Bond promises to help online retailers ensure better customer service after a purchase has been made. Companies typically have limited control over the customer experience once a product has been dispatched, which is something that Bond hopes to change.

“Last-mile delivery is like satisfaction Death Valley,” said Bond cofounder and CEO Asaf Hachmon. “Online brands spend tons of money on ensuring consumers have the absolute best user experience while on their website, yet are forced to entrust couriers to deliver products with that same level of care and attention — and all too often they don’t. We learned that firsthand at Shookit, and it’s why we created Bond.”

Nabbing a major Silicon Valley investor like Lightspeed Venture Partners is a notable milestone for Bond. Lightspeed has previously invested in such ecommerce startups as Bonobos, which was acquired by Walmart in 2017, and lending startup Affirm, which was cofounded by PayPal co-creator Max Levchin.

“We’re investors in many ‘web native’ and direct-to-consumer brands and came to know their challenges up close,” added Lightspeed Venture Partners’ Tal Morgenstern. “One of the biggest challenges these brands are facing is last-mile delivery. Customer experience is very much at the core of these brands, but this important touch point with the end user in the real world is often handled by third parties and can be destructive if handled poorly. With Bond, brands can tailor the customer experience and extend their reach to the very doorstep of every customer.”