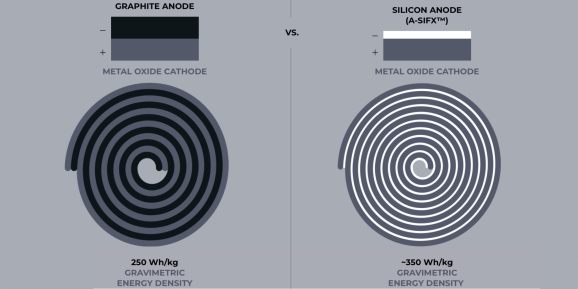 While plenty of engineers have ideas to improve rechargeable batteries, relatively few of the new concepts are ready for mass production. Now Japanese battery materials giant Mitsui Kinzoku and “father of the iPod” Tony Fadell are among the big names backing Advano, a New Orleans-based startup that plans to dramatically improve lithium-ion battery performance by using silicon rather than graphite to store energy.

Advano’s innovation, A-SiFx, will use silicon waste produced during solar panel or semiconductor manufacturing to sustainably produce enough material to integrate or fully replace graphite in batteries, avoiding the need for what would otherwise be an environmentally toxic silicon manufacturing process. Since silicon can store 10 times the energy of graphite, a silicon battery can be smaller and less expensive than a graphite one, or deliver multiples of current performance at the same size.

As Advano CEO and chair Alexander Girau notes, the key challenge with introducing silicon into batteries is harvesting enough material to meet the massive international demand for rechargeable cells while avoiding negative environmental impacts. “The greatest problem of our world is climate change,” said Girau, “and Advano is helping to solve it by making energy more sustainable, cleaner, and cheaper through our silicon-based batteries. To fix the problem, however, the solution must scale.”

Upcycling scrap silicon from existing mass-manufacturing projects provides a viable solution, its backers suggest. “No one has been able to solve four key issues concurrently: material expansion, cycle life, cost, and drop-in manufacturing scalability. Advano’s battery experts are the first to successfully tackle them all,” explains Fadell. “Plus, they’re using sustainably sourced silicon to combat the environmental effects of our transition to electric everything! Advano’s innovative work with silicon is the holy grail for batteries.”

Whether Advano’s technology is actually the “holy grail” remains to be seen. Refining enough silicon to fully replace graphite in batteries is a massive industrial challenge, and it’s unclear whether cells produced with the innovation will actually use 100% silicon or graphite-silicon composites, which would drive down the performance multipliers based on the relative proportions of silicon and graphite. Once other materials are taken into consideration, the real-world benefits may be more in the 40% to 70% range.

Regardless, the company expects its technology to be used in everything from electric vehicles to portable consumer electronics, and if it’s successful the run time improvements may well be impressive. Meanwhile, companies like Sila Nanotechnologies are working on similar innovations, backed by investors such as Daimler and Siemens.