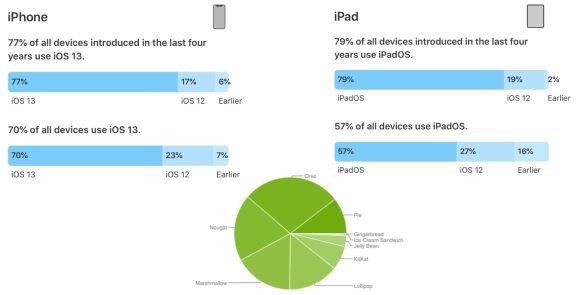 This might not be initially obvious from the numbers, but user adoption of the latest Apple mobile operating systems is actually slow this year. As of the end of January 2020, Apple says that 70% of all iPhones are using iOS 13, and 57% of all iPads are using iPadOS 13, numbers that place the company’s latest OS releases at least two months behind iOS 12’s adoption curve last year. By December 4, 2018, iOS 12 was at 70% adoption across both iPhone and iPad platforms, a number that crossed the 88% mark before iOS 13’s official release in September 2019.

The real world numbers may be better than those raw stats might suggest. Since older iPads and iPhones keep chugging along for years after purchase, in some cases serving as businesses’ cash registers or hand-me-down iPods for kids, Apple provides separate iOS and iPadOS adoption numbers covering devices introduced in the last four years — ones that are more likely to be actively used. By that metric, 77% of iPhones and 79% of iPads are running the company’s latest major release. And most of the holdouts are on iOS 12.

Unfortunately for Google, “slow” adoption by Apple standards looks like a bullet train compared with the last two Android releases. For reasons unknown, Google hasn’t updated its Android distribution dashboard since May 2019, showing Pie (Android 9) at only 10.4% uptake. It publicly disclosed in October that Pie had quietly hit 22.6% adoption, which is still not a great number. Even worse, the company has repeatedly failed to disclose adoption of its current major release Android 10, which went from beta in March 2019 to final in September 2019, and has been trickling out software updates for some phones for months.

As an Apple device user with several Android phones, I’m not completely impartial on this topic, but in the interest of fairness, I’ll place these numbers in some perspective. Apple revealed yesterday that it has 1.5 billion active devices in the marketplace, which while massive is well below the 2.5 billion active Android devices Google counted on May 7, 2019. Assuming another half-billion Android devices have been activated in the last nine months (note: Apple added 100 million in one fiscal quarter), that would suggest Google has twice as many devices to upgrade to get to an Apple-like percentage.

The math isn’t that simple, though. Every new Android device should be shipping with the latest major release, pushing the Android 10 numbers up, but that’s not actually the case. Moreover, unlike Apple, where virtually every counted iOS or iPadOS device is an iPad, iPhone, or iPod touch, Android may be running in all sorts of non-phone, non-tablet devices, including some that could — for unique stability reasons — be better off not being upgraded.

Putting fringe cases aside, though, my sense is that we’ve officially reached the point where even major Android smartphone makers are struggling to keep up with their promised software upgrades for legacy devices. I have one phone that Motorola abruptly decided not to supply with Android 9 despite earlier promises to the contrary, and another that was abandoned on a prior Android release after one major update. More concerning is a recently released OnePlus 7 Pro 5G that’s still stuck on Android 9, awaiting a nonspecific “first quarter 2020” release of Android 10. Android 11 will likely be in beta by then.

Android users understand at this point that software updates are held up by both OEMs and carriers. Assuming Motorola even takes the time to test a new Android release on a given phone, it’s possible that only the Verizon model will receive the update, while the software will never ship for the same device on AT&T. In some cases, the only guarantee an Android OEM fulfills is the delivery of post-device launch Android security updates, and they’ll often only upgrade a phone within the same major OS release it shipped with.

At the end of last year, VentureBeat’s Emil Protalinski said that 2019’s lack of Android dashboard updates suggested that “Google only wants to share tidbits of good news,” and that new numbers likely wouldn’t appear “until Google has something positive to say about Android 10 adoption.” Based on how Android 9 was apparently received by users, and the utter lack of communication on its successor, it’s probably a good idea to stop holding our collective breath for Android dashboard updates, and assume that the iOS/Android uptake race is over. You can decide for yourself whether or not there’s a winner.