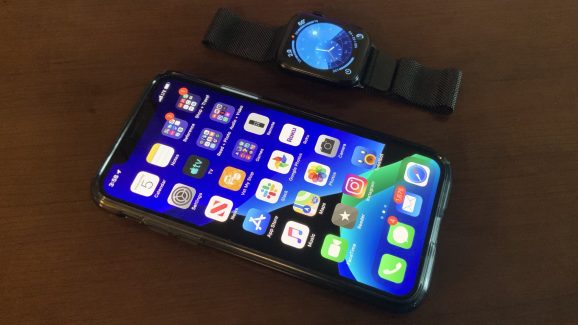 As promised at its September “By Innovation Only” media event, Apple is today starting full public distribution of iOS 13.0 and watchOS 6.0, the major releases of its iPhone and Apple Watch operating systems. While today’s releases are both expected and arriving with some unusual caveats, they each represent milestones for their respective platforms.

iOS 13 brings a full system-wide Dark Mode to the mobile operating system after debuting last year on Apple’s macOS Mojave. All of Apple’s apps and an increasing number of third-party apps already support the feature, which lets you conserve screen brightness at night and/or throughout the day by shifting to a largely black and dark gray palette from the traditional white and light gray one. More robust maps, including Apple-developed street-level “Look Around” photography and greater levels of ground detail, have been added for some cities as well.

Two prior iOS apps, Find My Friends and Find My iPhone, have been merged with this release into a single app called Find My. The revised app is supported by new OS-level location and iCloud syncing features that should help lost devices running iOS 13 to be more easily located, while setting the stage for rumored but as yet unannounced Apple tracking accessories called Tags. Meanwhile, the company is clamping down on third-party use of the OS to quietly gather data on users.

There are also quite a few under-the-hood adjustments that were expected to eliminate bugs and reduce various loading delays, though it’s unclear at this point whether they’ll be offset by new problems. Even late-stage iOS 13 betas were plagued with noticeable new loading and reloading issues in core apps such as Mail, Safari, and Messages.

An improved update, iOS 13.1, was scheduled last week to be released to the general public on September 30, at the same time as an iPad-specific spinoff now called iPadOS. Apple today bumped that timeline up to September 24.

By comparison, watchOS 6 has enjoyed a largely stable progression through its beta testing cycle, which included the introduction of a large collection of new features. Apple Watch Series 3, Series 4, and Series 5 users today gain access to an on-device App Store, direct-from-Settings OS updates, and a handful of new Apple-designed watch faces. Some of the faces include extra-large numbers that are easy to read from a distance, while others bring snazzier analog-style options and a solar clock to the table.

App improvements are numerous, including new tools to measure ambient audio levels, track menstrual cycles, and share Animoji/Memoji images through Messages. More iOS features have been ported to watchOS, including Voice Memos, Calculator, and Audiobooks, along with a people-only version of iOS’s Find My app and a revised Reminders app.

Despite the long list of improvements in watchOS 6, the full slate may not be available to Series 1 and Series 2 users. Apple unexpectedly delayed the release of the new operating system for these older devices until an unspecified date in the fall. Similarly, HomePod users accustomed to getting software updates in sync with major iOS releases will have to wait on a bunch of new features until later as well.

iOS 13 and watchOS 6 are available for free using the iPhone’s over-the-air software update mechanisms today. Following the update, watchOS users should be able to initiate updates directly from the Apple Watch’s own settings menu, though a nearby iPhone may still be required for the download.