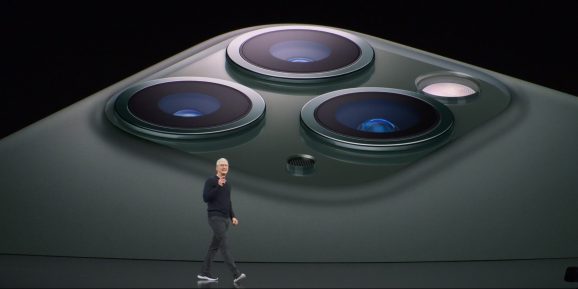 Having trimmed the prices of most iPhone models just ahead of the 2019 holiday season, and launched multiple new services to goose its subscription numbers, Apple positioned itself for the strongest holiday season in its history. Today, the company announced its fiscal first quarter 2020 results, and overall, they blew away expectations: $91.8 billion in quarterly revenue, versus $84.3 billion in the year-ago quarter and $88.3 billion in the first quarter of 2018.

The big number is particularly significant because Apple provided a wide estimate range last quarter, predicting revenues between $85.5 and $89.5 billion — all better than its famously troubled prior holiday performance, but potentially either falling short of or exceeding the 2018 holiday season. Given that the company has historically offered and exceeded optimistic quarterly growth estimates, the range appeared to signal uncertainty over the tariff impact of an ongoing U.S.-China trade dispute, currency exchange rates, and consumer demand for late-stage 4G phones. All of the issues were resolved in the company’s favor.

“We are thrilled to report Apple’s highest quarterly revenue ever, fueled by strong demand for our iPhone 11 and iPhone 11 Pro models, and all-time records for Services and Wearables,” said Apple CEO Tim Cook. “During the holiday quarter our active installed base of devices grew in each of our geographic segments and has now reached over 1.5 billion.”

While iPhones remain Apple’s strongest business segment, wearables and services continue to grow in importance. The Apple Watch Series 5 was a modest update from its predecessor, but overall sales were likely buoyed by aggressively discounted Series 3 models. Additionally, an early 2019 update to the popular wireless AirPods headphones was followed up by the late October release of AirPods Pro, a smaller in-ear model with noise cancellation. Despite selling at a higher price point, the Pro model was largely sold out throughout the holiday season.

Apple also debuted a collection of new services during the second half of 2019, including the Apple Card credit card, Apple Arcade subscription game service, and Apple TV+ video streaming service. The company doesn’t break down revenues from individual services, and TV+ subscriptions are believed to be almost exclusively driven by free trials at this point, but reviews for the Card, Arcade, and prior Apple Music services have been generally positive.

In October, Apple predicted that its gross margin would fall between 37.5% and 38.5%, with operating expenses in the $9.6 to $9.8 billion range, $200 million of other income, and a tax rate of 16.5%. Before today’s release, the average forecast of analysts was that the company would eke out $88.4 billion in sales, just enough to beat the company’s 2018 record, with $4.54 in earnings per share. Such a slim jump would have been similar to the very modest gains seen in prior 2019 quarters.

Instead, Apple’s $91.8 billion in revenues represented a 9% jump over last year’s holiday quarter, with $4.99 in earnings per share, up 19%. The company also said international sales constituted 61% of the quarter’s revenue.