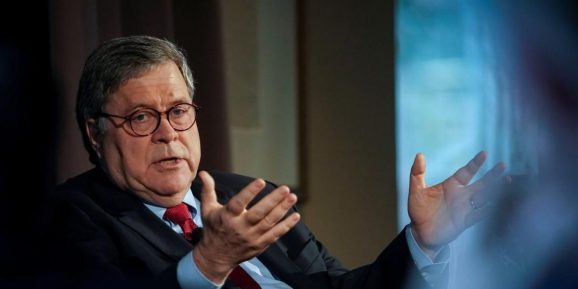 (Reuters) — U.S. Attorney General William Barr on Wednesday questioned whether Facebook, Google, and other major online platforms still need the immunity from legal liability that has kept them from being sued over material their users post.

“No longer are tech companies the underdog upstarts. They have become titans,” Barr said at a public meeting held by the Justice Department to examine the future of Section 230 of the Communications Decency Act.

“Given this changing technological landscape, valid questions have been raised about whether Section 230’s broad immunity is necessary, at least in its current form,” he said.

Section 230 says online companies such as Facebook, Alphabet’s Google, and Twitter cannot be treated as the publisher or speaker of information they provide. This largely exempts them from liability involving content posted by users, although they can be held liable for content that violates criminal or intellectual property law.

Barr’s comments offered insight into how regulators in Washington are reconsidering the need for incentives that once helped online companies grow but are increasingly viewed as impediments to curbing online crime, hate speech, and extremism.

The increased size and power of online platforms has also left consumers with fewer options, and the lack of feasible alternatives is a relevant discussion, Barr said, adding that the Section 230 review came out of the Justice Department’s broader look at potential anticompetitive practices at tech companies.

Lawmakers from both major political parties have called for Congress to change Section 230 in ways that could expose tech companies to more lawsuits or significantly increase their costs.

Some Republicans have expressed concern that Section 230 prevents them from taking action against internet services that remove conservative political content, while a few Democratic leaders have said the law allows the services to escape punishment for harboring misinformation and extremist content.

Barr said the department would not advocate a position at the meeting. But he hinted at the idea of allowing the U.S. government to take action against recalcitrant platforms, saying it was “questionable” whether Section 230 should prevent the American government from suing platforms when it is “acting to protect American citizens.”

Others at the meeting floated different ideas.

The attorney general of Nebraska, Doug Peterson, noted that the law does not shield platforms from federal criminal prosecution; the immunity helps protect against civil claims or a state-level prosecution. Peterson said the exception should be widened to allow state-level action as well. Addressing the tech industry, he called it a “pretty simple solution” that would allow local officials “to clean up your industry instead of waiting for your industry to clean up itself.”

Matt Schruers, president of the Computer and Communications Industry Association, which counts Google and Facebook among its members, said such a solution would result in tech giants having to obey 50 separate sets of laws governing user content.

He suggested law enforcement’s energies might be better spent pursuing the millions of tips the tech industry sent over every year, only a small fraction of which, he noted, resulted in investigations.

“There appears to be some asymmetry there,” he said.

Others argued that different rules should apply to different platforms, with larger websites enjoying fewer protections than internet upstarts.

But other panelists argued that distinguishing one site from another might be tricky. For example, would platforms like Reddit or Wikipedia, which have large reach but shoestring staffs, be counted as big sites or small ones?

The panelists also briefly debated encryption, another area over which Barr has pressed the tech industry to change its modus operandi. Facebook, in particular, has drawn the ire of U.S. officials over plans to secure its popular messaging platform.

“This is a massive norm-setting period,” she said, with any alterations to one of the internet’s key legal frameworks likely to draw unexpected consequences. “It’s hard to know exactly what the ramifications might be.”

(Reporting by Nandita Bose and Raphael Satter in Washington, editing by David Gregorio and Leslie Adler.)