(Reuters) — Facebook on Thursday removed ads by President Donald Trump’s reelection campaign that asked users to fill out an “Official 2020 Congressional District Census” because the ads violate the company’s policy against misinformation on the government’s census.

The ads, which come from the pages of the Republican president and Vice President Mike Pence, link to a survey on an official campaign website and then to a page asking for donations.

“We need Patriotic Americans like YOU to respond to this census, so we can develop a winning strategy for YOUR STATE,” the ad read. 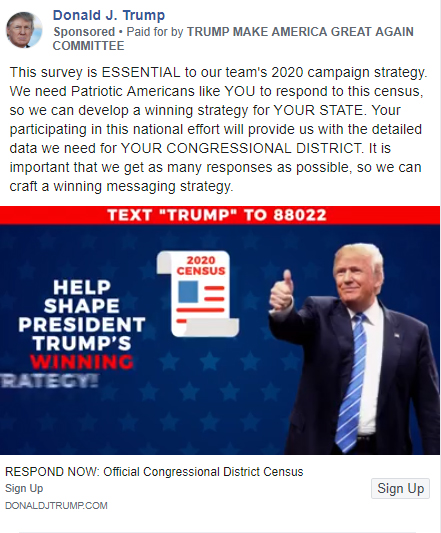 Above: A Facebook ad from President Donald Trump’s reelection campaign asks users to fill out a “census.”

The online newsletter Popular Information, which first reported on the ads, said Facebook had originally said they did not violate its policy.

Civil rights advocates said they pushed Facebook to remove the ads and the company confirmed it had re-reviewed them.

The social media company, which has come under fire for allowing politicians to run misleading advertisements, said in December it would ban ads that aim to limit participation in the U.S. census, which officials and lawmakers fear could be targeted by disinformation aiming to disrupt the count.

“There are policies in place to prevent confusion around the official U.S. Census, and this is an example of those being enforced,” Facebook spokesperson Andy Stone said in a statement.

Earlier on Thursday, U.S. House of Representatives Speaker Nancy Pelosi, a Democrat, slammed Facebook before it decided to remove the ads.

“I know the profit motive is their business model. But it should not come at the cost of counting who is in our country, so that we can provide the services and the rest,” said Pelosi, speaking at a press conference.

The Trump campaign and the Census Bureau did not immediately respond to a Reuters request for comment.

The 2020 census became a political lightning rod when the Trump administration announced plans in 2018 to add a question asking respondents if they were U.S. citizens. The move, which was blocked by the U.S. Supreme Court, was criticized by some states and civil liberties groups who said the question was meant to deter immigrants from participating and help Republicans gain seats in the U.S. Congress.

Members of the House Committee on Oversight and Reform wrote a letter to the Republican National Committee on Thursday, requesting that it stop sending communications that resemble official census documents, citing news reports of fundraising mailers sent by the RNC that say “2020 Congressional District Census” and include questionnaires.

“These mailers are fully compliant with the law, clearly marked as a fundraising solicitation from the Republican National Committee, and in no way resemble the official government census. We are adding language to future mailers to make it even more obvious,” said an RNC spokesperson.

The count, which takes place once a decade, is expected to be filled out largely online for the first time in 2020.

Census officials have been concerned that the census, whose data is used to allocate seats in the U.S. Congress and state legislatures and to guide the federal government in allocating $1.5 trillion a year in aid, could be a target for disinformation.

The Census Bureau has purchased dozens of web addresses with “census” or other keywords in the title to make it harder for potential imposter sites to operate, and held numerous meetings with Twitter, Facebook, and other social media sites in hopes of getting some help monitoring for bad actors.