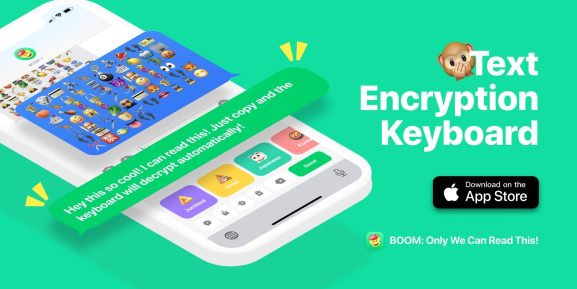 As the COVID-19 pandemic continues to worsen elsewhere the world, reports from initially afflicted China have improved — seemingly thanks to a coordinated medical response, but possibly also because of a government censorship campaign. Once again, and perhaps unsurprisingly at this point, Apple finds itself in the middle of a Chinese censorship controversy, this time for pulling an app citizens were using to share coronavirus news within the country.

Still available outside of China, Huiyu Wang’s Boom – Text Encryption Keyboard app was specifically designed to encrypt text messages, chats, and articles and to decrypt received texts. It employs tricks such as emoji replacement and word jumbles that people can understand despite errors. Users discovered that Boom enabled content to avoid Chinese government filters that screen data for specific key words as it passes through the network, thus preventing the free flow of information about COVID-19.

Boom arrived in the iOS App Store on February 15, as COVID-19 infections raged in mainland China, but it was pulled from distribution in the country this week, Wang said in a tweet, with Apple explaining in an email that it included “content that is illegal in China.” Wang told Quartz that the app likely attracted government attention when it was used to share a COVID-19-related interview Chinese censors were attempting to delete from the internet. The New York-based Chinese developer also noted that his “multiple social media accounts [have] been removed,” as well as an unrelated wallpaper app he developed, seemingly as a punitive measure.

Apple has cooperated with Chinese government app takedown requests on multiple occasions, removing VPNs, software used to track police activity related to Hong Kong protests, a virus-related game, and apps on various other topics. Despite the company’s public stance that privacy is a human right and its promises to protect user privacy through strong on-device encryption, it has been widely criticized for bowing to Chinese pressure to enable government surveillance and storage of user data — a decision that has enabled it to continue manufacturing and selling devices within the country.