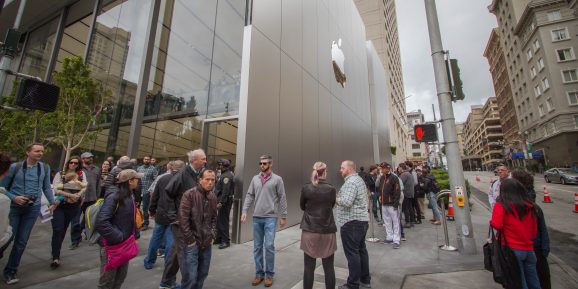 A look at Apple's new retail store in downtown San Francisco. On May 21, 2016, people began lining up around the block for the grand opening.

Dovetailing with comments today from U.S. President Donald Trump that he will attempt to resume the country’s business operations by Easter, Apple has informed employees that it expects to begin reopening retail stores during the first half of April. The plan was disclosed in a memorandum from Apple retail chief Deirdre O’Brien.

As an Apple senior VP of both retail and people, O’Brien is responsible for both the company’s stores and its workforce, which has been scattered from Apple’s Cupertino headquarters into home offices following the outbreak of the novel coronavirus disease COVID-19. O’Brien told employees that the company will be extending its work-from-home arrangements through at least April 5, and will re-evaluate those arrangements on a weekly basis based on workers’ locations.

Apple currently plans to begin the process of reopening brick and mortar locations on a staggered basis, rather than bringing the entire U.S. chain back at once. While the company has closed stores across multiple territories, it has continued to offer online ordering with free home delivery throughout the coronavirus outbreak, and has even launched new products — updated iPad Pro and MacBook Air models — despite regional shelter-in-place requirements for citizens.

The company has previously moved to reopen stores and contract manufacturing facilities in China that were affected by an earlier coronavirus outbreak in Wuhan. It also pulled from Chinese distribution a third-party app that was being used in China to share COVID-19 news despite government censorship, as well as a plague-related game.

Health officials in the United States have warned that the premature resumption of business as normal will lead to a spike in COVID-19 infections that citizens and hospitals are unprepared to handle, potentially leading to hundreds of thousands if not millions of deaths. Following weeks of lockdown measures, President Trump suggested this week that closing down businesses to fight the outbreak was a cure more dangerous than the disease, which he trivialized as flu-like and unavoidable. After publicly floating the prospect of a reversal, Trump today formally pushed to get the U.S. “opened up” by roughly Easter, which will be observed this year on April 12.