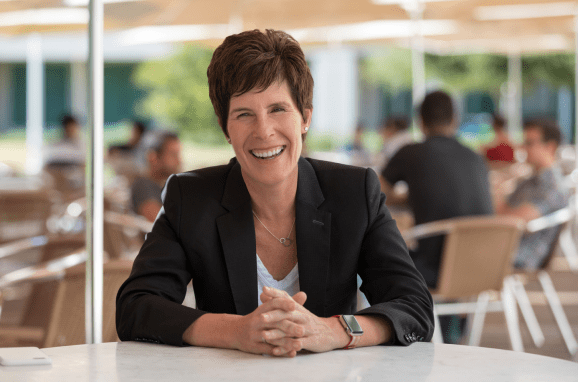 Apple’s retail chief Angela Ahrendts is leaving in April, the company announced today, and will be replaced by Deirdre O’Brien — currently Vice President of People — in a combined role as Senior Vice President of Retail and People. Like Ahrendts, O’Brien will report directly to Apple CEO Tim Cook.

Ahrendts joined Apple five years ago from British fashion house Burberry, where she had been lauded for her work as CEO in merging the company’s physical and online retail stores. Her tenure as Senior Vice President of Retail was marked by dramatic new openings and expansions of Apple’s brick and mortar stores around the world, as well as overhauls of their designs and inner workings — all during a time when sales elsewhere were shifting from physical to digital stores.

O’Brien has been with Apple for 30 years, most recently focusing on the company’s HR side. She was named VP of People in July 2017, shifting from a prior role as VP of Worldwide Sales and Operations, where Cook previously praised her as “the glue that bonds our operations, sales, marketing and finance teams to deliver products to our customers.” It’s unclear how she will simultaneously lead the company’s HR and retail initiatives, which have grown to include 506 physical stores and 35 online stores by Apple’s latest count.

“It is the opportunity of a lifetime to work with, and learn from, such a talented, diverse and imaginative team,” O’Brien said. “I am looking forward to this journey, and to continuing the important work of the People team in supporting all of Apple’s amazing employees.”

Unlike her predecessor John Browett, who was famously hired by Apple from UK retail chain Dixons only to be abruptly dismissed months later as a poor cultural fit for the company, Ahrendts appears to be making an amicable departure from the company. She and Cook both issued statements lauding the change.

“The last five years have been the most stimulating, challenging and fulfilling of my career,” said Ahrendts. “I feel there is no better time to pass the baton to Deirdre, one of Apple’s strongest executives. I look forward to watching how this amazing team, under her leadership, will continue to change the world one person and one community at a time.”

“I want to thank Angela for inspiring and energizing our teams over the past five years,” Cook said. “She has been a positive, transformative force, both for Apple’s stores and the communities they serve. We all wish her the very best as she begins a new chapter.”

Ahrendts has been one of Apple’s most visible executives over the past five years, as well as one of its best compensated. She reportedly outearned all other Apple executives for at least several years during her time at the company, even including Cook.