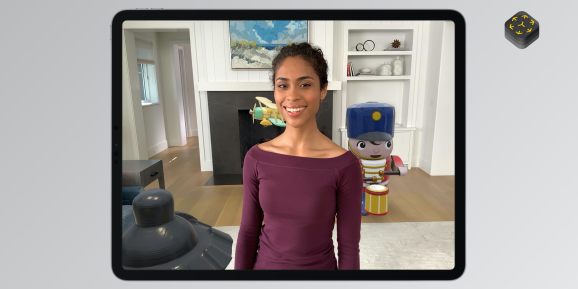 ARKit 3.5 adds a new Scene Geometry API that uses the lidar scanner to create a 3D map of a space, differentiating between floors, walls, ceilings, windows, doors, and seats. The scanner is able to rapidly measure lengths, widths, and depths of objects at an up to five-meter distance, enabling users to quickly create a digital facsimile that can be used for object occlusion — making digital objects appear to partially blend into a scene behind real objects. Thanks to “Instant AR” support, those digital objects can be placed automatically within a space, without users needing to wave the tablet around and give its cameras a sense of the space.

ARKit 3.5 is available now for registered developers as part of Xcode 11.4, Apple’s third-party software development kit. Xcode 11.4 was released today shortly after the final versions of iOS and iPadOS 13.4 became available to the general public.