Miso Robotics, a startup developing robots that can perform basic cooking tasks in commercial kitchens, today announced that it has deployed new tools to its platform in CaliBurger restaurants as part of an advanced approach with CaliGroup intended to improve safety and health standards. The hope is to minimize the threat of infection for patrons and delivery workers during the COVID-19 pandemic, which has sickened hundreds of thousands of people worldwide.

In the coming weeks, in partnership with payment provider PopID, Miso will install a thermal-based screening device in a CaliBurger location in Pasadena, California, that attaches to doors to measure the body temperatures of people attempting to enter the restaurant, along with Miso’s Flippy robot in the kitchen, to address health concerns. Before entering, the staff, delivery drivers, and guests will have to scan their faces, and if the device sensor detects the person has a fever, they won’t be allowed to enter the building.

Miso says that store owners will be able to opt into text messages alerting them that someone whose temperature reading is in line with health and safety standards is at the door, at which point employees will be able to open the door manually. Other settings will allow for security and privacy measures, including facial recognition linked to approved employees or residents. 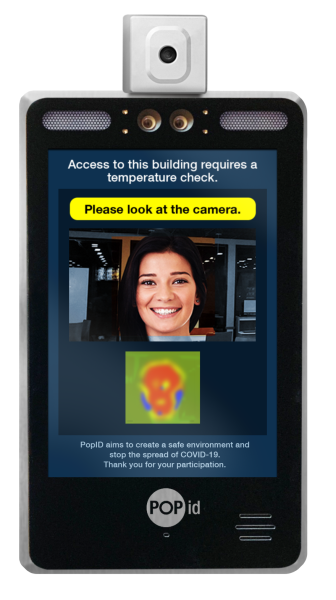 “While the initial use case will be for CaliBurger, the technology could be applied to other buildings such as offices, homes and other public places of business to ensure the health and safety of those entering,” said a Miso spokesperson via email. They also noted that while all scan data is anonymized, it can be pooled together to analyze patterns in populations and regions and identify trends. “Wider adoption could serve to identify hot spots and pikes in the spread of COVID-19 and other transmissible viruses within populations and regions, serving as a source of information for officials seeking to traction initial sources of outbreak.”

Fever detection is on trend. Various companies have begun deploying cameras that detect people who may have COVID-19 by using thermal imaging, including Austin-based Athena Security. Ramco Innovation Lab in Singapore recently unveiled a facial recognition-based system with embedded temperature recording, and in China, authorities have reportedly used drones to detect signs of fever.

Miso also says it will also install physical PopID terminals so that guests can transact without touching a panel, using cash, or swiping a credit card — all of which can transfer pathogens. Customers will also be able to pay using PopPay on the CaliBurger website.

According to Miso, CaliBurger intends to implement these technologies in all of its restaurants.

Miso claims that ROAR can prep hundreds of orders an hour thanks to a combination of cameras and safety scanners, obtaining frozen food and cooking it without assistance from a human team member. It alerts nearby workers when orders are ready to be served, and it takes on tasks like scraping grills, draining excess fry oil, and skimming oil between frying as it recognizes and monitors items like baskets and burger patties in real time. Plus, it integrates with point-of-sales systems (via Miso AI) to route orders automatically and optimize which tasks to perform.