Microsoft today announced that on April 21, Office 365 will become Microsoft 365, or “the subscription for your life.” The new suite builds on Office 365 with “new AI, rich content and templates, and cloud-powered experiences.” On April 21, Microsoft 365 Personal and Microsoft 365 Family subscriptions (up to six people) will replace Office 365 Personal and Office 365 Home. The pricing will remain the same: $7 per month and $10 per month, respectively. The Microsoft 365 plans include everything already in Office 365, including desktop Office apps, 1TB of OneDrive cloud storage per person, 60 Skype minutes, security features, technical support, plus the new Office features also announced today. Those features are spread across Word, Excel, PowerPoint, Outlook, and Microsoft Teams. (Even Edge is getting new consumer features, though the browser doesn’t require a Microsoft 365 subscription, of course.)

If Microsoft 365 sounds familiar, that’s because Microsoft 365 debuted for businesses back in July 2017. The more expensive Microsoft 365 Enterprise and Microsoft 365 Business subscriptions include business-specific security and management functionality. Half a billion people use the free Office applications and services (Word, Excel, PowerPoint, Skype, Outlook, OneNote, and OneDrive) for Windows, macOS, iOS, Android, and the web. Microsoft shared today that more than 38 million consumers subscribe to Office 365 (up from 37.2 million in January). By comparison, there are over 200 million monthly active Office 365 business users.

“365” branding nonsense aside, Microsoft started rolling out new Office features today (reaching its 38 million subscribers “over the next few months”). They are supposed to help you “become a better writer, presenter, designer, manager of your finances, and deepen your connection to the people in your life.” Microsoft also unveiled a Microsoft Family Safety app and Microsoft Teams for consumers arriving “in the coming months.” But first, let’s talk about the Office features.

Microsoft 365 subscribers are getting over 8,000 images and 175 looping videos from Getty Images, plus 300 new fonts and 2,800 new icons to use in Word and Excel. They will also get over 200 new premium templates for Word, Excel, and PowerPoint. The templates include resumes, wedding invitations, newsletters, and birth announcements, as well as coloring books and reward charts for kids.

While Word itself isn’t getting new features, the AI-powered Microsoft Editor is now accessible across Word and Outlook.com, plus as a Google Chrome and Microsoft Edge extension. Anyone can use Editor’s basic capabilities, but Microsoft 365 Personal and Family subscribers will have access to advanced grammar and style refinements. Read Khari Johnson’s take on the Microsoft Editor news here.

Excel is getting a bunch of new features available to Office Insiders this spring. Microsoft 365 subscribers will get them “in the coming months,” starting in the U.S.

Money in Excel will help you manage, track, and analyze your spending. The feature connects to your bank and credit card accounts, imports transactions and account balances, and provides personalized insights. For example, Money in Excel can tell you how much you’re spending on categories like groceries each month. It can also alert you about price changes for recurring payments, bank fees, overdraft limits, and so on.

Excel is also getting new data types for over 100 topics powered by Wolfram Alpha. These include food, movies, places, chemistry, and even Pokémon. If you convert plain text and numbers into a data type, Excel will surface visual and interactive data cards. For example, if you convert “avocado” to a Food data type, Excel will show its nutritional information. Or, if you’re considering adopting a dog, you can compare different breeds using the Animal data type, which provides images, facts, and their temperaments. Other examples Microsoft gave include moving to a new city or helping your kids learn chemistry. 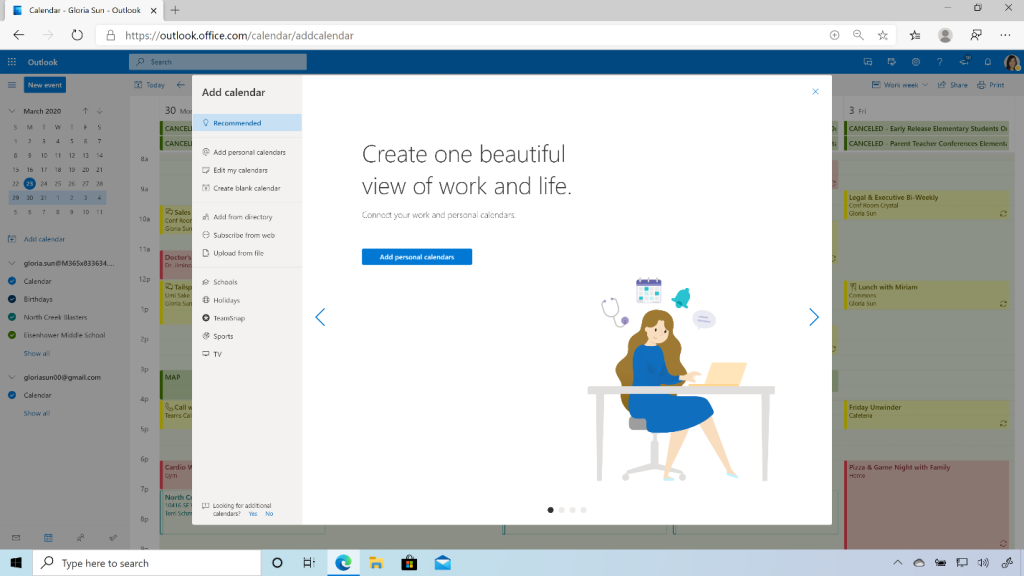 Outlook is getting new functionality to manage your work and life commitments. Outlook on the web will let you link your personal calendar to your work calendar. That way you can share your real availability to work colleagues while maintaining privacy around the details of personal appointments and business meetings. Next up, Play My Emails, where Cortana provides an intelligent read-out of your emails on iOS, will soon use Microsoft Search. You’ll thus be able to use natural language to speak or type. The new search functionality and Play My Email on Android will start rolling out “in the coming months.”

Lastly, Microsoft unveiled Microsoft Family Safety, a new Android and iOS app for Microsoft 365 subscribers. The app manages screen time across Windows PCs, Android, and Xbox. It also offers location sharing and notifications when a family member arrives or departs a location like home, school, or work. It even offers driving reports to help build better habits behind the wheel. The main purpose, however, is to protect your kids as they explore and play games. It shows you how they are spending their time, lets you set limits, and steers them away from content that you feel is not age appropriate. Microsoft said kids will be able to opt out of the app and dispute their parents following their movements. A limited preview of the app will be available “in the coming months.”