Ever since last December’s Snapdragon Tech Summit — an event focused on breakthrough mobile chipsets — I’ve been thinking about how critical “old” input peripherals remain in modern devices. Qualcomm’s latest Snapdragons are powerful enough to let tiny smartphones play Xbox One-class games or enable tablets to run Windows PC apps, but without traditional controllers such as gamepads, mice, or trackpads, convincing people to fully replace their consoles or laptops with mobile devices is an uphill battle.

Consider Apple’s iPads, which spent the last decade as midway points between phones and laptops, seemingly because Apple didn’t want to kill either of its cash cows. Everyone agrees that iPads redefined tablets, but they haven’t supplanted business computers. I’d argue that input peripherals were the key bottleneck: Apple has continually evolved iPad devices and pushed hard to position them as post-PC computers, but millions of business users weren’t ready to make the switch without traditional laptop input devices. By contrast, Microsoft had no legacy laptop business to worry about and was glad to win “convertible tablet” customers, using Surface trackpad-keyboard accessories to bridge the laptop gap.

Today, iPad users are finally entering the trackpad-keyboard era with the release of the first Apple-backed products to include both traditional input devices within the same form factor. As Apple’s own Magic Keyboards for iPad Pro prepare to ship to the earliest adopters, Logitech is shipping a much less expensive alternative called the Combo Touch. At $150, it’s half the price of Apple’s Magic Keyboard — but only designed for iPad models Apple isn’t yet addressing with its own accessories.

That’s good news for budget-conscious iPad users, and a solid preview of what’s coming soon to Apple’s Pro tablets. Logitech revealed Combo Touch in sync with Apple’s Magic Keyboard announcement, which is to say that it had some early access to Apple’s plans, unlike Brydge, maker of a more expensive iPad Pro-only alternative that hasn’t yet shipped but is already being pilloried for poor trackpad performance. 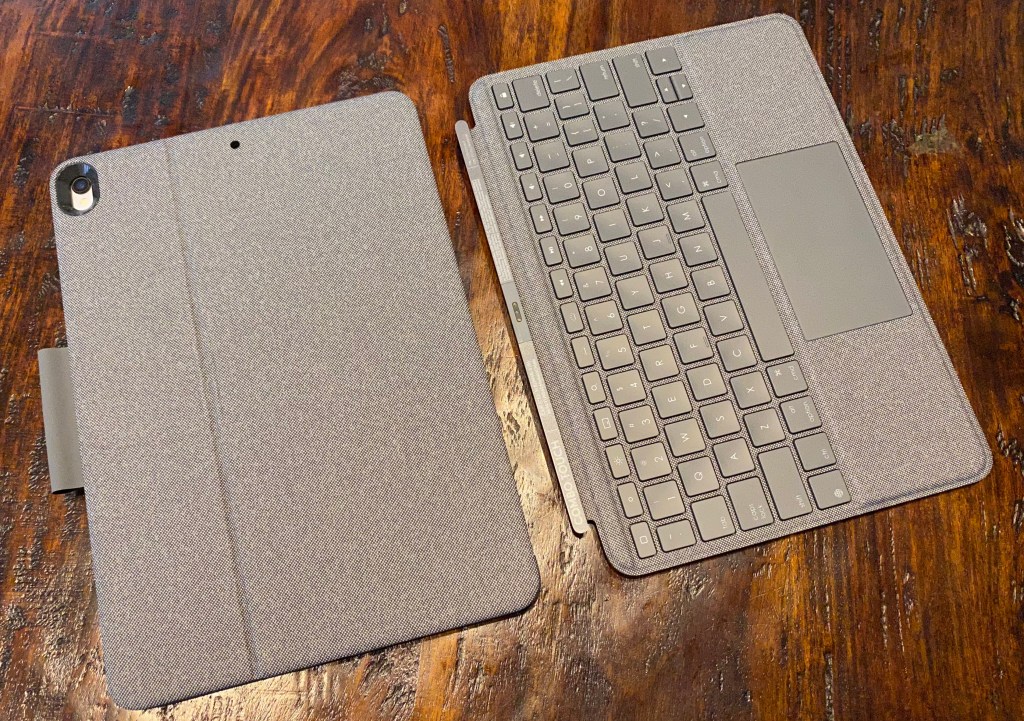 One version of Combo Touch has a case built to fit the seventh-generation (10.2-inch) iPad, while the other fits the iPad Air 3 and discontinued 10.5-inch iPad Pro. In other words, there’s now a way to get a baby Apple laptop experience for under $500: $329 for the iPad, $150 for the trackpad-keyboard. Best of all, the trackpad-keyboard portion detaches magnetically from the rest of the case when you don’t want to carry around the extra bulk.

If you’re familiar with Microsoft’s Surface trackpad-keyboard accessories, you’ll instantly understand the Combo Touch design. Like Microsoft, Logitech has embraced the use of fabric across the keyboard’s edges and palmrests, extending the soft, graphite-colored material to the back of the iPad case. Almost everything else is made from matching gray plastic, including the chiclet-style keys, which are backlit with five levels of lighting that can be controlled through a Logitech app. The keyboard also includes a full row of iPadOS shortcut keys — Apple doesn’t even include those on its own iPad Pro Magic Keyboards. 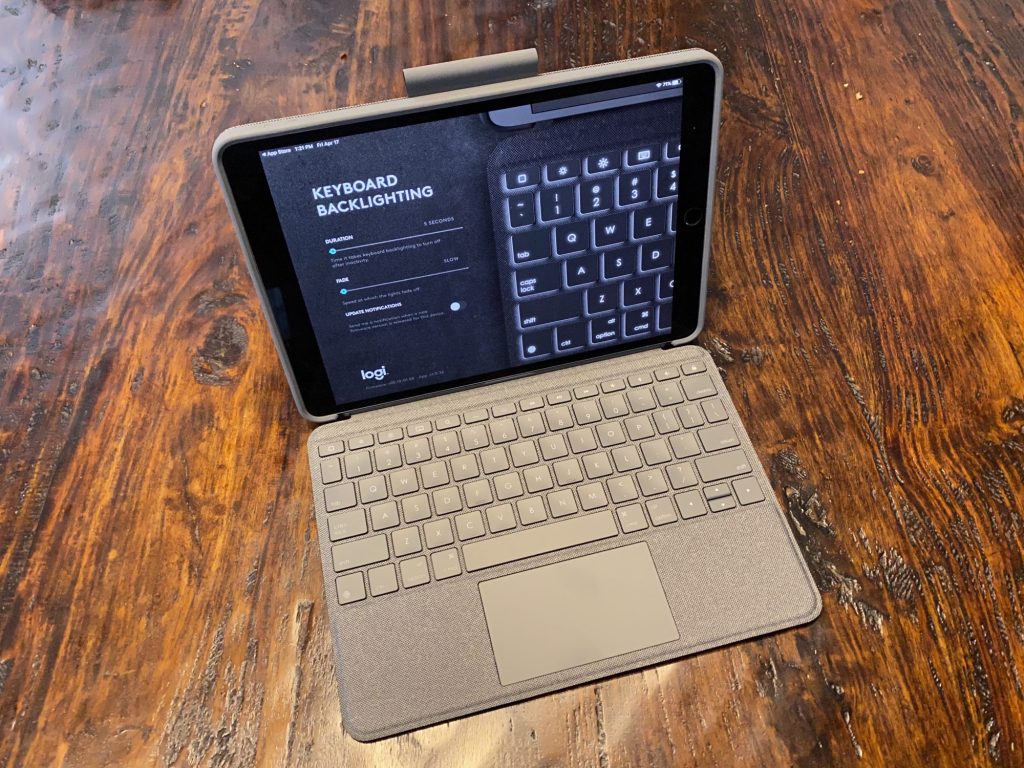 The real star of the show here is a trackpad, which feels like it’s made of glass and has an older Apple-style springboard design for physical button presses. There’s enough space for four adult fingers to rest across the surface comfortably from their tips to their middles, and the glass feels cool to the touch. It’s also pretty responsive, though I’ll want more time to play with it using specific iPad work apps, as well as even more customization within future versions of iPadOS.

Logitech also includes a fold-out rear iPad stand that adjusts from 20- to 60-degree reclines. Apart from the fabric finish, it feels substantially similar to the integrated stands on Surface tablets, which have forever been missing from iPads, precluding them from standing up on their own. Because Logitech’s using that stand instead of an iPad/keyboard hinge — the Magic Keyboard’s appears to be very elaborate — the case occupies a fair bit of space on a tabletop. Also TBD: whether I’ll want to use it in my lap. 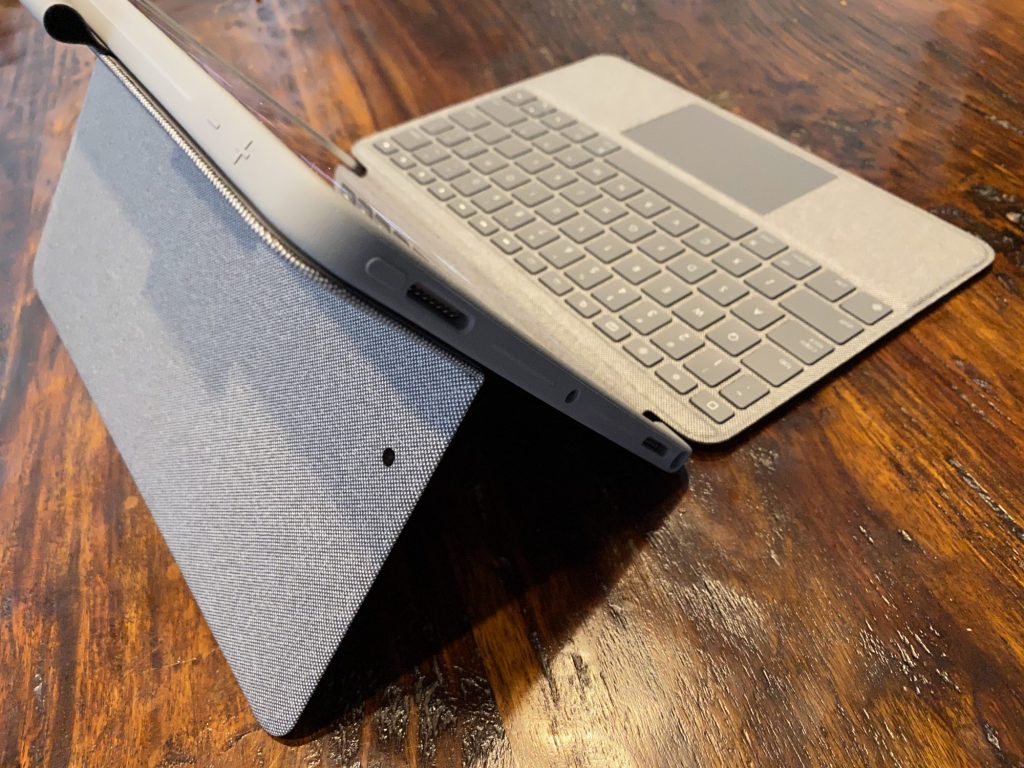 Beyond ergonomic issues, I used the words “baby Apple laptop” largely because Apple hasn’t fully unleashed the iPad’s potential as a transformable tablet-slash-laptop. iPadOS 13.4 unexpectedly added system-wide trackpad and mouse support to all tablets capable of running the software update, a step that was more than trivial to the company. Rather than just adding an arrow-shaped cursor that passively floats over everything, Apple uses a circular cursor that transforms into highlight blobs as it passes over certain UI elements — a visual hint that even deeper trackpad integration will arrive in iOS 14 later this year.

Even at this early stage, it’s clear that adding a trackpad to the iPad will change how the device is used. Attach the accessory magnetically, and all of a sudden, a $329 tablet looks and works like a laptop. With no real work needed to make the new input accessory come to life, I was able to get up and typing on a high-quality keyboard akin to a more expensive machine, with the cursor appearing as necessary for input as I navigated around the screen. That gigantic area normally occupied by an iPad virtual keyboard was gone, turned back into useful screen real estate, and I didn’t have to “gorilla arm” my way across the desk to access apps. 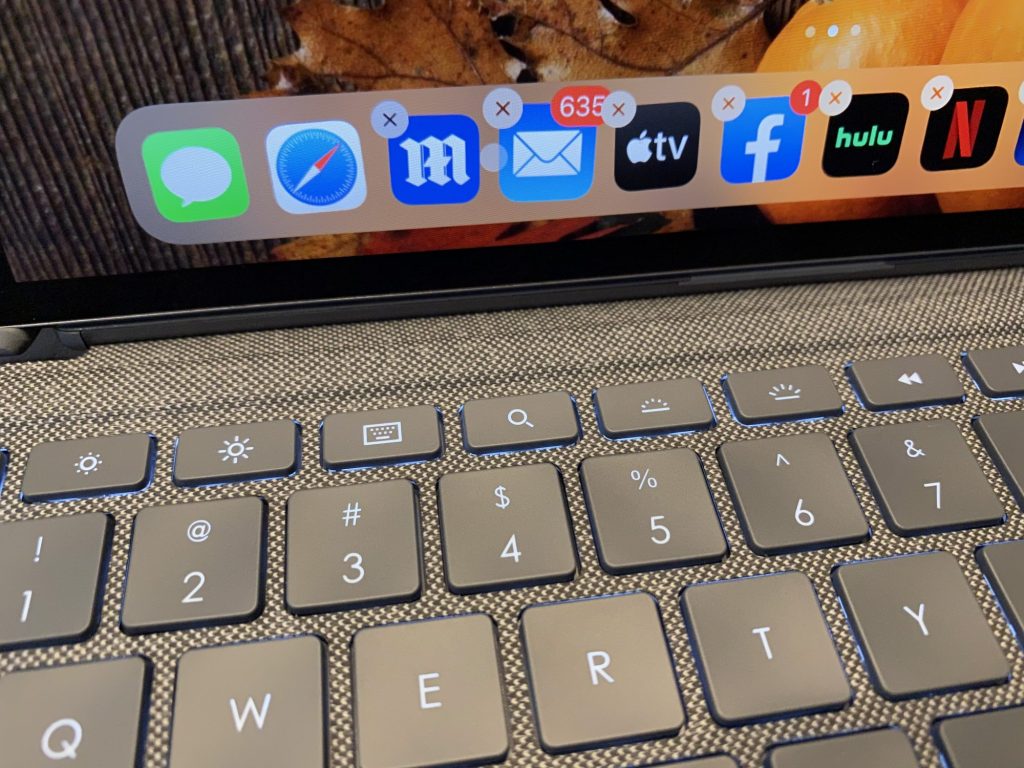 And this isn’t even the Pro-level experience; it’s going to be interesting to see how much better Apple’s own Magic Keyboard will be at twice the price. The Combo Touch feels right-priced at $150, while the current iPad Pro Slim Folio Pro shown above sells for $120 (11-inch) or $130 (12.9-inch) minus the trackpad. Notably, the Slim Folio Pro’s keyboard is Bluetooth-based, adding an additional pairing step that’s not necessary with Combo Touch’s iPad Smart Connector-based interface.

What’s missing now is the laptop-class software — at least, most of it. Apple has updated its own Pages, Numbers, and Keynote apps to support the new trackpads, but other companies are at varying stages of the process. I’m planning to do some more testing of Combo Touch and other iPad keyboard-trackpad options in the near future and will have some more thoughts on what the experience is like from accessory to accessory. At this point, I’m very optimistic about the iPad hardware and accessory parts of the equation and keeping my fingers crossed that iPadOS and its apps will hold up their end of the bargain.