And then there is Terminal, which helps startups build remote engineering teams by doing all the heavy lifting for them. Terminal operates strategically placed engineering hubs that U.S. companies can use to tap technical talent abroad. But the physical hubs are only part of the story, as many of Terminal’s clients already operate remotely but use its service to sidestep the logistical headaches that come with hiring in other countries, including navigating local legal and tax structures, running recruitment processes, and operating essential services such as payroll and HR. It’s all about helping companies scale their engineering teams without requiring staff to relocate.

With the current pandemic likely forcing companies to embrace remote working long into the future, if not permanently, Terminal could find itself in high demand.

“Our campuses have always served as a meeting point for teams to gather, brainstorm, and explore creative solutions but were never mandated as part of the Terminal experience,” CEO Clay Kellogg told VentureBeat. “We have clients today that are completely remote and have found [that] our processes, tools, and systems — especially around building distributed cultures — have been vital to ease the transition. We expect this to be a growth area as a result of COVID-19.”

Terminal, which launched out of stealth back in 2017 and has two corporate hubs in San Francisco and New York, counts several tech-focused campuses throughout Canada and Mexico. This week, Terminal announced its first acquisition, snapping up Austin, Texas-based AI-powered recruitment startup Roikoi for an undisclosed figure. This comes shortly after Terminal raised $17 million from big-name investors such as Kleiner Perkins, adding to a previous roster of investors that includes Yahoo founder Jerry Yang and Peter Thiel, via his Thiel Capital VC firm.

As a result of the acquisition, Roikoi as a brand is no more, and the service is now only available as part of Terminal, where it is now deployed as an automated referral-sourcing tool called the Terminal Talent Graph.

The Talent Graph helps Terminal engineers identify and “vote up” top talent in their professional networks, with the Roikoi engine automatically matching the mostly highly ranked engineers with open positions across all the hiring companies in Terminal’s client base, which include Hims & Hers, Bluescape, and Nextdoor. The platform also features built-in engagement and outreach tools to enable conversations with candidates.

Using natural language processing (NLP), the Terminal can now scan job descriptions and resumes to find the best matches, parsing specifics such as technical expertise, location, years of experience, and employment history, among other factors. The scoring algorithm adopts a heuristic model to identify the best candidates, with machine learning (ML) deployed to train the system based on past performance in successfully matching candidates with positions. 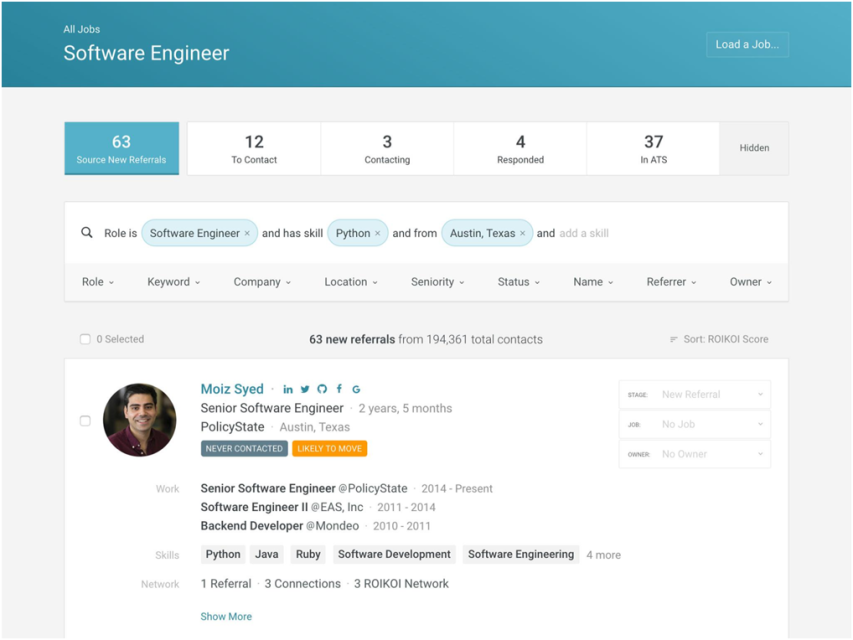 The timing of the acquisition is certainly notable, coming as many technology companies — large and small — will find it difficult to hire. The tech talent pool in the U.S. was already stretched, and social distancing and travel restrictions have only compounded the situation.

While remote working was already a growing trend, COVID-19 seems to have accelerated the push toward cloud-based collaboration and communication. Earlier this week, Alibaba revealed plans to invest $28 billion in cloud infrastructure over the next three years, while Amazon’s first African datacenters recently opened for business (though this was already in the works). Elsewhere, Zoom’s video-conferencing user base has gone through the roof, jumping from 10 million daily users in December to more than 300 million today.

“A remote inflection point was coming with the rise of cloud platforms and global nature of talent, but no one could have predicted the acceleration of the shift caused by COVID-19,” Kellogg added. “The global shutdown has ushered in sudden investment in infrastructure to enable distributed operations and a new generation of remote workers and managers.”

Then there is the issue of immigration. The U.S. has adopted an increasingly hardline approach that has only been exacerbated by the COVID-19 pandemic. President Trump this week enforced an emergency suspension of some immigration green cards due to the pandemic. The ensuing uncertainty could impact the global talent pool available to U.S. tech companies — Duolingo cofounder and CEO Luis von Ahn said the green card restrictions may force it to “open offices and move jobs” outside the U.S.

There are other factors at play here, including the issue of climate change. Air pollution has dropped substantially as cities have entered lockdown, leading major conurbations such as Milan to rethink their use of cars — 35 kilometers (22 miles) of streets will be turned over to cyclists and pedestrians once the Italian city’s lockdown lifts.

Once we emerge from the COVID-19 crisis, it’s likely companies and governments will retain certain protocols established during lockdown, whether in the name of reducing carbon emissions or opening to a much broader tech talent pool. Just yesterday, recruitment search engine Indeed rolled out a new feature that allows employers to specify whether a job they’re advertising is remote, be that permanently or temporarily due to COVID-19.

“Accessing global talent outside of a company’s traditional HQ market has always been the Terminal approach, but now we’re seeing a lot more support for this way of thinking and a dispelling of myths about loss of productivity,” Kellogg added. “This is opening up new doors for us with more traditional leaders who didn’t support remote work but now understand the many benefits of doing so. As the economy recovers, everyone expects remote workers to lead the road to recovery.”