Coronavirus-related closures of retail stores and restaurants have received the lion’s share of attention over the past two months, but other public gathering spaces have been similarly impacted, including art galleries and museums. Today, museum app maker Cuseum debuted Museum From Home, an augmented reality solution that lets users experience famous works of art as if they’re hanging on their own walls, using handheld devices to inspect each piece up close.

The Museum From Home feature works as simply as one might expect: Using an iOS app such as Cuseum’s free [AR]T Museum, you select a piece of art from a gallery of choices, aim your device in the direction of a wall, and then watch through the device’s screen as the object anchors itself in place. You can move closer to the piece for further inspection, including seeing its frame. And thanks to Apple’s ARKit framework, the app can occlude the virtual object if a person walks in front of it.

Though select “essential” businesses are beginning to reopen in some cities, social distancing measures are expected to dramatically reduce crowds for months, imperiling the operations of even the most popular large public spaces. Shops and restaurants can count on continued demand for products, services, and food to bring customers back, but more optional attractions might not be as lucky. Art museums will likely find that maintaining connections with both annual members and one-off patrons is critical to avoiding financial difficulties or closures — and augmented reality could help bridge the gap. 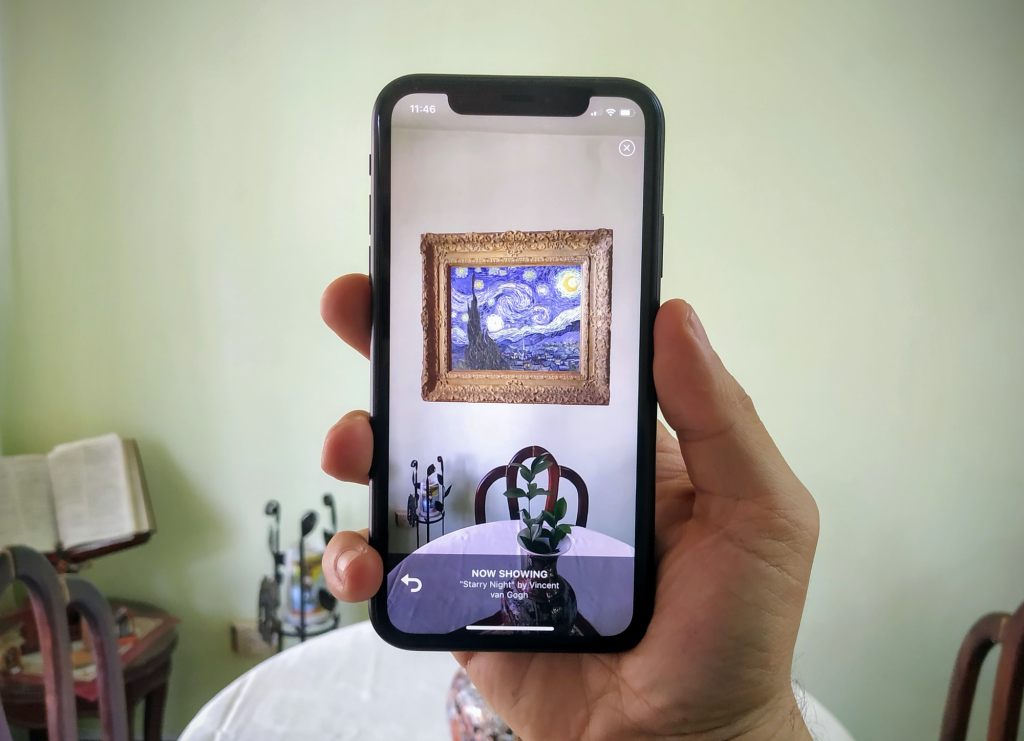 While viewing art through an iPhone’s screen isn’t quite the same as seeing it live in a gallery, Cuseum cited a 10-month research study suggesting that people have similar — perhaps even better — aesthetic experiences when interacting with AR representations of artwork compared to originals. App users might not have the ability to see the finest 3D details on digital paintings, but they can get close up and view art from angles that might be difficult in a real gallery, perhaps engaging the brain more fully than would happen from a quick glance or an attempt to see a work through a crowd of people.

Cuseum’s current partners for the Museum From Home feature include the White House Historical Association, San Diego’s Timken Museum of Art, Kansas City’s Kemper Museum of Contemporary Art, Tucson’s Center for Creative Photography, the North Carolina Museum of Art in Raleigh, and Canada’s Royal Tyrrell Museum in Alberta. That said, Cuseum’s app framework is used by other museums, including Massachusetts’ MOCA, Miami’s Pérez Art Museum, and San Francisco’s MOMA, which could expand the AR availability of major works of art in the foreseeable future.

Other companies have used AR to bring art and museum objects into homes. Last year, Apple offered [AR]T Walks and installations to Apple Store customers, and Seek XR debuted an educational tool that uses 3D AR models of famous objects to teach art and history, among other topics. Cuseum previously used AR to recognize and annotate pieces of art hanging in real-world galleries.