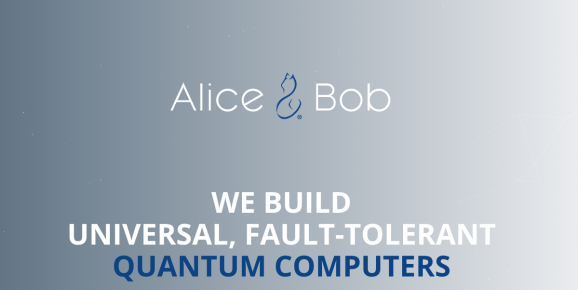 Alice&Bob has raised $3.3 million to join the quantum computing arms race by accelerating research that promises to make this type of next-generation computing more stable.

Elaia Partners and Breega led the round for the Paris-based startup, which has developed its first prototype. The company is using research that has been developed across an unusual consortium of French universities and research institutes.

The founders claim they are close to solving one of the fundamental scientific problems that has limited development of more powerful quantum computing. Making good on that promise could have a huge impact across industries eager for a new type of computing architecture that promises greater processing horsepower. This could be used to power applications such as AI, autonomous products, and personalized medicine.

“We’re really aiming for the perfect quantum computer and not settling for anything in between,” said Alice&Bob CEO Théau Peronnin.

Quantum computing has attracted hype over the past year as corporations such as IBM, Microsoft, and Google have poured money into the field and begun touting various milestones. Startups are also attracting growing investment, and European leaders believe the region could become a technical and entrepreneurial leader in quantum computing in the coming decades.

Of course, all of this depends on whether quantum computing can ever truly deliver on its potential.

The current standard computing architecture uses processors that send electric pulses through gates that can exist in one of two states: open or closed (1 or 0). By operating at the atomic level, quantum computers are powered by “quantum bits” or “qubits” that can exist in multiple states. That would theoretically allow these machines to perform such massive processing chores as simulating the human brain.

However, a range of fundamental scientific problems must be solved to make such computing power, which remains highly volatile, a reality.

Getting particles to exist for a useful length of time in a quantum state — “quantum entanglement” — is an enormous physics problem. Once the qubits are asked to start performing any computing tasks, they quickly encounter a host of barriers that initiate “quantum errors” and cause them to break down.

Engineers have devised a range of patchwork approaches to address these errors (“quantum error corrections”) and maintain stability. Many of these imperfect solutions are being embraced to develop working quantum computers that can function in the short term, but these fixes limit their upside in the long haul. In addition, these solutions make it difficult to build any quantum machines at enough scale to have a real impact.

Peronnin and his cofounder, Raphaël Lescanne, officially created Alice&Bob in February to commercialize research being done across France to target the stubborn issue of “quantum errors.” The cofounders are affiliated with France’s Ecole Normale Supérieure, at the Paris and Lyon campuses, respectively.

The company name refers to standard scientific lingo that labels the sender (point A) and the receiver (point B) of a message as “Alice and Bob.”

The pair said they are using research that has found ways to limit some errors and is on track to solve other errors. One prototype reduced the number of errors by a factor of 300 using a process that automates the corrections.

“Our prototype shows how autonomous error correction can suppress exponentially some of the errors in a quantum computer,” Peronnin said.

That would allow them to build a quantum machine that uses a simpler and more stable design. This fault tolerance would be the key to building breakthrough hardware, they said. With this new generation of computing, Peronnin said hardware will be the key differentiator for companies that operate in this field, rather than the software or algorithms that run on it.

The company has set a target of five years for its first fully operational quantum computer. If it delivers, that would cut in half the 10 years currently predicted for an error-free quantum computer. There is ongoing debate about whether quantum computers will really be able to replace current processing architectures or whether they will only be superior for certain narrowly defined tasks.

The Alice&Bob team argues that their approach will eventually be able to expand the impact of quantum computers to a much wider range of industries and tasks.

“If you have a fault-tolerant universe on a quantum computer, you can already pretty much change the face of the world,” Peronnin said. “That’s mostly due to the new types of chemistry and material science that you will enable.”