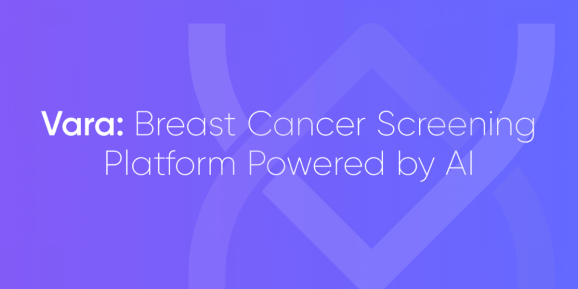 Vara (formerly Merantix Healthcare), a startup developing an AI system that screens for breast cancer, today announced that it raised $7 million. The proceeds will be put toward further European expansion and developing new uses for the company’s data stores, a spokesperson said.

Breast cancer is the most common cancer in women worldwide, with nearly 1.7 million new cases diagnosed in 2012, according to the World Cancer Research Fund International. Screenings like mammography have proven effective at detecting early signs, but they take weeks to process, and a feared radiologist shortage could affect the ability of health systems to manage the disease.

Vara’s solution is an AI-powered “second reading service” that ostensibly reduces turnaround time while boosting patient intake. Using an algorithm trained on a corpus of 2.5 million breast cancer images (and augmented with annotations from over 15 board-certified experts), Vara detects normal mammograms and flags them in a worklist, prewriting reports for experts to double-check and approve with a click. Within a viewer tool, screeners can report suspicious findings directly on images using multiple workstations without having to install anything. And they can optionally send exams to Vara’s network of sub-specialized breast cancer experts.

Vara’s is a less outwardly flashy approach than that taken by Google Health, which claims to have developed a tumor-screening AI that achieves better results than human experts. (A separate Google model can supposedly predict metastatic breast cancer with 99% accuracy.) Researchers at MIT’s Computer Science and Artificial Intelligence Laboratory and IBM say their models can precisely predict the onset of fast-spreading breast cancer. And Kheiron, which directly competes with Vara, offers a platform that’s already certified for use as a second reader in Europe, with pre-commercial pilots, clinical studies, and tests scheduled to go live in the U.K. and U.S. this year.

But Vara claims its platform detects breast cancer at “a much earlier stage” insofar as it deprioritizes healthy cases, potentially helping to focus on those with higher likelihoods of being suspicious. The company points out that while over 250 million mammograms were conducted last year, only 3 in 100 screened women actually have suspicious findings and need to be recalled.

“During the COVID-19 crisis, people often forget to talk about the suffering brought to families around the world by breast cancer. But because of the strain on healthcare systems, mammograms have been cancelled, resulting in breast cancers (which could have been detected at an early, treatable stage) being missed,” CEO and cofounder Jonas Muff told VentureBeat. “In Germany alone, around 500,000 screenings have not been conducted during the last two months, which has led to approximately 3,500 cancers not being detected as early as they could have been. Similarly, the Dutch Cancer Registry shows a decline of up to 50% diagnosed cancers because of COVID-19 incurred cancellations. Vara is now commercially available in Europe to help screening providers offer timely screenings to women whose exams have been cancelled during the lockdown.”

Entrepreneurs Jonas Muff and Stefan Bunk cofounded Vara in 2018, which grew in the subsequent two years to 25 medical specialists, engineers, and entrepreneurs following backing from venture studio Merantix. (Merantix specifically concentrates on building “AI companies,” furnishing companies with code, data, and insights from other Merantix graduates.) The Berlin-based team says its technology — which has a CE Mark, indicating it meets the European Union Directive’s standards for medical devices — has been implemented by 15 Europe-based screening centers performing between 25,000 and 50,000 mammograms per year.

In the near future, Vara plans to bring the platform to programs in Germany, Spain, Poland, Austria, Switzerland, and the U.K.

Omers Ventures led Vara’s series A funding round with participation from Think.Health, Soleria Capital, and Plug and Play, bringing its total raised to €9.5 million ($10.57 million) As a part of it, Omers Ventures associate director Bryony Marshall will join the startup’s board of directors.