One year ago, the Khronos Group released the royalty-free mixed reality standard OpenXR in an effort to make cross-platform software coding easier for VR and AR developers. Today, Khronos is trumpeting OpenXR’s availability across a collection of well-known headset platforms, some with full support and others in developer preview form, with additional backing from key chipset and XR accessory makers.

As of now, OpenXR apps can run on Microsoft’s Windows Mixed Reality headsets and the HoloLens 2, as well as the Oculus Rift and Quest platforms — a feat more impressive than that brief list might suggest. Supporting all of these headsets meant Microsoft and Oculus had to release OpenXR-conformant runtimes for both Intel and ARM architectures. For businesses and developers, that means the same app will be able to run across tethered PC headsets or standalone Android-based and HoloLens mixed reality goggles without custom modifications, saving money and development time while creating more universal user experiences.

Other major PC platforms have also launched OpenXR developer previews, including Valve’s SteamVR and the high-end XR headsets from Varjo, which focuses on ultra-high-resolution displays for industrial and military applications. “Now is the time for developers and engine vendors to start looking at OpenXR as the foundation for their upcoming content,” said Valve’s Joe Ludwig, noting that the standard will let “one build of their VR title … ‘just work’ across the entire PR VR ecosystem.” Ultraleap, perhaps best known for Leap Motion’s hand-tracking accessories, has also released an OpenXR developer preview for its trackers, while Collabora’s Monado open source runtime is “approaching conformance” with the standard. 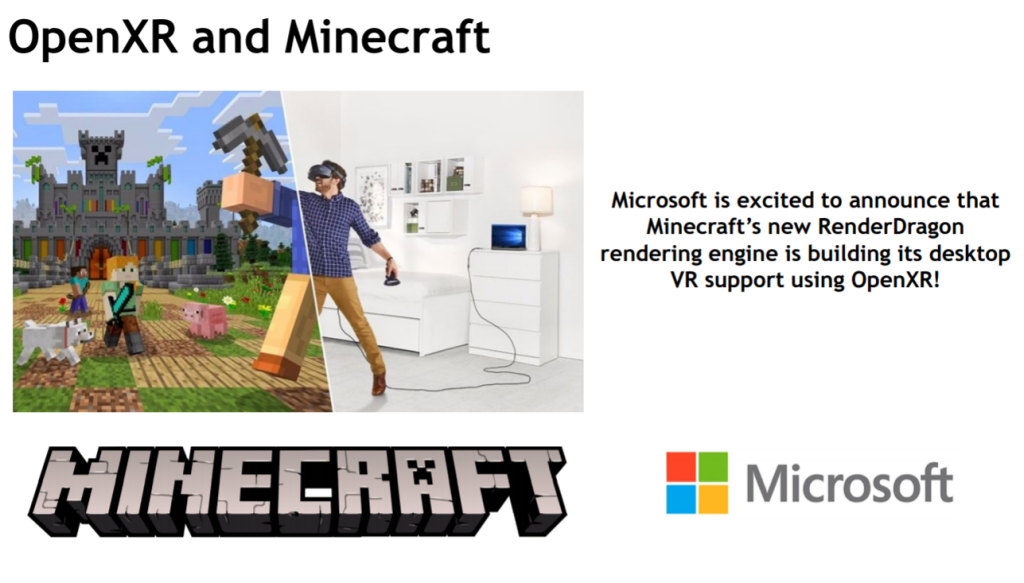 Several key apps and games are expected to start benefitting from OpenXR, notably including Microsoft’s flagship title Minecraft, which the company announced today is using OpenXR in its new RenderDragon graphics engine for desktop PCs. This will enable one build of the popular game to run on Oculus, Windows Mixed Reality, and SteamVR PC headsets, as well as future OpenXR-compatible PC hardware. On the browser front, Google’s Chromium 81 uses OpenXR for WebXR content, so Chrome and Microsoft’s Edge will run on OpenXR-ready hardware. Mozilla’s Firefox Reality supports OpenXR for HoloLens 2.

Industry support for OpenXR continues to be significant, with additional backing from Epic’s Unreal Engine team, HTC’s Vive group, and chip developers ranging from Arm to Qualcomm. Based on the standard’s momentum, additional announcements of OpenXR-conformant platforms are likely to follow in the coming months.