Privacy-focused search engine DuckDuckGo is finally adding walking and driving directions to its online mapping service, a feature that will be powered by Apple’s MapKit JS framework.

The launch comes nearly two years after DuckDuckGo announced it was switching entirely to Apple Maps for map and address-related searches, having previously used a mix of various online mapping services.

While DuckDuckGo has also offered directions since 2016, this necessitated asking the user to choose from multiple third-party services such as Bing, Here, OpenStreetMap, Apple Maps, and Google. Today’s news sees DuckDuckGo leverage Apple Maps to offer users route overviews, distance, and estimated travel time for both drivers and walkers — with the option to change the start and end points at any time — directly inside the DuckDuckGo interface on the web and mobile. 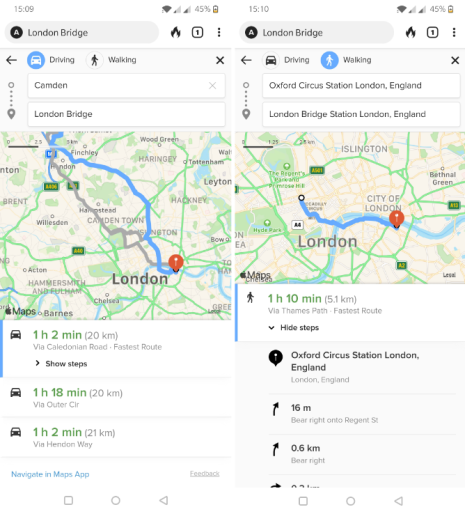 Above: DuckDuckGo: Directions powered by Apple Maps (on Android).

While many people would probably like to use alternatives to Google Search, the fact of the matter is Google has historically offered a “stickier” ecosystem of services that are tightly woven together — so you can go from searching for a bar’s location to finding out how to get there and what time it closes at, in just a couple of taps. But while today’s launch makes DuckDuckGo just that little bit more appealing for those looking to escape Google’s stranglehold, it’s still not entirely friction-free, and it does still ultimately rely on Google on Android.

Anyone who wants access to navigation smarts, rather than having to manually zoom in on the map to look at the route close up or scroll down through a list of turns, will still have to click through to their device’s native map provider. On iPhones, DuckDuckGo users click “Navigate in Apple Maps” at the bottom of the directions. And on Android devices, it points users to Google Maps, albeit inside the DuckDuckGo browser. In this instance, DuckDuckGo serves the user with a warning that “Google is a major tracking network,” but it promises to block Google from seeing their activity.

Above: DuckDuckGo: Directions on Android

Founded in 2008, DuckDuckGo touts itself as the antithesis of Google, insofar as it doesn’t profile or track users around the web. It also promises the same search results for all users, unlike Google, which personalizes results based on historical activity. And today’s launch comes shortly after DuckDuckGo publicly lambasted Google for omitting it as a default search engine option in most markets, having previously featured it prominently.

In an ideal world, DuckDuckGo would probably rather avoid having to work with all major technology companies, but there is a clear balancing act at play here, where it needs to adhere to its privacy-focused principles while also ensuring a certain level of quality in its product. Despite a thorny start, Apple Maps has come a long way over the past eight years, and it is now a vastly improved and credible alternative to Google Maps, making it a decent fit for DuckDuckGo.