When Verizon revealed last week that it was finally bringing high-speed 5G cellular service to Orange County, California, I was genuinely thrilled — the carrier’s 5G Home broadband and 5G Ultra Wideband mobile services launched in 2018 and 2019, but have remained unavailable across most of the United States. Now that’s changing: Verizon’s 5G Nationwide service launched last week, and the carrier also claimed that the “fastest 5G network in the world just launched in Anaheim,” home to Disneyland — only a 20-minute drive from my neighborhood. Disneyland is still closed due to COVID-19, but I jumped at the opportunity to see what millions of users should expect from Verizon 5G ahead of the iPhone 12’s release this week.

Long story short: Instead of experiencing miraculously fast 5G at the world’s most magical theme park, I struggled to find a good testing spot for Verizon’s 5G, eventually getting a five-bar signal outside an Anaheim liquor store. And though I didn’t go inside, I should have, as the rollercoaster-like ups and downs of my testing session left me craving a stiff drink.

The best word to describe those ups and downs is “inconsistency,” a problem that has plagued Verizon’s 5G network since 2018, much to the chagrin of testers, prospective users, and advertising watchdogs. Consistent 5G performance matters because truly transformative changes will only be possible when overall network throughput is increased, and as the past two years have demonstrated, people won’t flock to a network that promises high speeds but delivers them only occasionally and in narrow locations. So Verizon has expanded 5G service, initially by adding more high-speed millimeter wave towers (“5G Ultra Wideband”) in parts of some major cities and more recently by introducing a blanket of dynamically shared 4G/5G spectrum (“5G Nationwide”) across much of the United States. In rollercoaster terms, it’s laying more track so that riders don’t fall off the network as often, or whipsaw as much between peaks and valleys. 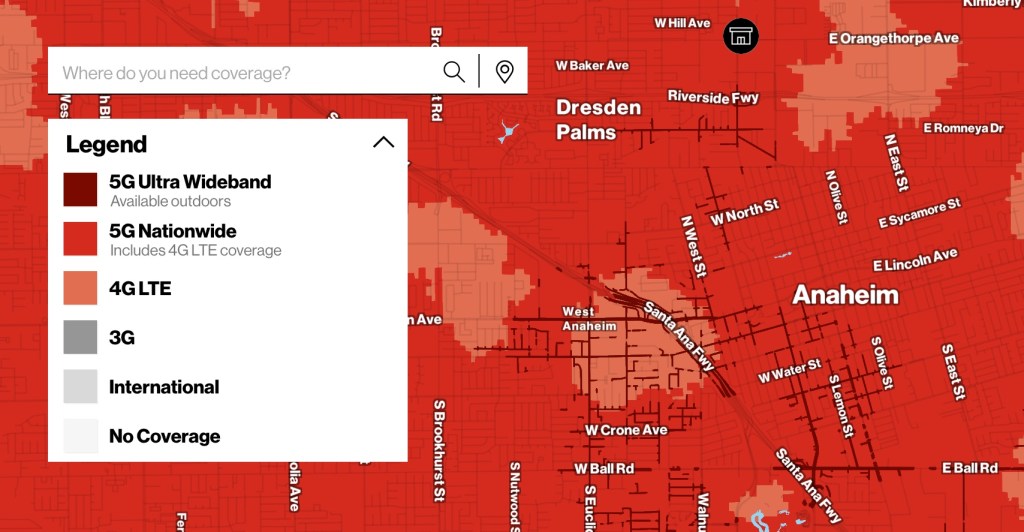 Verizon’s map makes a couple of important disclosures in smaller gray print. It says super-fast 5G Ultra Wideband is “available outdoors,” implicitly acknowledging that it’s not available indoors, and also notes that its 5G Nationwide service “includes 4G LTE coverage.” Initially, I read the latter disclosure to mean that 4G users will continue to find 4G coverage in any bright orange 5G area. But after testing with the MiFi 5G, my impression is that either Verizon is not actually delivering “5G Nationwide” service in some of the bright orange areas, or the hotspot was falling back to 4G because Verizon’s 5G service isn’t very good.

I say that because my Anaheim testing results were as bizarre as those I’ve seen in other Verizon 5G locations. Across multiple supposed 5G Nationwide locations, the hotspot — running the latest firmware — never once showed a standard “5G” icon, though the speeds I saw were sometimes faster than typical Verizon 4G. On the other hand, my hunt for 5G Ultra Wideband took me through Anaheim intersections, occasional side streets, and plenty of parking lots; Verizon’s “5G UW” logo appeared and disappeared unpredictably, not matching the map’s crimson locations. Having to weave in and out of traffic just to find 5G made for a stressful testing experience. 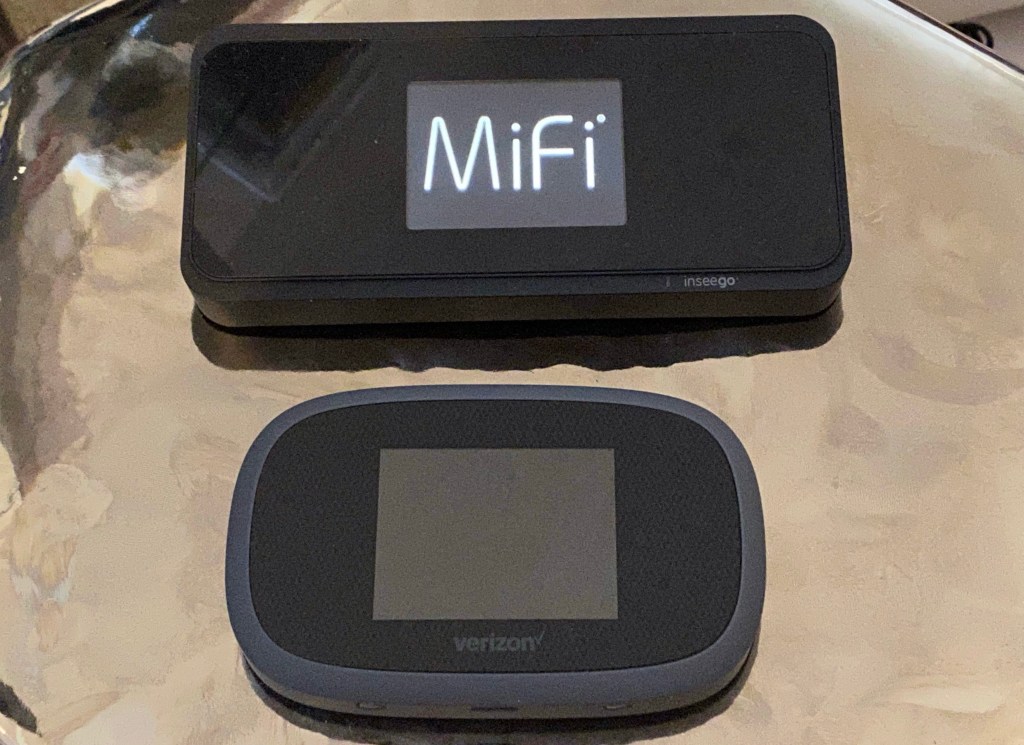 When I finally found a five-bar 5G UW signal at Anaheim’s First Stop Liquor, I ran speed tests showing download speeds in the 732-828Mbps range — less than half the 1.5Gbps to 2Gbps peak speeds we’ve seen from Verizon’s 5G network in the past. On a positive note, that was fast enough for me to download the entire 1.25GB movie Borat in roughly two minutes at 1080p HD resolution, making good on the famous 5G promise that users will be able to quickly grab a movie or multiple episodes of a TV series before boarding a plane. But finding that five-bar signal took a while, and at other spots, the UW icon turned on, but the data rate dipped below 600Mbps. In the parking lot of a nearby Carl’s Jr., where Verizon’s maps claimed 5G UW availability, the MiFi offered a 4G icon and speeds in the 51Mbps range.

Verizon’s download speeds were a lot lower in the supposedly “5G Nationwide” service areas of Anaheim and adjacent cities such as Irvine, where I live. In one neighborhood, I saw only 30Mbps, while another was around 50Mbps and a third was in the low 90Mbps range, all 4G-class numbers. I also recorded speeds in the 150Mbps range in several locations. My belief is that we’ll soon see Verizon and competing 5G networks settle closer to 150Mbps on a national average, which while not strictly “transformative 5G” level will be better than what most U.S. users — not all — have seen from 4G.

Above: The speeds of Verizon’s cellular service vary dramatically from location to location.

Note, however, that all of these numbers were recorded outside, sometimes with an open car window but never far from windshield or side window glass, and never indoors, where the numbers are typically lower due to reduced signal strength. Moreover, the performance changed so dramatically from street to street and block to block that it almost felt like an elaborate gag — a network that occasionally reaches a peak but largely keeps shooting you up and down, back and forth, until you just don’t care to look at the numbers any more.

To be clear, I’m not saying that I found Verizon’s best 5G location in Anaheim, or that I tried to canvas either the entire city or county where Verizon 5G is now available. But I frankly think the whole exercise of needing to hunt for good 5G service on a block-by-block basis is insane, and I don’t want you to get the wrong impression if you see breathless reports of 2-4Gbps iPhone 12 cellular speeds this year. It’s clear that those numbers will only be available at very narrow locations, cherry-picked by Verizon and hand-fed to iPhone reviewers to generate positive coverage.

My results are just a snapshot, but I’m willing to bet that they will be fairly representative of the typical user experience; only your own testing will determine whether my 5G experience matches yours. For now, the good news is that as Verizon’s 5G Nationwide networks and its competitors expand, the cellular performance floor will finally start to get higher for millions of people, regardless of how high the ceiling is in some locations. I hope these improvements reach your neighborhood soon so you’ll be able to take advantage of the long-promised potential of the 5G standard.