Roughly 15% of people live with “some form of disability,” according to World Bank data, equating to some 1 billion people globally. In a world that is increasingly going digital, a movement accelerated by the pandemic, the need for businesses to make their online services accessible to as many people as possible is as important as it has ever been. And this is where Palo Alto startup Evinced is setting out to make its mark.

Evinced has created an enterprise-focused platform that automates many of the processes that software development teams have to follow to build accessibility into the heart of their digital products, spanning the design, development, testing, QA, and production monitoring phases. Founded in 2018, the startup has operated largely under the radar until now, but today it’s officially lifting the lid on what it has been working on, as well as revealing a $17 million series A round of funding, co-led by Microsoft’s venture capital arm M12, BGV, and Capital One Ventures.

Accessibility has become a growing focus for technology companies across the spectrum, with the likes of Google, Facebook, Netflix, and Microsoft itself investing heavily in tools that open their apps to more people. Besides this being the right thing to do, it makes a great deal of economic sense too — people with disabilities represent a substantial market. “If people with disabilities were a formally recognized minority group, at 19 percent of the population, they would be the largest minority group in the United States,” noted a report published by the Institute on Disability (IoD) in 2011.

Moreover, websites that are deemed to not offer equal access, such as providing sufficient compatibility with screen readers, are facing a growing number of lawsuits.

There are several players in the space that Evinced is entering, and while some do offer elements of automation, they generally lean toward the professional services realm, involve a high degree of manual testing, or require developers to inject code into their website to automatically make changes.

As enterprises increase their software development output and embrace continuous integration and delivery (CI/CD), more automation is essential, without taking control away from developers in terms of what changes are rolled out.

“The internet is built for visual consumption,” Evinced founder and CEO Navin Thadani told VentureBeat. “Over the years, we, as sighted users, have been trained to recognize interactable elements like dropdowns, menus, input fields, radio buttons, and many more. So we know how to operate these websites. However, most websites are coded without this ‘semantic’ information and are not machine readable. So assistive technologies, like screen readers — which are machines — do not know if elements are interactable and hence cannot communicate that to the user. This is one of the biggest problems with accessibility today.”

While Evinced does focus on many interactable elements, such as drop-down and navigation menus, the platform also looks for the relationship between components. For example, does a website pop-up offer a clear indication that it’s a pop-up? And is the assistive technology able to read it, communicate it to the user, and so on?

“These are the kinds of things that are completely missed in legacy technology approaches and require a lot of manual testing to uncover them, document them, and communicate with developers,” Thadani said. “Our goal is to automate as much of this as possible.”

To train its system, Evinced said that it collected a “very large visual data set” spanning all the different types of interactable elements, to which it applies “sophisticated rule-sets, computer vision, and other AI models” to ensure it can detect all of them with a high degree of accuracy. “This sets the context,” Thadani said. “Now once we have that context, and we know that a certain element, for example, is actually a drop-down, then we can look at the code and see if it’s implemented correctly. Essentially what we are doing is codifying visual cognition of well-established UX and UI paradigms.”

According to Thadani, Evinced is already working with several large enterprises, including banking giant Capital One, which co-led its series A round. With another $17 million in the bank, in addition to a previously undisclosed $2.5 million seed round raised in early 2019, Evinced is well positioned to bring its products fully to market.

Indeed, Evinced’s offering constitutes a number of individual products designed for different use cases. Dev Debugger is a Chrome extension that serves as a lightweight tool to check a website’s components before code commits or pull requests, which is currently available as part of a SaaS subscription. Then there are two software development kits (SDKs) — Automation, which integrates with existing UI automation tests such as Selenium, Puppeteer, or Cypress for teams that operate rigorous end-to-end UI testing; and an Instrumentation SDK for teams with limited UI testing, which can be integrated directly into a pre-release developer or quality assurance (QA) build. Both SDKs are currently in private beta. 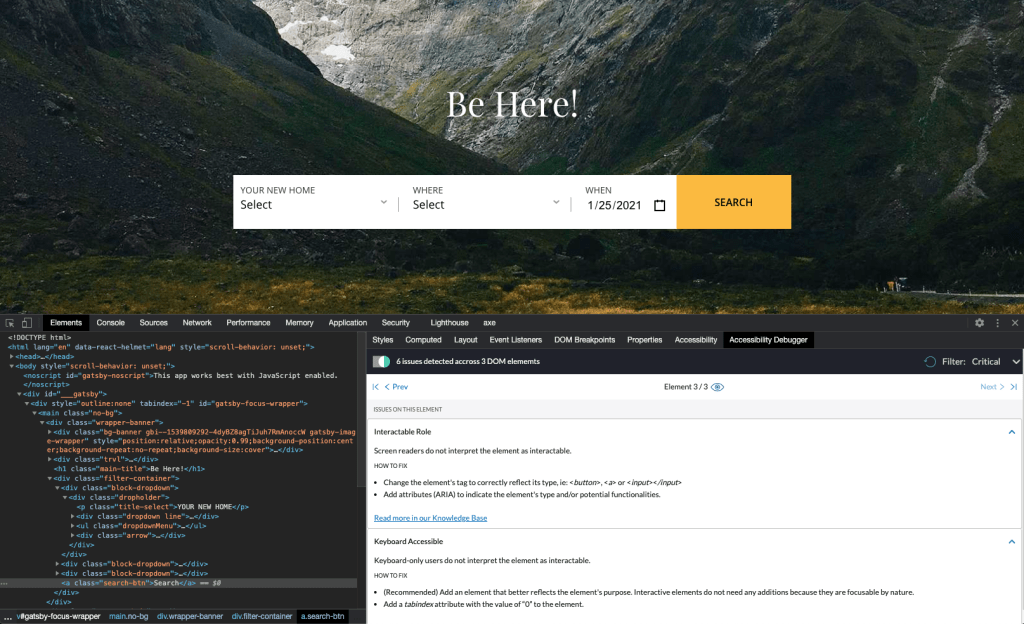 There is also an application programming interface (API), designed for use with continuous integration (CI) systems such as Jenkins and CircleCI, which developers can use to scan pages for accessibility issues when they commit code — this is currently available in private beta.  And then there is the User-flow Analyzer, a Chrome extension that inspects the flows and pages in-depth on what will likely be the final build before release, while Site Scanner is sold as a subscription to accessibility or compliance teams who want to carry out regular or on-demand scans to detect new issues or track old issues, though there is also a free version aimed at the community for which interested parties must apply online. Both User-flow Analyzer and Site Scanner are generally available.

Essentially, all the products are built upon the same core technology, but they are packaged in this way to suit the needs of different businesses. “You should think of them as building blocks that a software development team can use depending on their own processes,” Thadani said.