Edgybees, a provider of georegistration and augmented reality tools for drone operators, today announced that it raised $9.5 million, bringing its total raised to $15 million. The company says the proceeds will be used to drive product research, expand global adoption, and support an “aggressive” hiring strategy.

The commercial drone market was already accelerating, with reports the industry would grow more than fivefold by 2026 from the $1.2 billion it was reportedly worth in 2018. But the pandemic has increased demand for drone services in areas such as medical supply deliveries and site inspections. Honeywell, a major supplier of aerospace systems, launched a new business unit covering drones, air taxis, and unmanned cargo delivery vehicles. And in early January, startup American Robotics snagged the first-ever U.S. Federal Aviation Administration (FAA) approval to fly automated drones beyond the line of sight.

Palo Alto, California-based Edgybees was cofounded in 2017 by Adam Kaplan, Nitay Megides, and Menashe Haskin. Haskin was formerly an engineering manager at Amazon, where he headed the software team for Amazon’s Fire TV platform and the Amazon Prime Air development site in Israel.

Edgybees claims its platform addresses the challenge of piloting drones with decreased air visibility from flames, smoke, and chemical spills. The company augments live video feeds from drones with geoinformation layers like maps, building layouts, points of interest, user-generated markers, and more captured from cameras or other data sources, leveraging a combination of computer vision, data analytics, and video synthesis. 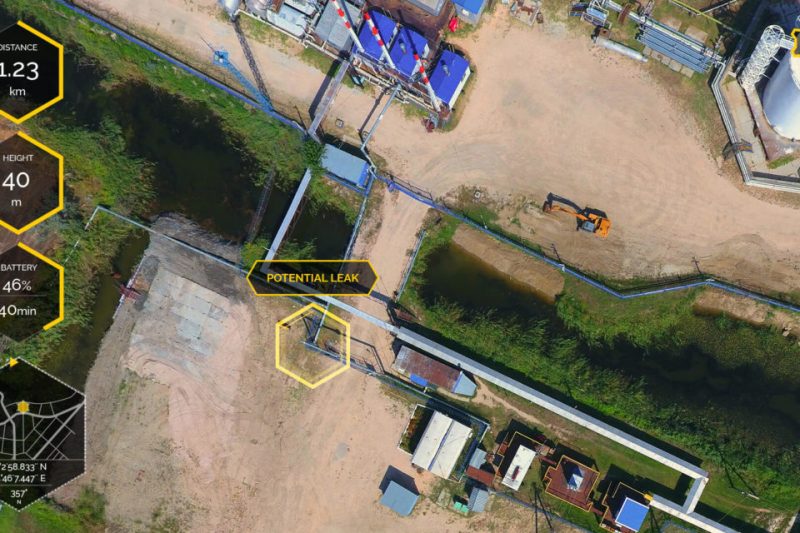 Edgybees’ technology was first applied to an augmented reality racing game for drones, released in partnership with DJI in early 2017. Later that year, Edgybees debuted First Response, a drone flying app first deployed by officials operating in the Florida Keys in the aftermath of Hurricane Irma. First Response was also used by local authorities to track firemen’s locations during the Northern California fires in October 2018, according to Edgybees.

More recently, 36-employee Edgybees was awarded a contract from the U.S. Air Force following a round of awards the company received at the end of 2019, some from AFventures’ Strategic Finance Program (StratFi). And in March, Edgybees inked a deal with AFWerx, an innovation program within the US Air Force, to integrate its technology with the U.S. Air Force’s systems.