Zoom has announced that Amazon’s business-focused Alexa integration is now available for everyone in Zoom Rooms appliances. The launch comes a day after Zoom launched a new Immersive View feature that allows meeting hosts to arrange participants in a single virtual environment.

Amazon launched Alexa for Business back in 2017 to bring the tech titan’s voice assistant to enterprise communication tools such as Cisco, Polycom, and Zoom itself. This meant companies using these tools could say something like, “Alexa, join my meeting” to start their call or “Alexa, find me a free room.” This was made possible due to an array of features Amazon had previously launched to make Alexa more compatible with office environments, including the ability to integrate with video- and audio-call software and integrations with Office 365 and Google Calendar.

Getting down to business

At its annual Zoomtopia event back in October, Zoom announced that Alexa for Business would eventually arrive for Zoom Rooms Appliances, a program Zoom launched back in 2019 to bring dedicated Zoom hardware to meeting rooms around the world. This launched in beta in January, and now it’s ready for prime time. 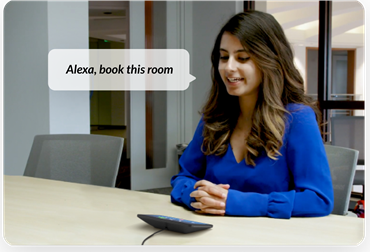 With this integration, companies can start and stop all their Zoom Rooms meetings using voice commands, as well as finding available rooms in the building to host a meeting by asking something like: “Alexa, find me an available room for 45 minutes.”

As the world tries to regain some semblance of normality, businesses will be exploring new contactless ways to run their meetings. With Zoom Rooms and Alexa, a small team in one office can communicate with another team in another office without having to touch any buttons.

It’s worth noting that businesses could already set up Zoom Rooms, which is basically Zoom’s software product for physical conference rooms, to work with Alexa on Amazon’s own Echo hardware and other third-party devices such as Logitech’s. But today’s announcement opens Alexa to businesses that don’t have (or don’t want to buy) other Alexa-enabled devices, as admins can now enable Alexa for Business directly through the Zoom management portal.