Data recovery startup Acronis today announced that it raised $250 million at a valuation of over $2.5 billion post-money. The funds bring Singapore- and Switzerland-based Acronis’ total raised to over $408 million, following angel, debt, and later-stage raises from March 2014 to September 2019. Founder and CEO Serguei Beloussov said the new funds will be used to acquire more companies, expand Acronis’ engineering team, and build over 111 datacenters around the globe.

There are few catastrophes more disruptive to an enterprise than data loss, and the causes are unfortunately myriad. In a recent survey of IT professionals, about a third pegged the blame on hardware or system failure, while 29% said their companies lost data because of human error or ransomware. It’s estimated that upwards of 93% of organizations that lose servers for 10 days or more during a disaster filed for bankruptcy within the next 12 months, with 43% never reopening. Those statistics are more alarming in light of high-profile outages like that of OVHCloud earlier this year, which took down 3.6 million websites ranging from government agencies to financial institutions to computer gaming companies. 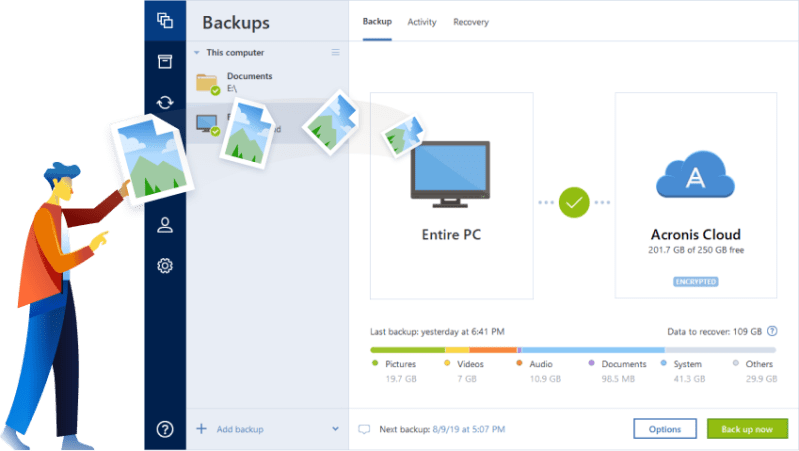 Acronis traces its origins to Parallels’ corporate parent SWsoft, where Beloussov, Ilya Zubarev, Stanislav Protassov, and Max Tsyplyaev founded it as a separate division in 2001. Acronis spun out in 2003, after which it pivoted focus from disk partitioning and bootloader utilities to backup and disaster recovery software based on disk imaging technology. Over the next decade or so, it acquired three firms — BackupAgent (specializing in cloud backup), nScaled (disaster recovery), and GroupLogic (enterprise data transformation and storage) — and launched a global partner program, prior to which Acronis started an R&D wing in Acronis Labs.

Acronis Backup and Acronis Backup Advanced, two additional products in Acronis’ disk-based backup and recovery suite, protect files from modification and encryption while minimizing process disruption to a few seconds. Through a centralized management dashboard, admins can back up to cloud storage providers and convert backups into a set of virtual machine files that can run on hypervisors.

Aside from backup software, Acronis also offers Disk Director, a shareware app that partitions machines and allows them to run multiple operating systems. Disk Director joins Acronis Snap Deploy, which creates a standard machine configuration that can be deployed across up to hundreds of live Windows computers simultaneously. Acronis Files Advanced secures access to files that are synced between devices. And Acronis Access Connect enables Mac users to connect to and mount directories on a Windows file server just as native Apple Filing Protocol volumes.

Acronis occupies a data backup and recovery market anticipated to be worth $11.59 billion by 2022, according to Markets and Markets. It competes to a degree with San Francisco-based Rubrik, which has raised hundreds of million in venture capital to date for its live data access and recovery offerings. There’s also Cohesity, which has raised over $650 million, and Clumio, which raked in $186 million so far for its cloud-hosted backup and recovery tools, as well as data recovery companies Veeam and HYCU.

But Beloussov claims that Acronis has rivals beat when it comes to install base. The company now counts over 5.5 million consumers and 500,000 businesses among its client roster, including 80% of the Fortune 1000 companies.

Since its previous funding round, Acronis has made a string of acquisitions including of consultancy CyberLynx, cloud management startup 5nine, distributor Synapsys, and endpoint data loss prevention firm DeviceLock. The company also launched cloud datacenters in Canada and Brazil and launched a new, no-cost version of its Cyber Protect Cloud service provider solution.

Acronis has more than 1,300 employees in 18 countries, the bulk of whom are based in Singapore, Bulgaria, and Arizona. Acronis Labs is based in the U.S. and Singapore.